Today’s very efficient irrigation technologies use less water to grow higher yielding crops than in the past. But irrigation farmers can increase their productivity even more by fine-tuning the other components of their crop production systems.

Fine-tuning irrigation agronomics
“From an agronomic standpoint, the first thing I tell irrigation farmers is to really look at your crop rotations,” he says.

“Some farmers might only grow two or three crops in a rotation, but often it’s better to grow four to six. A longer rotation helps build soil quality, and break disease, insect and weed cycles. You’re also using a broader variety of pest control products, instead of using the same ones again and again, so you reduce the risk of developing resistance.”

His second tip is a reminder to select crop varieties with the best ratings for yield, quality and disease tolerance. “Many farmers will keep growing a variety if they are happy with it. But over a five- or six- or seven-year period, its disease resistance will gradually break down. That means the farmer may have to use fungicides more frequently, and his yields tend to go down as well. So it’s wise to utilize the best varieties available, which means changing varieties periodically.”

Fertilizer management is crucial to realizing the increased crop yield potential offered by today’s higher yielding varieties, improved irrigation applications and agronomic advances. “If we’re going to increase our productivity by 15 or 20 or 30 percent, our yields are going to be that much higher, so we’ll need that much more nutrient to achieve those optimum yields,” notes McKenzie. “For optimum fertilizer management, we’ll have to gradually increase nutrient applications proportionally with increasing crop yield.”

He is currently updating the fertilizer recommendations for 11 irrigated crops, based on the results from a recently completed AARD study. This four-year study, led by McKenzie, examined a wide range of agronomic factors for optimizing irrigated grain and oilseed production. The study’s fertilizer component evaluated different fertilizer products, rates, timing and placement for the 11 crops.

The fertilizer experiments showed that today’s crop varieties tend to have a much higher yield response to nitrogen than varieties from earlier decades. The experiments also found minimal differences among urea, ESN (polymer-coated slow-release nitrogen), and anhydrous ammonia under most conditions; fertilizer placement is more important than the type of fertilizer.

“Banded fertilizer, either side banded or banded ahead of time, is usually about 20 percent better from an efficiency standpoint than broadcast/incorporated fertilizer,” says McKenzie. Ideally, he suggests application of nitrogen at the time of planting for best efficiency of uptake and crop yield potential.

For best fertilizer management, McKenzie is a strong proponent of soil testing. He points out that when you know your soil-test nitrogen, phosphorus, potassium and sulphur levels, then you can make excellent, informed decisions on which fertilizer products are needed and the appropriate rates.

The value of early seeding was clearly proven in that same four-year study. “Seeding earlier almost always has a higher yield potential for most cereal and oilseed crops,” notes McKenzie. “If farmers can seed their cereal crops in late April or even mid-April, it can mean a substantial increase in yield potential with irrigated production. For example, for feed or malt barley, you lose about 1.2 or 1.3 percent of yield potential every day that seeding is delayed after May 1. So if you delayed seeding from May 1 to May 15, you’d have more than a 15 percent reduction in yield potential.”

Canola is the one exception – he suggests seeding it after May 1. “There is a yield advantage when seeding canola earlier, but if it’s seeded before May 1, the probability of frost is greater, and this must be taken into account.”

The study also determined new optimum seeding rates for optimum yields under irrigation for the 11 crops. These new rates are higher than the rates used by many farmers.

The new optimum seeding rates in seeds per square foot and in pounds per acre are available in AARD’s Optimum Seeding Date and Rates for Irrigated Grain and Oilseed Crops (Agdex100/561-2). If you know your target plant population and the 1000-kernel weight of your variety, you can use the seeding rate calculator on AARD’s website (www.agric.gov.ab.ca) to calculate the pounds per acre of seed needed to achieve that target. The new factsheet also has information on potential yield loss for each crop when seeding is delayed from mid-April to early June.

Early weed control is another important practice. With earlier control, the weeds have less time to compete with the crop for water and nutrients, so the crop’s yield potential is higher.

For diseases and insect pests, McKenzie recommends scouting and then only applying fungicides or insecticides if critical thresholds are reached. “If farmers spray insecticides when it’s not necessary, they may harm beneficial insects.

“Doing all the other agronomic practices to reduce disease and insect pressures – crop rotation, variety selection, early seeding – can help reduce a farmer’s dependence on fungicides and insecticides,” he adds.

Water management tips
Yet another experiment in that same irrigation study investigated water use and water use efficiency for the 11 crops. One of the key findings was the importance of keeping soil moisture between field capacity and 60 percent of field capacity.

“Most of our annual crops, like wheat, barley and canola, typically root down to about 36 to 40 inches deep. However, wheat, barley, canola and triticale take about 70 percent of their water from the top half of their root zone, the top 20 inches,” says McKenzie. “If you maintain soil moisture between 60 and 100 percent of field capacity in the top half of the root zone, then it’s readily available and the plant never suffers from a lack of water. That will give you the best water use efficiency and the best yields for your irrigated crops.

“However, if you allow the moisture to drop lower and lower below 50 percent of field capacity, then the plant has to work harder and harder to take up moisture,” he adds. “If you also happen to have hot weather when the plants are actively growing, then the plants will start to wilt during the day. They recover at night, but while they’re wilting, you are losing yield potential.”

Farmers with pivot systems can apply light, frequent applications of water, which is the best way to keep soil moisture in the right range. McKenzie suggests irrigating to bring the moisture up to 100 percent of field capacity, then allowing the moisture to fall to about 60 percent of field capacity, and then irrigating again to bring it back up to 100 percent.

McKenzie says every irrigation farmer should have a soil auger in the back of his pickup truck and be augering in every field each week to check soil moisture and plan irrigation applications to ensure soil moisture is maintained in the readily available range. He also suggests farmers download the Alberta Agriculture software program AIMM (Alberta Irrigation Management Model) to assist with irrigation scheduling management.

Variable rates for variable fields
According to McKenzie, variable rate irrigation could be worth considering in the future if you have quite different soil textures or variable topography within a field. For instance, if some parts of a field are sandy and other parts are heavier textured, you could apply a somewhat higher rate of water on the heavier textured soils and a little lower rate on the sandier areas to prevent overwatering or deep percolation.

If you have rolling land with eroded knolls, you could apply less water to the knolls to reduce runoff from the knolls into the low spots. Excess water in low spots could cause the pivot to get stuck, the crop to drown or crop maturity to be delayed in those low areas.

Another option for rolling land is to use variable nutrient rates. “If irrigated land has variable topography, the knolls almost always tend to have lower organic matter and lower fertility. So farmers could consider applying more nutrients to eroded knolls to help improve crop yield and crop productivity,” says McKenzie. “That will help return more roots and more organic matter back to the soil, and you’ll gradually build the quality of the soil in that eroded knoll, so it becomes more productive over a period of years.

“You might think that, because the knolls are less productive, we should put less fertilizer on. But I take the opposite view: you’ve got the irrigation water, and we have the heat, so you have the potential for more productivity,” he adds.
To improve eroded knolls, his top choice is to apply manure to the knolls. Manure adds organic matter and nutrients, which improves the soil’s fertility status and its physical quality. The improved physical structure also enhances the soil’s capacity to absorb moisture so there would be less runoff.  If you don’t have access to manure, he suggests soil sampling the knolls separately from other areas of the field, and then using the soil test results to guide fertilizer rates on the knolls. 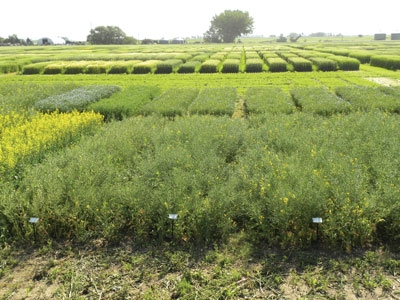 The new optimum seeding rates for irrigated cereal and oilseed crops are higher than the rates used by many farmers ( Today’s very efficient irrigation technologies use less water to grow higher yielding crops than in the past.