In a world of full of bigger tractors, larger farms, increasing inputs and ever-growing yields, it’s hard to believe that something so small can make such a huge difference.

Yet, a tiny parasitic wasp named Copidosoma bakeri can mean the difference between a successful harvest and a crop failure.

“Most of our crop pests have at least one parasitic wasp that attacks them,” says Jeremy Hummel, instructor, plant and soil sciences, in the agricultural technology program at Lethbridge College.

Copidosoma bakeri attacks the cutworm, which can be a devastating pest producers contend with, but there are other species of parasitoid wasps that focus on other pests, including the pea leaf weevil, the cabbage seedpod weevil and diamondback moth.

In August 2012, Hummel collected sweep samples from a barley field near Lethbridge, Alberta. The field had been harvested for silage two weeks before collection; the vegetation included weeds and barley, and the field was bordered by mixed grassy vegetation. Natural enemies were collected in every single sample taken – and they weren’t all parasitoid wasps. There were also predatory and/or parasitic flies and true bugs as well, but while all are beneficial, the unsung hero is Copidosoma bakeri.

C. bakeri is a parasitoid, which means it’s a little bit more sinister than the average parasite. “A parasitoid lives on or in its host – feeding on it – but eventually the parasitoid matures and finally leaves the host, and then it kills it. A traditional parasite like a tapeworm will live in a host, but it’s not advantageous to that tapeworm to kill the host,” explains Hummel.

The cycle of life isn’t always pretty, and the life cycle of C. bakeri isn’t for the squeamish. The female lays her eggs inside the cutworm, which is still very much alive – and because C. bakeri can lay multiple eggs, she can infect many different cutworm individuals.  But wait – there’s more to this horror story.

“She takes it to the next level where not only can she lay many eggs, but every one of those eggs clones itself into hundreds, or even more than 1000 young,” says Hummel.

And all of those young larvae are very, very hungry. “Eventually as hundreds and thousands of these little wasps continue to grow, they actually consume every square micrometre of the inside of the cutworm so that all that’s left at the end is a mummified shell. The wasps will fill up the eyes, and they’ll fill up the tiny little legs of the cutworm. Every piece of that cutworm is utilized to produce wasp biomass,” notes Hummel.

As grotesque and amazing as it may sound, it’s an incredibly effective, natural and inexpensive pest control method.

“When they emerge, you get this massive exponential increase in the parasitoid population, then they all go and do the same thing, which can really decimate a cutworm population,” says Hummel.

While C. bakeri’s ability to clone itself is impressive, all pest insect predators aid healthy crop production. “They usually have a very significant role in managing insect pest populations at below-threshold levels,” notes Hummel. “One of the reasons we typically see insect pest outbreaks only every number of years – and not every single year multiple times over – is because of these natural enemies that work behind the scenes to manage the population.”

Parasitoid wasps are solitary, and aren’t defensive like communal wasps such as the yellow jacket, which have a hive to defend. The young feed on the cutworm, but their parents develop a different palate, and producers must meet those menu demands if they want the parasitoid to work for them.

“As adults, many of these natural enemies don’t feed on their larval host. They lay their eggs in the cutworm, but they need to feed on an alternate food source and most of them rely on nectar,” says Hummel.

That essential food source can come from wild flowers and flowering plants in ditches and shelterbelts. “The greater the diversity we can have – in theory – the greater diversity of plant life, the more resilient the natural pest control is.”

In an area with little flowering vegetation bordering crop fields, producers may find unexpected allies. “At low densities, weeds that have been appropriately controlled aren’t doing a lot of crop competition impact,” says Hummel. “A tiny amount of even background weedy vegetation can supply some of these parasitoids with what they need.”

In the field where Hummel collected samples, there were weeds present such as lamb’s quarters, prickly lettuce, prostrate knotweed, redroot pigweed, storksbill and wild oats. “I know we like to have perfectly clean fields, and that’s all fine and good, but at a certain point you could almost say there’s an economic threshold for weeds as well. If we can use all parts to what’s going on in our fields, even background weedy vegetation, then that’s to our benefit,” notes Hummel.

When something happens in the environment – such as a lack of adult food for parasitic natural enemy species, insect pest outbreaks can still happen. “We sort of fall back on chemical controls a lot when we have outbreaks because they are very effective at controlling pest outbreaks. But we need to make sure that chemical control is warranted for a pest population.”

Most pesticides are non-specific, which means many (or most) other insect species are also going to be killed – even the ones producers need. The trouble is that beneficial insect populations take a lot longer to recover, which can lock producers into a cycle of expensive pesticide use.

“Pests mass-produce low-quality young to flood the market, whereas natural enemies tend to produce a lower number of high-quality young, and that takes an increased amount of time to build their population,” says Hummel. “You think about the movies that we see about the savannah and you don’t see thousands of lions running. You see thousands of wildebeest and just a few lions that prey on them.”

Hummel and colleagues in British Columbia, Alberta, Saskatchewan and Manitoba are collecting data on cutworm outbreaks. Though cutworms have traditionally been thought of as cereal pests, they’ve become a concern in canola fields, and the Canola Council of Canada is funding research to investigate further.

“There are five to seven species that will cause damage to crops, but there are many more than just those that we know exist in Western Canada, and we just don’t know if they are doing a substantial amount of crop damage,” says Hummel, who adds that being able to identify different cutworm species will help agronomists and producers learn more about their biology, and in turn, develop better management protocols. 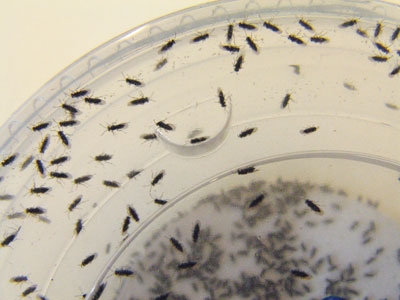 While their young need cutworms to grow A tiny parasitic wasp