When it comes to spraying, agronomists say it’s all about timing. A corn-soybean-winter wheat rotation has demonstrated benefit for corn and soybean yields. Winter wheat in the rotation leads to less pressure from weeds, insects and diseases. According to Peter Sikkema, University of Guelph professor of weed management, a good stand of winter wheat can be extremely competitive. “In many cases, the wheat crop outcompetes the weeds.”

In over eight years of study at Ridgetown, researchers discovered what would happen if they didn’t control weeds in plots of corn, soybeans, dry beans, spring cereals and winter wheat. Yield losses were an average of 59 per cent in dry beans, 51 per cent in corn and 37 per cent in soybeans. In spring cereals the loss was 12 per cent. In winter wheat, on average, they documented a yield loss of only three per cent due to weed interference.

A comprehensive timing study was conducted in 2009 and 2010 at the University of Guelph. Sikkema and his colleague, Francois Tardif, were advisors to the project. Melody Robinson did the field research, using the Zadoks scale for timing of herbicide and fungicide applications, with help from Mike Cowbrough, a weed specialist with the Ontario Ministry of Agriculture, Food and Rural Affairs (OMAFRA).

The team did studies at four locations (Elora, Exeter, Ridgetown and Woodstock) with three herbicides and four fungicides. The mixes were applied early, in cold conditions and late. The herbicides tested were dichlorprop/2,4-D (Estaprop), bromoxynil/MCPA (Buctril M) and pyrasulfotole/bromoxynil (Infinity). The fungicides tested were pyraclostrobin (Headline), tebuconazole (Folicur), trifloxystrobin/propiconazole (Stratego) and azoxystrobin/propiconazole (Quilt).

For the timing study, late applications were applied at Zadoks stages 37 to 39 (flag leaf emergence). Early application timing was based on weather conditions, but ranged from Zadoks 14 to 21.

As a general rule, injury was visible shortly after application but it did not reduce winter wheat yields. Late-applied tank mixes were more likely to cause injury than early applications. Dichlorprop/2,4-D plus tebuconazole was consistently the most injurious tank mix. It caused dark brown to black foliar flecking where the spray droplets contacted the leaf surface.

According to Robinson, using the Zadoks scale “lets you pinpoint the growth stage a lot better. When we get close to heading, Zadoks stages become really important for proper fungicide timing.”

The general recommendation for weed management with winter wheat still holds true, according to Sikkema. “If you have weeds at such numbers that they are going to cause yield loss, you are much better to spray in late April or early May than to delay the application until weeds are bigger – that just results in greater yield loss. Early application is recommended for two reasons: your margin of crop safety is greater. Yield loss due to weed interference is reduced, as it is with any crop.

“The important thing is to get the herbicides on before stem elongation,” he adds. “That gives you a pretty good margin for crop safety. If you have flag emergence, your potential for crop injury increases.” 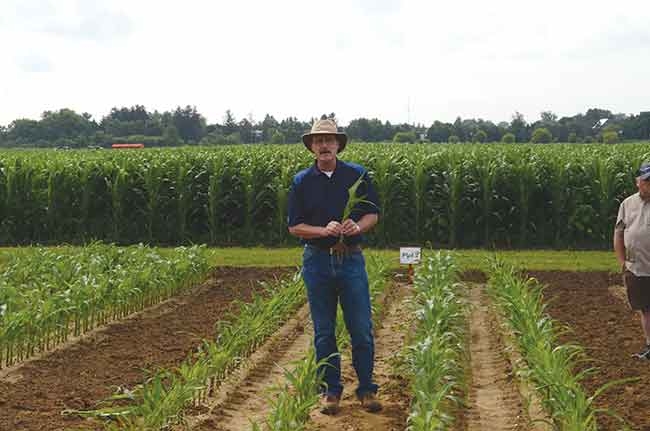 
Related
In herbicides, timing is everything, too
Assessing winter wheat stands for winter survival
For weed control in wheat, timing continues to be everything
Target correct timing for optimum wheat midge control