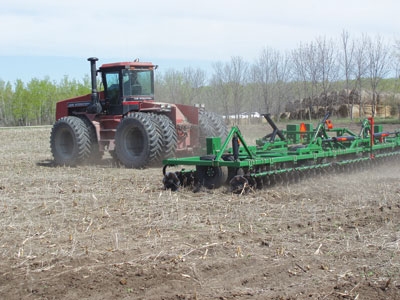 The Summers Supercoulter is equipped with eight-wave For a generation

For a generation, no-till, zero-till, min-till, one-pass, minimum disturbance has been the gospel of successful modern farming on the Prairies. And now, along comes “vertical tillage” as a new option for a new generation.

Vertical tillage implements are being promoted as a way to till the land without disturbing all the standing stubble. At the same time, the implement penetrates deeply enough to fracture a shallow hard pan. The goal is to help manage heavy crop residue and allow the surface to warm up and dry more quickly.

Many choices
Farming in the Arborg, Manitoba, area, Roger Burak saw his first vertical tillage tool when a demo Salford RTS came into the area in late 2009. He also works for Manitoba Agriculture, Food and Rural Initiatives (MAFRI) in the Agriculture Diversification Centre program and with a local producer organization to research innovation in agriculture. “A lot of farmers, even ourselves, were trying to get any kind of tillage equipment just to get the residue knocked down. Nothing was really working,” Burak says. “We demo’d the Salford and for the conditions we had, the results were very promising.”

As a result, through his MAFRI diversification office, Burak was able to bring three vertical tillage machines to the area for a day of demonstrations in May 2010. “There are quite a few vertical tillage tools out there now. Lots of smaller manufacturers are getting into it, trying to satisfy niche markets,” says Burak.

Common to the vertical tillage implements is a vertical disc, or coulter, that slices down through field debris and soil, rather than travelling in a horizontal plane attached to a shank. In the simplest form, it amounts to adding a coulter and bearing to a deep tiller shank. “A wavy coulter blade seems to give the best residue management, and seems to prevent the hairpinning you see with a conventional coulter,” says Burak. “It also curves side to side in the soil, so you get more aeration and more surface disturbance.”

Summers Manufacturing, based in Maddock, North Dakota, and Salford Farm Machinery, from Salford, Ontario, each provide a dedicated vertical tillage implement with coulters that cut a straight-down, wavy line. Tandem and offset disc configurations are multiple-use,

adjustable tools that can create soil disturbance in a variety of ways. “If you angle the gang, you’re starting to get into a small amount of soil smearing like you would with a regular disk. It’s no longer true vertical tillage. The Tatu and the Till-Tech Twister are examples of that,” explains Burak.

The Tatu is a product of Marchesan S/A, and is manufactured in Brazil. Till-Tech Systems is located in Straffordville, Ontario. “If you go through a stubble field with a tandem disk, it will turn over the soil and the trash, and combine them. The vertical tillage machine will pretty much leave the stubble standing and sort of mix the top two inches of soil. It’s as close as you can get to a middle ground between zero-till and conventional tillage.”

The vertical tillage tools, adds Burak, are best suited to the zero-till or minimum-till farm where growers need to condition the soil “a bit” without disturbing more than an inch or two.

Summers’ Supercoulter
“We had to do something different. We were harrowing every year and it just didn’t seem to get the job we wanted on our field residue,” says Chris Claeys, a grower from Deloraine, Manitoba. Claeys began using a 40-foot Summers Supercoulter Plus in late summer 2010 on his grain farm in southwestern Manitoba

The Claeys family farm has been in minimum-till for 15 years. Their challenge was straw management, and they wanted to get dirt on the old straw to speed breakdown, but they wanted to avoid losing the stubble. On the hottest, driest day of the summer, a heavily weighted harrow would not move enough of the clay-loam soil. “We just weren’t getting enough action, enough penetration,” Claeys says.

They looked at a Salford RTS and considered the Case IH Turbo-Till. For their needs, the Case IH implement moved too much dirt, he says. “We didn’t think the Salford moved as much dirt and it didn’t chop the standing residue, like curled dock stalks, as well as the Summers,” he says. “The Summers has five-inch spacing, as compared to the Salford’s seven-inch spacing, and it has a notched blade, which seems to chop a little more residue, and have a little better penetration. It acts like a scissor every time it goes into the ground. And, the Summers’ factory is close, compared to Salford, Ontario.”

Cost also is a factor, Claeys says. He had nothing for a trade-in on “one of the more expensive” tillage tools. He had to pay “around $70,000” for the fully loaded Supercoulter.

The Supercoulter is equipped with eight-wave, front-rear, notch blades. These are followed by a three-bar heavy harrow and, new in 2010, a set of rolling baskets. The spring-loaded baskets are formed of one-inch steel bars that smash the clods of dirt and root balls. “It spins really fast because it’s such a small diameter, at 10 mph, so it really breaks up any lumps. There wasn’t a whole lot of trash left on top, but what is left has dirt on it and the seedbed is sealed.”

Tillage action for the soil is vertical rather than horizontal. The coulters split and aerate the soil. “You’re mostly opening it up, fracturing it, allowing the water and roots to move down. The blade fractures another three inches, maybe more, below the cutting depth. Now, our roots are going to go down deeper, to find the moisture and the nutrients, rather than flattening out an inch under the ground,” explains Claeys.

He did a trial run in late fall with his air seeder, to check what kind of seedbed he would have for spring after doing the vertical tillage run. He concludes, “It did a fabulous job.”