Cover crops are not yet grown much in Canadian fields. However, tillage radish, a fast-growing, all-natural cover crop from Pennsylvania-based Cover Crop Solutions, may just change that.

According to Patrick Fabian, tillage radishes do everything from increasing nutrient availability for subsequent crops, to suppressing pests and supporting healthy saoil organisms, to improving water and air movement through soil. That, combined with the fact that studies now show yield increases of up to 10 and 11 percent respectively in soybeans and corn planted into decomposing tillage radishes, means this cover crop is making significant waves south of the border. While still brand new to Canada – 2013 will be just their second year available in this country – expect to hear much more about tillage radishes in the near future.

“Tillage radishes are an important new tool in producers’ toolboxes,” says Fabian, a certified seed producer in Tilley, Alta., and the Alberta/B.C. territory rep for tillage radishes. “There’s no question that they are going to be part of the western Canadian landscape in a big way. Down in the States, they’ve caught on like wildfire.”

Tillage radishes are daikon radishes with a thick white tuber that can grow up to 18 inches in length, and a single long taproot that can easily bring the plant’s total rooting depth to four feet or more. Very aggressive when rooting, tillage radishes can exert 290 pounds per square inch of pressure as they drill down, which allows them to punch their way through compacted soil and hardpan. When they decompose in the soil, the natural pores left behind serve as ideal water and air movement channels, greatly increasing the surrounding soil’s health.

The long taproot also allows the plant to access nitrogen and other nutrients that are deeply buried and inaccessible to shallower growing crops. So long as the radishes are left to decompose naturally in the spring, the salvaged nutrients brought up from depth and stored in the radish tubers will be slowly released to the roots of subsequent crops.

“If you start with 40 pounds of nitrogen in the top foot of your soil in the fall, tillage radishes will leave you with 60 to 80 pounds of nitrogen stored in the tubers by the next spring,” says Kevin Elmy, a western Canadian distributor for tillage radish and co-owner of Friendly Acres Seed Farm in Saltcoats, Sask. “Calculating based on a cost of $0.70 per pound for nitrogen, that 20-pound increase in nitrogen is a $14 per acre benefit.”

Tillage radishes are the result of a dozen years of selective breeding. The original forage radish genetics from Quebec interested researchers because they hoped its natural bio-fumigant properties would suppress nematodes in soybeans. In fact, it turns out that the tillage radish’s combination of natural heat, fast growth and nutrient capturing capabilities helps manage multiple pests.

“If you take a crop off in the fall and for six weeks before freeze-up there is nothing growing, all the microbes in the soil are basically starving,” explains Elmy. “If you can grow a quick crop like tillage radishes, it’ll feed the good microbes so that the bad microbes don’t have an opportunity to take over.”

On the weed front, tillage radishes offer excellent winter annual weed control. Because their foliage grows so quickly, they can be planted as late as three weeks before a first frost and will effectively outcompete weed species.

Additional pest management benefits are currently being studied. Early evidence from the American northeast suggests they may effectively ward off wireworms in potatoes. And, Elmy says, they may also help protect canola from clubroot.

From a management perspective, tillage radishes’ quick growth offers benefits. Their dense foliage provides erosion protection both to sparsely leaved crops such as potatoes and beans during the growing season, and to otherwise empty fields through the winter. And, like the original forage radish from which they descend, tillage radishes offer a fast way of creating very palatable forage for cattle and sheep.

For best results, err on the side of planting later rather than too early. Daylight sensitive, if these radishes are planted too early, they will not produce much root because they will focus their energy on bolting and seed production. But planted after summer solstice, they will respond to the decreasing hours of daylight by putting energy into developing a root tuber that in warmer climates would survive the winter.

“If you seed them May 5, they will look like a canola plant – they’ll be four feet tall and after 85 days, the root will be three inches long. But when they were planted Aug. 15, 28 days later the root was 12 inches long,” says Fabian.

“It’s a very versatile crop that can be seeded virtually any way you like, and they are very user-friendly,” says Fabian. “They do not require any additional fertility to get them going, so you can basically seed them and forget them.”

This past year, Elmy and Fabian expected to bring in enough seed for 15,000 to 20,000 acres. Fabian expects that number to grow easily to half a million acres in the next couple of years.

“Tillage radishes are a tool just like any other tool in a farmers’ toolbox,” he notes. “It’s just like GPS for your tractor. Can you get by without it? Definitely. Did we get by without it for many years? For sure. But, is it something that will make farms more efficient and more profitable? Absolutely.”

Elmy agrees. “Cover crops add sustainability. On our farm, what I’m looking at is reducing risk and increasing profitability by keeping my net farm income the same with half the inputs,” he says. “Tillage radishes suit anyone who wants to use biological processes to help improve productivity.” 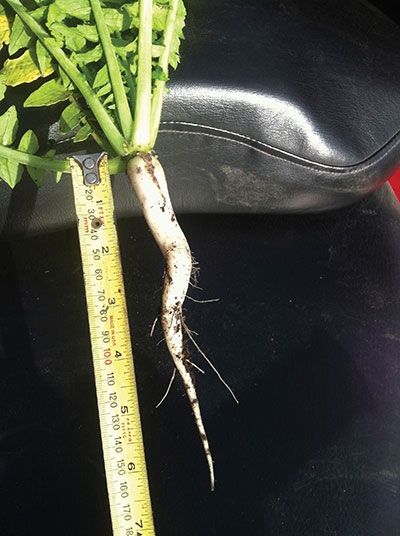