“Some of our best land with high organic soils tends to be in the lower areas,” says Shaw. “Those areas are where we used to get the big bushels and high returns from our crops, but over the past three years the yield data shows those areas are now producing the lowest yields on the farm. We realized that with very high land values in our area combined with high rental costs and inputs, there are substantial costs involved and all of the land needs to be producing at the highest level.”

Shaw partnered with a neighbouring potato grower to purchase an Ag Leader Tile Plow system in the winter of 2012. The initial investment for the plow, monitors and controls was about $50,000, with some additional investment in more GPS components, different boots and tile. “Our system is based on an RTK GPS system, which has been a major improvement over laser systems,” says Shaw. “The GPS program marks all of the tiles, so if we need to go in and make another connection or change something, we know where everything is.”

Unlike areas such as the Red River Valley in Manitoba where tile drainage is typically installed across an entire field in a grid system, Shaw has targeted specific areas in his fields. These tend to be low-lying areas that stay too wet much of the time. “We decided to start with some very wet areas after seeding in the spring of 2013 to get some tile in the ground and optimize the installation system,” explains Shaw. “We also had some fields in silage as well as some severely hail damaged fields, so we installed more tile during the summer and through to the end of November when the snow finally made us stop.”

Installation starts with taking the plow in survey mode across the area where the tile will run. At the end of the line, the plow is set on install mode and installs the tile along the survey line calculating the grade as it goes along. During installation, the plow always starts and moves from low ground to high ground. Shaw uses six-inch tile for the main line and four-inch for most of the rest of the tiling, installed about 36 to 40 inches deep. He also adds a fabric sock to help prevent the slots on the tile from plugging up in sandier soil. The four-inch tile costs $0.50 per foot and the sock adds $0.15 per foot, for a total of $0.65 per foot; costs for six-inch are slightly more. The plow does leave a small soil crown, which will naturally settle back in most soils, but in heavier clay soils, it may need to be smoothed down before seeding.

“The grade is one of the most important aspects, with a minimum of one foot in 1,000 or a .01 per cent grade,” explains Shaw. “The more grade the better, which is reflected in how quickly the water can be dissipated from the field. We were amazed to see that when we were installing the tile, by the time we got to the top of the field the water was already running out of the outlet. The system is gravity fed, which is why grade is so important.”

Shaw is very proactive in managing outflow, and makes sure the water runs out where it naturally flows so it isn’t negatively impacting anyone else. The water removed from the field has been filtered in the soil and is very good quality.

Shaw believes the payback on the tile drainage installation will be fairly fast. “We could see that underground tile drainage would be a substantial investment, but we could also see a number of positive returns including the ability to farm our fields corner to corner,” says Shaw. “We expect to be able to get into our fields in a more timely fashion, up to at least a week earlier in the spring than before. We should also be able to seed the entire field at once, rather than waiting for the low-lying areas to dry enough so we can get back in and seed. When we have to go around wet areas, seed and fertilizer inputs are often double, lodging issues are a problem, so we expect to see a multiplier effect with the inputs.”

Shaw has installed tile drainage on most of the land he owns and on some rented land. “We like to have rental agreements in place for at least four or five years, with some cost sharing of the tile and initial installation, which will pay back in terms of higher net returns. I think we are going to see a large amount of tile drainage installations in the corridor in central Alberta over the next few years. This area seems to be getting wetter over time and combined with high land prices, high rental costs and input costs, tiling has been a great investment on our farm.” 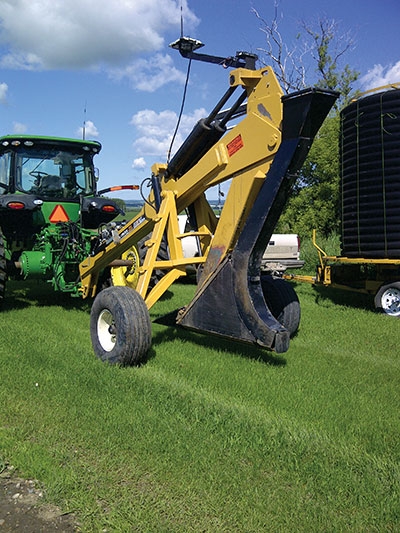 Shaw hopes to bring his saturated land back into production. Unusually wet conditions over the past few years in central Alberta have convinced some growers to add underground tile drainage to their cropping systems.