Weeds are responding to new herbicide-resistant crops and changing the dynamics for weed control. 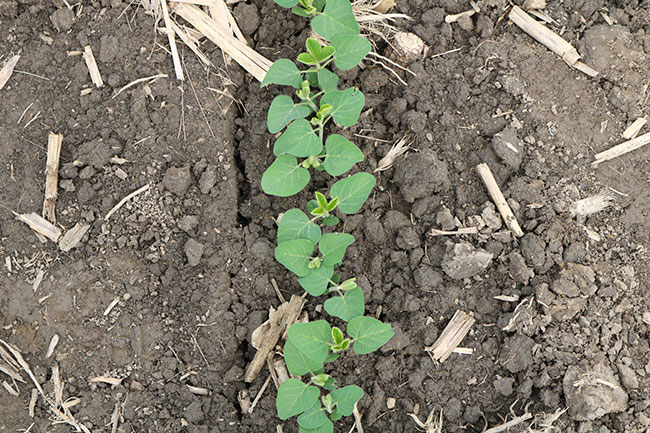 Wide-row soybeans in the rotation, with slow canopy closure, are highly vulnerable to weed competition before the canopy closes. Photos by Stephanie Gordon.

Working on the frontlines, Manitoba weed specialist Tammy Jones is seeing an increase in volunteer canola, kochia and other weeds. She is on the alert for outbreaks of new problems like Palmer amaranth, waterhemp and giant ragweed. Jones points to five actions a grower can take to stay ahead of the changing spectrum: crop rotation management, avoiding cosmetic spraying, using a two-pass system with residual, more scouting and preparation for hand-pulling new weeds.

“Farming is not just having a Plan A. It’s having a Plan B, Plan C, Plan D and pretty much a plan for every letter of the alphabet,” she says.

Jones sees a lot of three-year rotations, more two-year rotations and only a few four-year rotations. Her ideal is four years or more, and crop rotation is important to mitigate problems down the road.

Rotation choices affect weed competition, herbicide mixes and modes of action. For instance, wide-row soybeans in the rotation, with slow canopy closure, are highly vulnerable to competition before the canopy closes. “Maybe we can reduce that weed pressure a little if we look at row spacing. Or maybe we need to go back to something very old fashioned, like inter-row tillage or a cover crop or intercrop, so that the soybean crop is more competitive,” Jones suggests.

The two-year broadleaf-cereal pattern helps with rotating through different chemistries. But the system isn’t as flexible and comes with its own challenges when a curveball gets thrown. “Maybe you have dry soil conditions and herbicide carryover. Then you have to change cropping plans based on a factor outside your control,” Jones says. “Volunteer crops are harder to control in tight rotations, especially crops with herbicide tolerance traits.”

The typical three-year rotation in Manitoba now is soybeans-canola-wheat. “That rotation seems to work OK most of the time and you have decent weed control options,” she says. “Nobody wants to deal with canola volunteers in soybeans but it’s easier to control the soybean [volunteer] in canola. There are more herbicide options and it’s not as competitive as a canola volunteer. After canola, wheat tends to be a better option. Wheat gives the soil mycorrhizae a chance to recover and reorganize from the canola damage.”

The whole point of rotation is to build in resiliency. When Plan A goes wrong, you have backup.

The whole point of rotation is to build in resiliency. When Plan A goes wrong, you have backup. “If you’re using herbicide-tolerant crops as weed control tools, stagger them; don’t rely on the same tool. If your herbicide-tolerant soybeans have the Roundup-ready trait and the Xtend trait, then go with a Liberty Link canola,” she says.

“Keep the rotations of crops and chemicals diverse so that you’re continuing to change the patterns within your fields. When you’re constantly changing, weeds have a harder time adapting.” 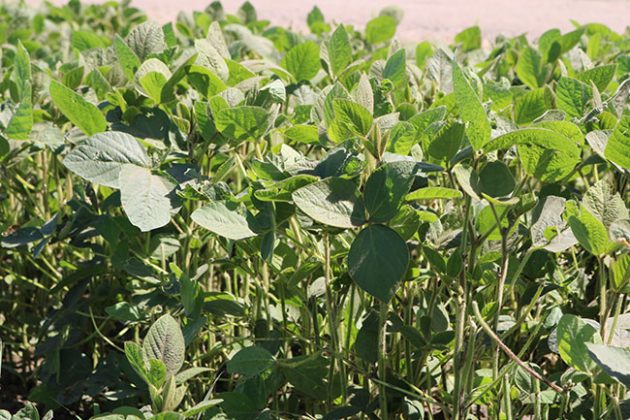 Not every weed is worth a field-wide application for protection. “I do like to see an economic reason to spray, not just a cosmetic one,” Jones starts. “Make sure you’re not doing revenge spraying because you feel it’s an eyesore and want to get rid of it.”

“Canola can be an eyesore in your soybeans but it’s probably not going to be at an economic control level, unless the population is more than three plants per square metre,” she says.

For that particular problem, Jones recommends fall harrowing in the canola stubble to get some early germination that reduces the population and seedbank. Charles Geddes, an Agriculture and Agri-Food Canada weed scientist working out of Lethbridge, Alta., proved that early autumn soil disturbance is very effective for managing volunteer canola in soybean production. When compared to zero tillage, it doubles the germination, and winterkill, of volunteer canola.

Herbicide layering, where one uses a two-pass system as the standard choice, including a residual herbicide in the first pass, is probably the best response to the new challenges in weed management. Herbicide layering this past spring was Jones’ own best approach in demonstration sites.

“Herbicide layering – where you have a pre-seed that has a soil residual – followed by an in-crop with different modes of action to hit that weed again – I found to be surprisingly effective this year.

“The old one-pass idea might not be the best way to get a nice, weed-free crop, especially in soybeans.”

“The old one-pass idea might not be the best way to get a nice, weed-free crop, especially in soybeans,” Jones says. “Consider the two-pass system and staging. If you don’t get weeds controlled with the first pass, you might be able to go back and control them with the second pass.”

“Make sure things are effective. Set yourself up for future success by being in the crop many times just for weeds. Of course, you can combine that with scouting for insects or disease,” she says.

When spraying and scouting have reached their limits, Jones says hand pulling is best for the worst-case scenario. “If you have a small patch of a bad weed, then hand-pulling it now is way easier than trying to figure out some magical chemical concoction three years from now when it has obliterated your crop.”

Wild oats are still the predominant weed problem in Manitoba, mainly due to increased resistance to Group 1 and Group 2 herbicides. However, volunteer canola and other herbicide-resistant weeds aren’t far behind the resistant wild oats. In his Manitoba research, weed scientist Charles Geddes focused on soybeans and new management options for volunteer canola. In Alberta, he switched focus to kochia.

“Herbicide resistance is by far the worst weed management problem we have in Western Canada,” Geddes says. What’s coming, he suggests, is a man-made weed management crisis. “In certain areas in the States, growers have had to revert to hand weeding. Weed resistance has grown to a level they can’t manage with crop rotations,” he says. “Diversity really is our best tool to manage resistance. Diversity in the crops we grow allows for diversity in the herbicide management program.”

The rise of herbicide-tolerant soybeans as a major crop on the eastern Prairies is a double-edged sword. These soybeans can be new tools in crop rotations for weed management, but they can also lead to producers sacrificing the diversity of the rotation. For twenty years or more, herbicide tolerant lines of canola have aided growers with weed control. Now that a second major crop with herbicide tolerance is here, it will put pressure on crop rotations.

“Anytime you see a shift in predominant production practices you’re going to see a shift in the weed communities,” Geddes says. “With herbicide-tolerant crops, especially, you’ll see an additional selection pressure on your weed community. It’s hard to predict exactly what is going to happen, but we know the weed spectrum will adapt.”

A canola-wheat-soybean rotation has been very profitable and widely adopted. It makes short-term economic sense, but Geddes offers a word of caution. “Including two crops with the same herbicide resistance (in a three-year rotation) doesn’t make that much sense. Already, volunteer canola is the number one weed in soybeans in Manitoba. It makes a lot more sense to try to switch off between your herbicide-resistant systems,” he says.

Worse, though, are back-to-back glyphosate resistant soybean crops that are grown in some areas of Manitoba. “That’s definitely an issue,” he says. “From discussions I’ve had, there are certain parts of Manitoba where growers focus on growing soybean crops continuously. They use glyphosate every year in crop as the
primary weed tool. I predict, this is where we will see new glyphosate-resistant weeds popping up in the near future.”

He continues, “Rotational planning plays a large role in managing volunteers. I suggest growing a canola-wheat-soybean sequence so you have a cereal break crop. Volunteer canola is fairly easily managed in cereal. Then you can have a low volume canola population going into the soybean year.”

A four-year rotation would be better, if heavy volunteer canola pressure is an issue. Canola seeds are not dormant at harvest, but they can go dormant and persist for three or four years. Up to four years after the canola, you can have a viable canola seedbank – and potential trouble – with the next soybean crop. 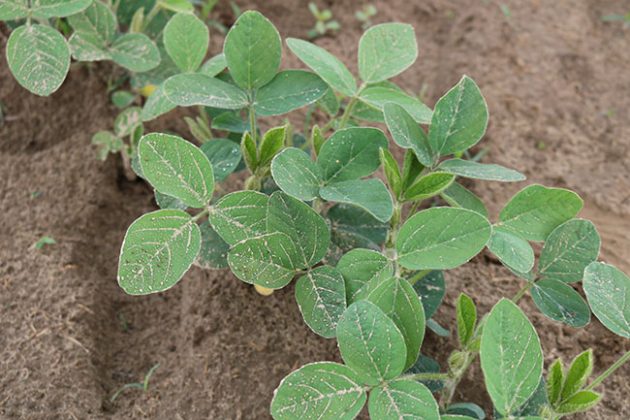 Wide-row soybeans in the rotation, with slow canopy closure, are highly vulnerable to weed competition before the canopy closes. Photo by Stephanie Gordon.

One of the most useful discoveries Geddes found was proof that selectively planting soybeans in low-nitrogen fields gives them a distinct advantage on weeds. “Soybeans can fix their own nitrogen. The predominant weed community cannot do that,” he says. “The lower the nitrogen, the more competitive the soybeans can be. In that situation, volunteer canola will not cause nearly as much yield loss.”

The takeaway is to seed soybeans in fields where nitrogen is already low or depleted by the previous crop.

The eastern Prairies are in the “infancy stage” of soybean production and Geddes believes the coming weed challenges will change production dynamics within a few years. Glyphosate-resistant kochia is one example. It was first found south of Lethbridge, Alta. in chemical-fallow fields. Then it showed up in crops. The Alberta population of glyphosate-resistant kochia was 50 per cent in 2017, up from only five per cent in 2012 – a notable increase.

Kochia was more abundant than ever in Manitoba in 2018. It was bad year, and quite a few resistance cases are suspected now, Geddes says. A new survey has been done, and the results, whether positive or negative, should not prevent producers from continuing weed management best practices.