Not that anyone would consider doing it, but planting F2 generation farm-saved seed from hybrid production will result in lost revenue compared to using hybrid seed. That’s the finding of an economic analysis of an agronomic study comparing the performance of hybrid, F2 and open-pollinated canola seed.

The agronomic portion of this study was completed in 2005, and published in the American Society of Agronomy’s Agronomy Journal in 2009. The research was led by George Clayton at Agriculture and Agri-Food Canada (AAFC) at Lacombe, Alberta, and was conducted at two sites in 2004 and four more sites in 2005 in Saskatchewan and Alberta. It compared Certified hybrid seed versus farm-saved F2 generation seed from hybrids, a Liberty Link hybrid against an open-pollinated variety, and a seeding rate of 120 versus 240 seeds per square metre. All seed was treated with Helix fungicide (Helix is not available to farmers).

The Agronomy Journal article reported, “Using farm-saved seed from hybrid canola (HY-FSS) compared with hybrid certified seed (HYC) reduced plant population density by 16 to 18 percent at the time of crop maturity and yield by an average of 12 percent, delayed maturity by two days, reduced seed oil content by 5 g/kg, and resulted in a small increase in incidence of green seed. Yield and quality loss associated with using HY-FSS could not be recovered by using increased seeding rates or by sizing seed and planting only large seed. The inability to use the most effective combined insecticide plus fungicide seed protectant treatments with farm-saved seed resulted in a 20 percent yield loss compared with treated certified hybrid seed.”

“The biggest benefit we saw with using Certified hybrid seed was increased emergence and stand establishment, earlier maturity and higher yield,” says AAFC researcher Neil Harker at Lacombe, who also worked on the research. “Seed quality effects such as seed weight, percent green seed and oil content were inconsistent among the treatments.” 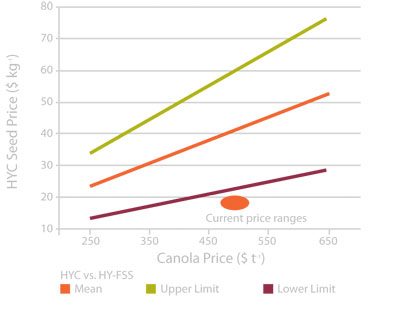 Crunching the numbers
The driving force behind the research was the high cost of hybrid seed relative to open-pollinated or farm-saved seed.

Hybrid seed costs four times more than F2 farm-saved hybrid seed, and two times as much as Certified open-pollinated seed. That tends to get people thinking. Elwin Smith, an AAFC bioeconomist recently ran the numbers on the agronomic research to see if net returns were also affected.

“Back when hybrids came on the scene, F2 generation yields looked better than what you were used to with open-pollinated crops. The thinking was that some loss in yield with F2 seed would be acceptable because of the much lower seed cost,” explains Smith.

In fact, the economic return of hybrid seed was much superior to that of F2 seed, and on average, seed costs could be much higher and still provide a profitable return over F2 seed.

“The price of hybrid seed isn’t anywhere close to where you would want to use F2 seed,” says Smith.

“You are likely losing about $57 per acre by using F2 versus hybrid seed,” says Smith. “The yield benefits of hybrid canola more than offset the additional seed cost. The benefits are more pronounced when seed treatment limitations are considered. You wouldn’t want to consider F2 seed, even if it was legal.” 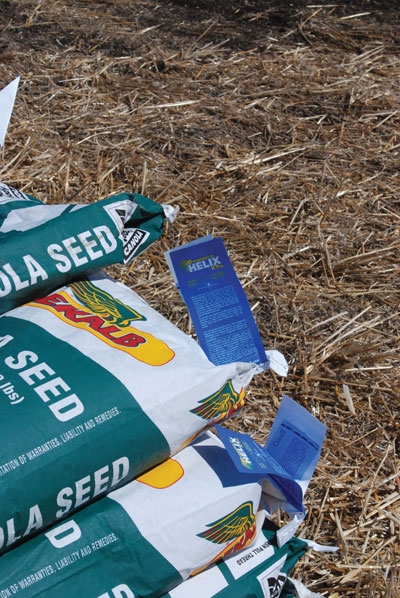