Features
The state of succession 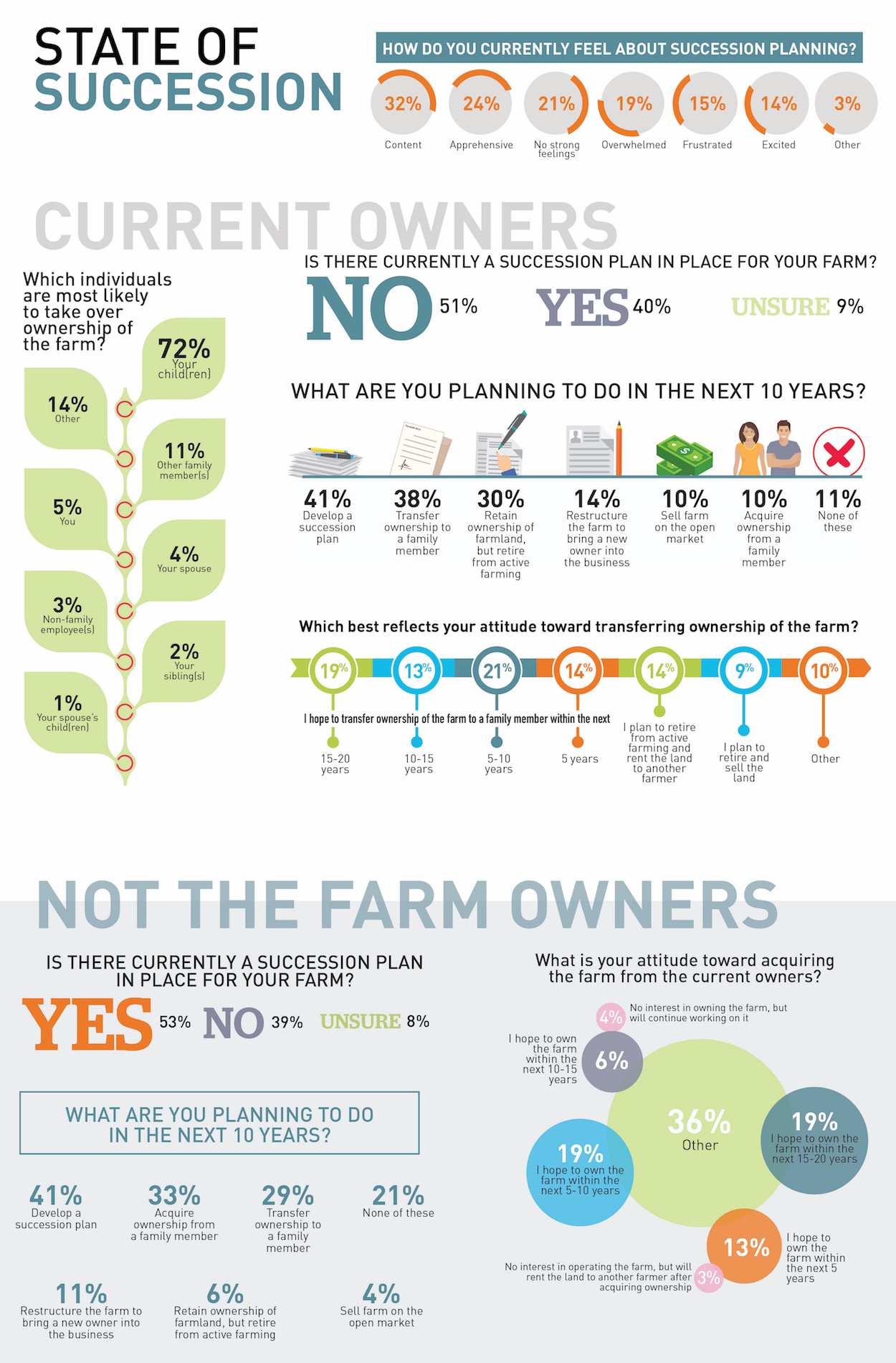 Succession, or transition, planning is a topic that is always present in agriculture – but quite often, the formal transition plans are not.
In 2016, Statistics Canada’s Census of Agriculture revealed that only one in 12 operations have a formal succession plan outlining how the farm will be transferred to the next generation. In other words, as previous editor Brandi Cowen wrote during our inaugural succession planning week in 2017, “the vast majority of Canada’s farm operators have not taken steps to safeguard the businesses they’ve worked long and hard to build.”

The Census of Agriculture is conducted every five years, so only time will tell if formal succession plans will be more abundant in 2021. Until then, the Ag Succession Survey offers a glimpse into the state of succession in the meantime.

Similar to the 2016 Census of Agriculture, a majority – 51 per cent – of survey respondents who identified themselves as the current owner said they do not have a succession plan in place. The gap is minimal, however, as 40 per cent of current owners do have a plan in place.
Advertisement

Other current owners have plans to transfer ownership to a family member (38 per cent), retain ownership of the farm but retire from active farming (30 per cent), or restructure the farm to bring a new owner into the business (14 per cent). To a lesser extent, 10 per cent of current owners plan to sell their farm on the open market in the next 10 years.

When it comes to which individuals are most likely to take over ownership of the farm, 72 per cent of respondents said their children will most likely assume ownership. The second highest result was the ambiguous “Other” category, with 14 per cent of survey respondents indicating that someone other than other their spouse, siblings, other family members, or non-family employees will assume ownership of the farm. A closer look at “Other” responses revealed that these include neighbours, current renters, outside buyers, or a corporate partnership. Thus, for 14 per cent of current owners, the farm is not likely to remain under family ownership.

A select few responses show the farm will not remain a farm at all, instead being sold to developers or put into subdivision (Ontario). Other current owners selected “Other” only to write they are unsure who will assume ownership; a response that could be a byproduct of not having a formalized transition plan in place.

Most (67 per cent) current owners hope to transfer ownership of the farm to a family member within the next five to 20 years, with the next five to 10 years being the most popular option. A smaller group (14 per cent) of current owners plan to retire from active farming and rent the land to another farmer. Even fewer owners, only nine per cent, plan to retire and sell the land.

For 10 per cent of owners that selected “Other,” the responses are more varied. Some owners said they will “retain ownership until death” or have longer timelines, hoping to transfer ownership in the next 20 to 25 years. A few of the responses stated they were unsure, revealing for some owners, transition plans are still up in the air. Some owners said they would rent the land to another farmer, but the ownership of the land would transfer to their children. Other responses revealed a more fluid ownership structure, such as farms under corporation ownership or family trusts, or transferring farm assets into trusts instead of the entire farm.