Features Agronomy Fertility and Nutrients
The rotational boost from peas, lupins and fababeans

Field peas wins out over  fababeans and lupins for rotational benefits, but all three pulse crops provide irreplaceable benefits to cropping rotations. 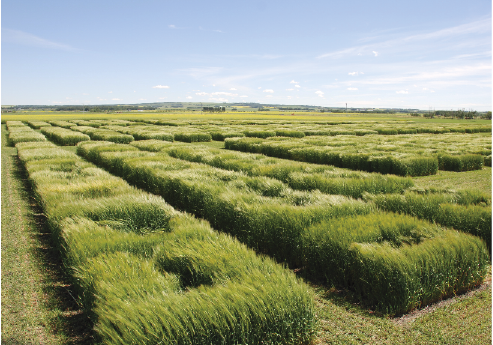 The improved performance of crops grown on pulse stubble is often attributed to the increased soil nitrogen content left behind by the pulse. But Alberta researchers are finding that the non-nitrogen benefits of pulses may play an even more important role.

The researchers are conducting a field study to compare the benefits of field peas, zero-tannin fababeans and narrow-leafed lupins for the following wheat crop, and to investigate residue decomposition for the three pulses. Field peas is the usual pulse crop grown in Alberta’s Parkland region, while fababeans and lupins are fairly new pulse crops for the region.

“Our long-term goal is to be able to provide recommendations to farmers on how to manage their pulse crops to optimize the productivity of their whole cropping system,” says Sheri Strydhorst, a PhD student at the University of Alberta. This goal requires that the researchers not only determine the rotational benefits of the different pulses but also understand how the benefits occur.

The study began in 2004, when the researchers seeded the three pulses and barley as a check at Barrhead, Lacombe and Devon, all in Alberta’s Parkland region. No nitrogen was applied to any of the plots. At harvest, the above-ground residues were removed to simulate straw baling. Then in the spring of 2005, the stubble was seeded to Hard Red Spring Wheat and fertilized with phosphorus, potassium and
sulphur to meet the crops’ needs; no nitrogen was applied to the wheat.

To assess residue decomposition, the researchers conducted a field experiment at Barrhead. In the fall of 2004, they placed above-ground crop residues from each of the three pulses and from the pulses plus barley (to simulate weedy pulse crops) in mesh bags. The bags were placed on the soil surface (to simulate no-till) or buried at five centimetre depth (to simulate conventional till). The researchers
collected the bags during a 22 month period from September 2004 to July 2006.

For all the residues, including the barley residues, the carbon and nitrogen contents declined rapidly during the winter of 2004 and then remained fairly stable, with a carbon to nitrogen ratio of about 11:1 for the rest of the study. Carbon:nitrogen ratios below 20:1 indicate that nitrogen is being mineralized. So from April 2005 onwards, nitrogen was being converted into plant available forms no matter what the residue type. There did not appear to be accelerated nitrogen mineralization of the pulse residues.

Strydhorst says, “Our results suggest that yield increases in cereal crops grown on pulse stubble may not be primarily due to the decomposition rate and nitrogen mineralization rate of the pulse crop residues.”

She adds, “Pulse crops do increase soil nitrogen levels for the subsequent crop, but that’s only a small part of the picture. They are very effective at fixing their own nitrogen, but most of the rotational benefits from pulse crops are thought to be from non-nitrogen benefits, including reduced pest problems, increased nutrient availability and improved soil structure.” (See Understanding non-nitrogen benefits.)

Strydhorst and her colleagues have looked at this question from several angles. One part of the answer is probably that less of the nitrogen fixed by field peas goes into its seed in comparison to fababeans and lupins. Since the seeds are removed from the field at harvest, more nitrogen is exported off the field with the higher protein fababean and lupin seeds.

Un-decomposed lupin residues had the highest percent nitrogen of the three pulses, yet the wheat yields on lupin stubble were lower than for pea stubble. Strydhorst thinks that is likely because the lupin residues decomposed so quickly. As a result, a significant amount of the nitrogen was probably being mineralized (converted into a plant available form) in the fall and early spring, when there was no crop to use the nitrogen. That form of nitrogen is easily lost from the soil nitrogen system, so spring seeded crops would not be able to capture the full benefits of the nitrogen from lupin residues.

Changes in soil microbe populations might be another part of the answer. Strydhorst notes, “In some European studies, field pea soil contained more soil microbes after pea residues were incorporated, so we thought that might be a possible reason. But in our soil samples, there weren’t more soil microbes under the pea stubble compared to fababean or lupin or barley.” Other studies in Saskatchewan and Alberta also did not find any significant differences in the number of soil microbes in different rotations.

Strydhorst speculates that perhaps the soil microbes in her study were not nitrogen-limited, so the microbes were not waiting for that input of nitrogen from the pulse residues to allow an increase in their activity, or perhaps changes in the microbial population were not completely captured by the study’s sampling scheme.

The researchers are now examining the differences in the types of soil microbes in their samples to see if that might help explain the differing benefits of the three pulse crops.

Yet another angle investigated by the researchers was whether the various soil nitrogen pools – dissolved organic nitrogen, nitrate and ammonium – were different under the different crop rotations. They found that nitrogen pool differences did not account for the differences in nitrogen uptake by the wheat crop, but that finding may be because changes in the soil nitrogen pools might be apparent only over the long-term.
This research study has been funded by the Alberta Crop Industry Development Fund, Alberta Pulse Growers, Alberta Agriculture and Food, Agriculture and Agri-Food Canada, Natural Sciences and Engineering Research Council of Canada, and Alberta Ingenuity. The researchers hope to continue their efforts in 2008 to get a better handle on the dynamic interactions of such factors as pulse type, soil microbe communities and nitrogen form. They would also like to quantify the economic value of pulse crops to local/regional cropping systems.

Strydhorst says, “This research helps farmers to consider a systems approach to growing crops. If we can understand the rotational benefits, then producers can adjust their inputs accordingly to grow high yielding, high protein crops. For instance, if producers are planning to grow wheat on both fababean and pea stubble, they should not be treating those two fields the same. The long-term goal of our research is to be able to tell a producer what you need to do for faba stubble and for pea stubble to optimize production.”

She concludes, “This research really highlights the importance of diversifying our crop rotations. In 2006, I think 28 percent of the Alberta cropland was seeded to wheat, 29 percent to other cereals, 16 percent to canola and only three percent to pulse crops. If producers were to change their crop rotations so they had one pulse crop grown every five years in their cropping cycle, then 20 percent of our acres wouldn’t require nitrogen fertilizer in the pulse crop year, and we’d have reduced nitrogen fertilizer requirements in the subsequent crop year, not to mention possibly reduced herbicide and pesticide costs. With these benefits in addition to improvements in soil structure and other nutrient availability, I think there is tremendous possibility for reducing input costs and improving the health of our agro-ecosystems by including more pulse crops in our rotations.”

Strydhorst talks about some of the theories to explain how pulse crops produce these benefits. “One theory is based on the fact that the rhizobia bacteria that fix nitrogen in pulse crops have been found colonizing the roots of the following non-legume crop. We don’t believe that the improved yield of the non-legume crop is associated with nitrogen fixation, but rather somehow the bacteria are stimulating plant growth, improving resistance to environmental stresses and increasing disease resistance.”

Another possibility is that the pulse crop creates a better environment for beneficial soil microbes.

Strydhorst explains, “When a pulse crop is fixing nitrogen, a byproduct of the process is hydrogen gas. This can account for 33 percent of the energy demands of the nitrogen fixation process. This hydrogen
gas, as far as we can tell, is not a useful byproduct for the pulse plant; it’s simply released into the soil. But it seems to enhance the growth of hydrogen-oxidizing soil micro-organisms, so you may get a little shift in the microbial community structure. And the hypothesis is that this may influence plant growth by providing more plant available nutrients, increasing the uptake of mineral nutrients and protecting against plant diseases.”

With respect to nutrient availability, she says, “Lupins are well known for their ability to mobilize soil-bound phosphorus. They exude different chemicals through their roots which solubilize different types of the phosphorus in the soil that aren’t typically available to plants.” Scientists believe this has a carryover effect, so there may be more phosphorus available for the next crop.

Strydhorst continues, “In terms of improved soil structure, legumes tend to increase the soil organic
matter, which results in reduced soil bulk density and improves the water-stable aggregates. The taproot of the lupin is sometimes called a ‘biological plough’. It reduces soil compaction, which improves soil structure for subsequent crops.”

She notes, “The break in weed, disease and insect pest cycles is not specific to pulse crops. But when you have, for example, a fababean crop in the rotation that a wheat fungus isn’t able to colonize, you get that break in the disease cycle.

So, with a varied crop rotation you can reduce insect, weed and disease problems.” n