Features Agronomy Cereals
The road ahead for the wheat industry

Now that the wheat industry has achieved something of parity with corn and
soybeans, growers and industry stakeholders are taking stock of wheat's opportunities.
For the most part, they like what they see.

Keeping in mind differing needs and outlooks across the industry, wheat has
shown a tremendous upside, in spite of concerns over tightening world supply.
According to managers with C&M Seeds near Palmerston, Ontario, wheat has the
potential to be the most profitable crop, without any premium markets. "If
you go back to September and October of 2006, wheat was a massive premium over
corn and in essence, the market was doing its job to get it planted into the
ground," explains Dana Omland, grain merchandising manager at C&M Seeds
and Palmerston Grain. "Once the winter wheat was planted, corn started
rallying, so that by the time you got into that January/February zone, the price
spread was very low between them. But since then, wheat prices have exploded."

In fact, discounting the fusarium outbreak of 1996 and its impact on price,
Omland says the pricing seen in June 2007 is the highest US dollar price for
wheat in history. As for where that leads the industry, Omland believes there
is a wealth of opportunity, from new streams of functionality here in Ontario
and the US to overseas exports, which are set to grow at a phenomenal pace.
With a shifting economy in China and India, more wheat is being purchased to
feed a growing middle income sector, a new phenomenon among more than a third
of the worldÕs population.

The only challenge in 2007 is the short wheat crop planted in 2006; that will
negate most exports in favour of filling domestic demand as well as with premium
US customers. "The other thing that a lot of people miss is that Ontario
really does have a comparative advantage in wheat versus the nearby US base,"
he says. "Our yield per acre is higher, even though theirs is higher in
corn."

And estimates from FC Stone indicate corn acres should remain high short-term,
but not at the expense of wheat acres. Provided the wheat industry in Ontario
continues to build consistency and quality, the end user will place a value
in those properties and continue buying Ontario product.

Market always wins
Talk of high prices and the potential for premium markets sounds good, but the
fact remains, wheat is still a commodity.

According to Todd Ross from Parrish and Heimbecker in Mississauga, premium
markets in a time of high prices are less attractive, as has been the case in
the past with the soybean trade. A premium of $1.00 per bushel means less when
soybeans are $9.00 compared to just $5.00 or $6.00. Added to that is the current
mind-set of processors; world stocks may be tight and prices high, but North
America's wheat processors and millers operate on a model of consistency and
low price.

"For instance, a large scale baker doesn't want to do anything special;
they want the same thing, minute after minute, hour after hour, day after day,
365 days of the year," says Ross. "Overall, that's the way North America
and the world is set up for low cost of production."

Of course there are niche market opportunities for specialized milling and
baking, as well as the organic market. But they are all small endeavours. "Based
on those facts, wheat's going to continue to lose ground, worldwide, and you
have to look at how the industry is structured to see it," says Ross. Part
of the question is who will pay the premium and can that premium be passed on
to the next level in the food chain. If a processor pays a premium to the grower,
it has to be guaranteed a corresponding boost for their operation. "You
might take the value of 'corn flakes' as a percent but bring that back to the
farmer and maybe it's only five cents, and that's the problem with a lot of
these things."

From his perspective, Ross does see a positive swing resulting from changes
in the US food pyramid and its zealous uptake among consumers. "We saw
whole wheat flour go from very small percentages, roughly five percent five
years ago, and a recent statistic saying it's up to 20 percent capacity in the
US," he relates, adding that he is skeptical about such a dramatic increase.
"But it will have a big effect on what's grown." 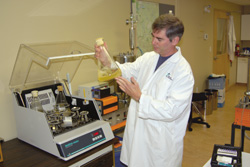 Keep in mind, this is food
In a time when opportunities are being measured against rising energy costs,
concerns over food safety and the impact of a stronger Canadian dollar, Judy
Seyler from the Ontario Ministry of Food, Agriculture and Rural Affairs points
out that it is happening with every commodity or item, not just in wheat. However,
she also emphasizes that conditions have a different impact on food products.

Seyler is the bakery and cereal sector officer with OMAFRA's Business Development
Branch and notes consumer expectations are higher and demands for newer foods
and taste sensations are changing. "If you look at what is currently available
as consumer products, for example the growth in whole grains, the consumer is
looking for products they view as healthier because we want to live longer,
healthier lives," says Seyler.

That, and finding the right recipe for a product to answer that demand, is
a tremendous challenge for food processors and manufacturers. "Consumers
are becoming better educated and they're looking for products that make them
feel better about what they eat."

The impact on the industry is slow but visible in many ways. Seyler cites the
new Kellogg's plant in Belleville, Ontario, as an example of better opportunities
for the future. "That was very well researched, with them asking, 'Where
do we want to be positioned to supply our North American mandate?, where can
we get inputs?, where is the infrastructure?'", she says. "Obviously,
Ontario has a lot of traction because of our inputs, and we're working with
a couple of other out-of-province companies that are looking for sites right
now, and in a couple of different sectors of the baking industry."

She also praises the establishment of the Ontario Cereals Research Council
as a positive step towards building better access to information between growers
and end users as to their respective needs. As for the current pricing boom
and tightening world supply, Seyler believes Ontario's reputation for high quality
wheat and its specific classes will place it in good standing, even if exports
fall below previous years' levels.

"Regardless of who the customer is, if it's a Westons or a Kraft or a
small specialty facility, their key need is to be able to secure their inputs,"
states Seyler. "If they can't get them from Ontario, they have to get them
from somewhere else. Having said that, I think the reason they're here in Ontario
is because we have good product, so over the long-term, as long as they can
get what they need, companies will continue to source inputs from Ontario."