How (in)sensitive to fungicides have Prairie pathogens become? 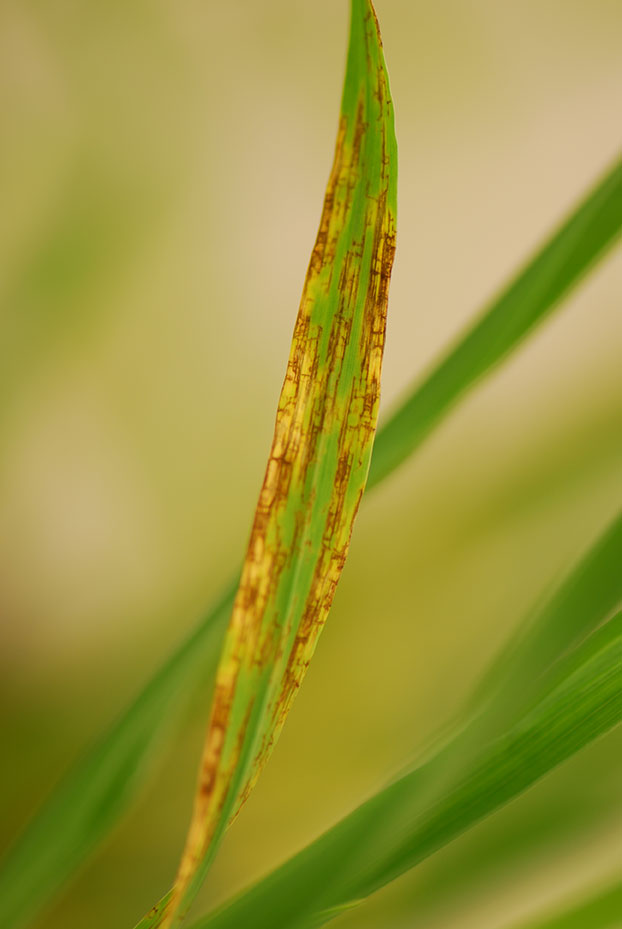 For years, Ascochyta blight in chickpea has served as the textbook example of “fungicide insensitivity.” But recently, the Prairie pathogen world has become more inclusive, with fungicide-resistant populations being detected in other crops, such as lentils, barley and peas.

Randy Kutcher, professor in the plant sciences department at the University of Saskatchewan, identifies a number of factors contributing to the rising risk and incidence of fungicide insensitivity. “A number of years with above-average precipitation resulted in high disease severity that impacted growers, and fungicides were very effective in those years. One of the greatest factors favouring fungicide use, and therefore increased risk of insensitivity, is the intensification of cropping systems, including two-year rotations such as canola-wheat or lentil-durum, large field sizes, and high yield expectations. These factors allow pathogen inoculum to build up quickly and spread easily. In wheat, the arrival of Fusarium head blight has greatly increased the amount of fungicide used in this crop,” he says.

The most recent pathogen to make the fungicide insensitive list is Colletotrichum lentis, the cause of anthracnose in lentils.  In 2019, Group 11 insensitive C. lentis was confirmed in multiple lentil fields in Saskatchewan. According to Sherrilyn Phelps, agronomy manager with Saskatchewan Pulse Growers, this discovery was somewhat surprising to growers and industry representatives.

“We were all caught off guard with the level of insensitivity identified in these fields, but in some ways, it was not surprising as the fields were sampled very late in the season after fungicide applications had attempted to control the disease. However, it was likely a matter of time before this insensitivity happened, as there has been heavy use of G11 fungicides in lentil-producing areas for many years. Since G11s are very widely used in fungicide formulations and are often combined with other active ingredients in products, the management of these insensitive populations is now much more of a challenge,” she says.

With the increased fungicide use on the Prairies, researchers have recognized the need to evaluate where our pathogen populations are at, and have established a sensitivity “baseline” in some key pathogens.

“Understanding baseline sensitivity is important so that researchers and industry know the typical level of variation among isolates of a particular pathogen for a particular active ingredient. Then, if growers suspect that the fungicides they are using are not as effective as in the past, or in situations where they believe there has been a rapid change, such as from one year to the next, it will be possible to test isolates from those fields and compare them to what we have found to be ‘normal’ variation in these baseline studies,” Kutcher says.

Fungicide sensitivity research has recently wrapped up in Kutcher’s lab, with favourable results. Three graduate students have provided valuable baseline sensitivity research on pathogens causing common diseases targeted by fungicide applications in Western Canada:  Fusarium head blight in wheat (by Gursahib Singh), tan spot in wheat (by Dustin MacLean), and pasmo in flax (by Tonima Islam). The good news? No insensitivity was detected in any of these pathogens for the fungicides tested.

But not all baseline sensitivity tests have had such a happy ending. In his PhD research, Alireza Akhavan, now the provincial plant disease specialist for the Saskatchewan Ministry of Agriculture, discovered fungicide insensitive isolates of Pyrenophora teres, the cause of net blotch in barley. Insensitivity to propiconazole (G3) was detected in two isolates of the pathogen that causes the net form of net blotch, and pyraclostrobin (G11) insensitivity was found in one spot form net blotch isolate.

“The net blotch pathogen population is genetically diverse, producing both the sexual and asexual stages, and is frequently exposed to these site-specific fungicides which pose a high risk for the selection of insensitivity. If the pathogen develops increased insensitivity, then with many asexual cycles during the following growing season, the insensitive individuals may multiply and form a significant portion of a new emerging population,” Akhavan explains.

According to Kelly Turkington, research scientist at Agriculture and Agri-Food Canada in Lacombe, net blotch insensitivity has not yet been observed in the field, which typically occurs after significant shifts in sensitivity of the pathogen population. However, the identification of these particular insensitive isolates is certainly something to take note of.

“The G3 and G11 insensitive net blotch isolates highlights the importance for farmers and industry to adopt integrated disease management strategies to avoid fungicide failure. Moreover, it emphasizes the critical need to continually monitor barley leaf disease pathogens for shifts in fungicide sensitivity and to encourage responsible stewardship of fungicides by farmers as well as the agrochemical and farm supply industries,” he says.

Turkington also advises caution to the practice of using single active fungicides at herbicide timing, which could play a key role in selecting for insensitive populations. “We completed fungicide timing research on barley leaf spots in the late 1990s and more recently from 2010-2012. Our findings clearly showed fungicides applied at the herbicide time were of limited benefit in terms of disease control, and as a consequence, producers would have to go in later at the flag leaf to anthesis stages to apply fungicide again to protect the key upper canopy leaves.  This meant that barley fungicides were being used twice during the growing season, often with a single active ingredient, thereby increasing the selection pressure on the pathogen population,” he explains.

Fungicide insensitivity is influenced by the fungicide itself (i.e. the mode of action), the pathogen and its biology, as well as the agronomic factors imposed on the crop, including the environment. While a grower can’t control the weather, one can choose agronomic practices that best help manage disease development, and minimize the selection of fungicide insensitive isolates in the natural population.

Turkington suggests looking at the fungicide use history on the farm and taking note of the particular active ingredients that were used, much like one does when evaluating herbicide mode of action use for managing weed resistance. If the fungicide groups have stayed the same for a number of years and the products used are single actives, it’s time to switch to fungicides with more than one mode of action.

Phelps adds that it is best to have more than one effective active ingredient targeting the specific pathogen to reduce the risk of developing insensitivity, and to rotate between different modes of action to reduce development of multiple resistance. She also advocates learning which pathogen each active ingredient controls. “Just because there are two or more active ingredients in a product, it doesn’t mean they all provide control of the same disease(s),” she explains.

Fungicides should also not be relied on as the only method of controlling plant diseases.  “Look at your crop rotation and the varieties being grown, as tight rotations and susceptible varieties will mean increased dependence on fungicides as the sole management tool. Limit your fungicide use to situations where there is economic benefit. If weather conditions are not conducive to disease, and/or adequate rotations and less susceptible varieties are being used, then a fungicide application will be of limited to no benefit,” Turkington advises.