The end of the Canadian Wheat Board’s monopoly in August 2012 ushered in what has been called a new era in grain marketing. Perspectives on the first few months of this new era suggest the transition has gone fairly smoothly so far for many grain growers.

“What I’m finding with the farmers I talk to is that some are quite happy with the changes, some are disappointed with how the changes came about more than that the changes did come about, and then the majority are in the middle ground,” says Neil Blue, a market specialist with Alberta Agriculture and Rural Development (AARD). “They are just doing their best to learn about the pros and cons of the new system and understand the contracts that the grain companies are offering and all the different alternatives that the Canadian Wheat Board [which is now called CWB] is offering.”

He adds that most farmers are taking a wait-and-see approach, realizing that a few months is too short a time frame to make a definite determination as to whether the change has been a good thing or not.

According to Doug Chorney, president of Keystone Agricultural Producers in Manitoba, that province’s producers were already very experienced at marketing their own canola, oats, soybeans and pulse crops, so there has not been much difficulty to adapt to marketing their own wheat and barley. “For Manitoba farmers it has been a banner year for both winter wheat and spring wheat production; the quality was good and the yields were good,” he says. “We’ve also had record-setting commodity prices, so most people feel they’re doing a great job selling all their grain at a price they’ve never seen before. Whether they are or not may remain to be seen, but to producers it seems like everything is going fine.”

Richard Phillips, executive director of the Grain Growers of Canada, says there are almost zero complaints from the farming community about the change. “I think it has been a fortuitous change in the way the timing worked out. We’ve had really good grain prices, so producers have the opportunity to sell both crop for this year and crop for next year at very good prices.”

The drought in the United States has been an important part of the whole picture this fall. “Because of the shortage of grain in the States, American buyers are driving up into Canadian farmers’ yards to buy grain right out of their farmyards,” notes Phillips. “There has been a big sucking sound south of the border pulling Canadian wheat down. That won’t happen every year of course, but in the drought they have been very aggressive.”

He adds that the Grain Growers and the Canada Grains Council have worked closely with US farm groups to create a website with information for Canadian and US farmers interested in selling their grain across the border (canada-usgrainandseedtrade.info).

Chorney says that market conditions in the fall worked well for farmers who wanted to move their wheat crop early. “Wheat moved very rapidly last fall; I’m told that even surprised some people in the grain trade – they didn’t expect to see such a high volume of wheat move that early,” he notes. “My guess is that might be more related to the specific production issues this year more than to the fact that we had marketing freedom.”

University of Manitoba agricultural economist Dr. Derek Brewin says it’s been a good year for wheat so far because of the good prices and good crop quality, but he hasn’t seen a major difference in the flow of Prairie grain into new opportunities due to marketing freedom. “There could be opportunities for farmers close to the US border – and in the long run there might be some opportunities linked to new wheat varieties or something like that,” he notes. “But overall it doesn’t look like the market channels have changed very much so far. We’ll see what CWB reports for their tonnes in different pools, but it looks like they are still managing quite a lot of sales.”

With the open market, growers have a lot of possible choices for their wheat and barley, from selling to CWB, grain companies, directly to end-users or through futures contracts. ICE Futures Canada’s futures contracts for milling wheat, durum and barley were launched in January 2012. “I’m surprised at how small a role the new ICE Futures Canada contracts are playing,” says Brewin. “They didn’t seem to take off, even though they are designed quite a lot like canola, which is a functioning futures market.”

Brad Vannan, president and chief operating officer of ICE Futures Canada, attributes the low volumes in those new futures contracts to several factors. One factor is the unusual set of circumstances in the North American wheat market in the fall of 2012. “The market is seeing very high feed grain prices, which sets a high floor price for wheat,” he notes. “At the same time, the [milling] wheat crop [in Canada and the US] is generally good quality and it’s reasonably abundant, which creates a low ceiling. With a high floor and a low ceiling, trading values are confined to a relatively narrow band.

“As well, the contracts were designed to identify the uniqueness of the Canadian market that can occur, but doesn’t always occur,” he adds. “This just happens to be one of those years when Canadian wheat is not all that different in quality from US wheat, so the US markets and the Canadian markets are all trading in pretty good correlation.”

“The good wheat crop and good prices didn’t really accentuate a high degree of risk in the market,” he says. “Futures markets are used to manage risk. When there’s not a strong perception of risk, you see less demand for mechanisms that help manage risk.” He thinks this also might have reduced demand for other risk management options such as pooling.

Another important factor is that new futures contracts take time to get established. “We are willing to be patient with these contracts, and allow them ample opportunity to find a place in the market.” Vannan adds the contracts have already achieved some important milestones, such as deliveries of barley and spring wheat, indicating that the mechanisms behind the contracts are functioning properly. Also, ICE Futures Canada met with the users of the contracts to see if perhaps the contracts needed some changes, and they found that, overall, the users were confident in the structure of the contracts.

CWB in the transition
Phillips credits CWB for playing a key part in smoothing the transition into the new era. “I give a lot of kudos to Ian White [CWB president and CEO] and his management team. They have done a stellar job of managing through the transition, and I have sold my wheat through the CWB this year.”

Phillips and Blue have both been interested to see the different alternatives CWB has been offering to attract producers, like the recently announced Winter Pool and Futures Choice Winter Pool.

Brewin notes, “One of the things I thought was interesting was CWB’s pool return outlooks still have quite a spread of prices for different quality levels. You don’t see that much detail in contracts for wheat in the United States. I think CWB’s leadership on quality and showing the pool return outlooks on quality probably calmed the whole market down in terms of what they were going to do regarding quality.”

One concern during the first few months of the transition has been some reports that some grain handlers have not been willing to handle CWB grain. “CWB has the disadvantage of not having any facilities, so they are reliant on contracts with grain companies for acceptance and handling of their grains,” says Blue. “There seems to be some variation in how the grain companies are dealing with CWB. Some do not want to co-operate with it, and others are doing just fine in dealing with it. With the decrease in the number of accepting points for grain in the last 20 years, some farmers may have less flexibility in where they can do business, so they may have to haul further if the local grain company is not co-operating well with CWB.”

Phillips notes, “Not all the elevator companies came on board as willingly or as quickly as some of the other ones did, and sometimes it was not so much a company as an elevator manager. However, I think they are coming around because they realize that if they are getting paid to handle grain, then there’s still revenue. So I think there were some growing pains along the way.”

A few months is not enough time to evaluate the long-term effects of the new marketing era for farmers. That will require much more time – plus detailed analysis of the whole system.

“I think there are still a lot of factors in the marketing of wheat and barley that producers are learning about,” says Chorney. “I also think there will be new opportunities for identity-preserved production that producers will likely benefit from.” 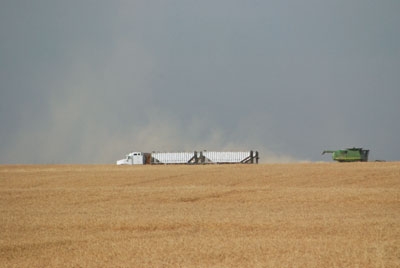 Wheat moved rapidly off the field and into markets The end of the Canadian Wheat Board’s monopoly in August 2012 ushered in what has been called a new era in grain marketing.