Features Pulses
The mystery of the chickpea health issue 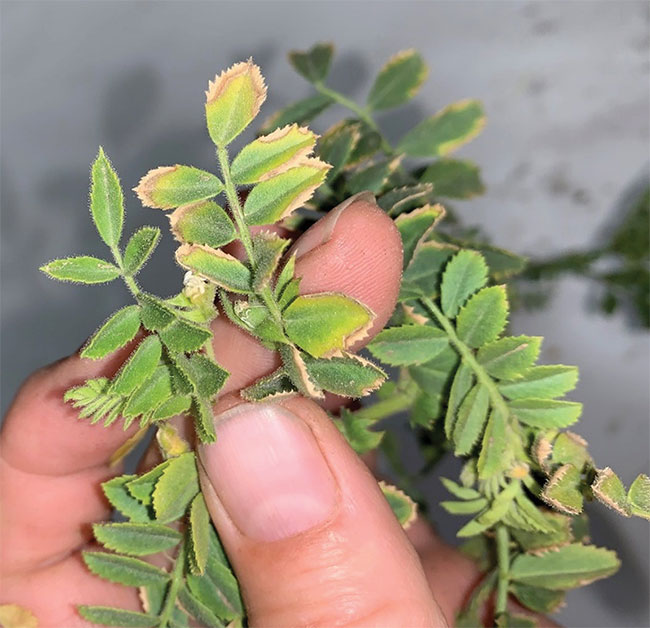 It’s a riddle wrapped in a mystery inside an enigma, as Winston Churchill once famously said. The same phrase could be used to describe an emerging health issue in chickpea that was first noticed in 2019 and was more widespread in 2020.

“There are some well-known health issues in chickpea in Saskatchewan, such as Ascochyta blight, insensitivity to Group 11 fungicides, and delayed maturity because of the indeterminate nature of growth. None of these issues appear to be the primary cause of the emerging chickpea health issue,” says Michelle Hubbard, plant pathologist with Agriculture and Agri-Food Canada in Swift Current, Sask.

Gravelbourg, Assiniboia and Coronach were the worst-hit areas in 2019. These areas were dry early in the season and wet later on. Early symptoms showed leaf tip chlorosis, and edges could also be chlorotic. There were varying levels of white spotting on the leaves that could have been surfactant burn. Secondary growth in the leaf axils on the main branch could also be wilted and chlorotic.

There was discolouration with purpling or browning of the leaves, combined with whitening or death of the leaves. Entire branches or the entire plant could dry up and die.

Adding to the puzzle, some affected plants had rotted roots but others had healthy roots. There were also reports of nodules being affected.

Hubbard says in 2019, the symptoms were often widespread in a field, while in 2020 some fields had patchy areas in low spots, compacted areas, knolls and rocky areas. Some fields, however, were completely wiped out.

Initially in 2019, CDC Orion chickpea seemed to be hit much worse than CDC Leader. That year, the samples were collected fairly late in the summer, resulting in all samples having high levels of Ascochyta blight that were insensitive to the Group 11 strobilurins.

“In 2019, we came up with the idea that, assuming Ascochyta blight was playing a significant role in the damage, that maybe the genetic resistance in CDC Orion had been overcome,” Hubbard says. “We found no significant difference on how CDC Orion and CDC Leader responded to Ascochyta blight in growth chamber tests.”

Another suspected cause in 2019 was damage from residual herbicides, like Group 14 saflufenacil (Heat). However, no clear symptoms of herbicide damage, such as mottled chlorosis or necrosis, were observed. And some affected fields had never seen a Group 14 herbicide.

More extensive sampling was conducted in 2020 on behalf of Saskatchewan Pulse Growers around flowering to early podding, and analysis was conducted for herbicide residues, nutrient levels, and foliar and root pathogens. Root and leaf samples were collected from 16 fields with one to three samples collected in each field. Eight fields had both healthy and unhealthy areas, which were sampled separately for analysis. Agronomic practices were also collected.

The most severely affected areas in 2020 were in the same general area as 2019, but mild symptoms were also observed in the Swift Current area. In the survey, the percentage of field impacted ranged from less than 10 to 100 per cent. 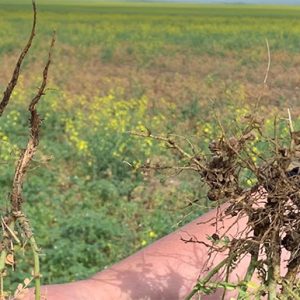 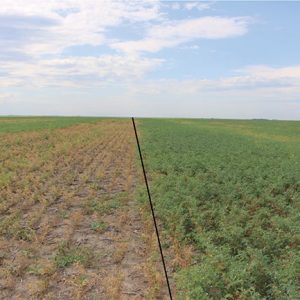 Nutrient issues not apparent
The samples were analyzed for nutrient content. Nitrogen, sulphur, phosphorus, potassium, magnesium, calcium, sodium, zinc, manganese, iron, copper, boron and aluminum content were compared between healthy and unhealthy samples. Total nitrogen and potassium were slightly lower than the normal range, but there was no difference between the healthy and the unhealthy samples. Micronutrient concentrations were generally above the critical levels and not related to apparent differences in plant health.

“The potassium levels were low according to the diagnostic criteria, but the stage of sampling is an important consideration as the criteria was for the vegetative stage and not the early reproductive state,” says Schoenau. “In terms of comparing healthy and unhealthy plants, there weren’t any differences that appeared to be a smoking gun for the issue.”

“I don’t see anything that points to metal toxicity to think that might be the issue,” says Schoenau.

Herbicide residues not likely the issue
The samples were analyzed for herbicide residues in the tissue. The herbicides screened are commonly used in chickpea production, and included ethalfluralin, flumioxazin, imazethapyr, Metribuzin, quizalofop-p-ethyl, clethodim, saflufenacil and trifluralin. Sharpe says when herbicide residues were detected, there were no differences between health and unhealthy plants.

“We were concerned about metribuzin because we do know that it does have an influence on Ascochyta severity, but the disease survey by Michelle Hubbard did not find this to be the case,” Sharpe says.

Ethalfluralin residues were found in two fields, saflufenacil at low levels in five fields, sulfentrazone in four fields, and trifluralin in four fields. Sharpe says that because the 16 fields had different herbicide use patterns but have similar symptoms, herbicide residues can’t be the direct reason for the health issue.

Clethodim, quizalofop, imazethapyr and flumioxazin were not detected in any of the fields sampled.

“I believe with the range of symptoms we are seeing, we could be seeing many little cuts [factors] that are causing stress to chickpeas,” Sharpe says.

In addition to moisture stress and poor chickpea tolerance to metribuzin, herbicide carryover from rotational crops, usually wheat, could add another little cut. Group 4 fluroxypyr and clopyralid, and Group 2 herbicides commonly used in wheat might be carrying over to add to chickpea stress. Sharpe plans to investigate this further in 2021. 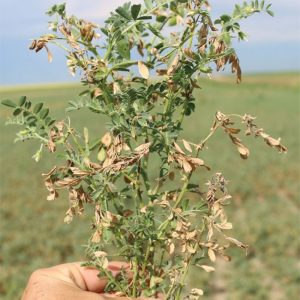 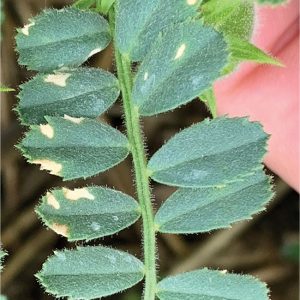 Disease trends not evident
The 2020 samples were screened for a wide range of root and foliar diseases, and viruses. Hubbard says there were no consistent trends in the percentage of pathogens detected or in abundance of pathogens between healthy and unhealthy plants. Additionally, Sclerotinia sclerotiorum and Verticillium dahlia were not detected.

Eight viruses that are transmitted by aphids were also screened for. Only lettuce mosaic virus and peanut stunt virus were detected in two samples each.

Insect puzzle
The Saskatchewan Crop Protection Lab received a sample of chickpea that had feeding damage on the nodules. Tansey says two species of insects were found including Delia platura (seedcorn maggot) and a dark-winged fungus gnat (Sciaridae).

The seedcorn maggot has a wide host range, so Tansey says the confirmation of feeding on chickpea was not unexpected. The previous crop was canola, and the insect likely carried over from that crop.

“It seems very likely that, given the large numbers present, they weren’t feeding on nothing, so it is very likely they found an alternate host [on chickpea],” Tansey says.

The dark-winged fungus gnat was surprising, since it is a fungus feeder, and is typically associated with mushroom production. Tansey says the seedcorn maggot feeding coupled with the wet weather could have led to increased fungal hyphae growth, which the gnat could have taken advantage of as a food source.

“However, they were tunneling in the nodules, so there is much more to this story,” he adds.

More research needed
During the fall of 2020, soil samples were collected and will be analyzed for other pathogens. The soil will also have a nutrient, pH and electrical conductivity analysis conducted, and will be screened for nematodes.

Hubbard, Sharpe and Schoenau hope to collaborate on a greenhouse trial to look at potential interactions between environment, herbicides and disease. Another survey may also be conducted in 2021.

Looking forward to the remainder of 2021, there are still many questions to be answered, including whether the health issue will even occur – especially given its mysterious nature. That leaves chickpea growers in a tough spot regarding chickpea acreage.

“Unfortunately, we don’t have all the answers, so I can’t make a definitive recommendation. But if I was a farmer in those hard-hit areas, I would keep my chickpea acres muted, and follow all the recommended production practices. Keep track of what you can. Scout around that flowering stage to look for the issue,” Hubbard says. “If I was a grower outside those hard-hit areas, I would be less worried and plant as much chickpea as you would normally, but don’t increase your acreage and be careful with all your production practices.”

And as a final suggestion, Hubbard encourages chickpea growers to try a chickpea/flax intercrop to see how it compares with monocrop chickpea for both Ascochyta blight and the mysterious health issue.