What are the key environmental parameters that impact pea yield? On the surface, the easy answer is temperature and moisture. Get them right and you get a top-yielding crop.

But what is the right combination? That’s what Rosalind Bueckert, a professor in the plant sciences department at the University of Saskatchewan (U of S) wanted to find out in an effort to better understand pea growth habits and to help improve pea breeding at the U of S Crop Development Centre (CDC).

“Pea cultivars are heat-sensitive so our goal was to investigate how weather impacted growth and yield for a dryland and an irrigated location,” explains Bueckert, who published the research in the Canadian Journal of Plant Science in 2015. “We explored relationships between days to maturity, days spent in reproductive growth – flowering to maturity – yield and various weather factors.”

Research in other countries had identified that high yield was related to early flowering, a large number of reproductive nodes and soil moisture availability during flowering. The longer the plant remained in the reproductive growth period, the higher the yield. Research had found that high daily maximum temperatures (31 C to > 34 C) during flowering for at least two to four days reduced yield due to abortion of buds and flowers, aborted young seed and potentially smaller seed. In Canada, though, the relationship between daily high temperatures, precipitation, and yield had not been explored.

Bueckert, along with colleagues Stacey Wagenhoffer and Tom Warkentin at CDC and Garry Hnatowich at Saskatchewan Irrigation Diversification Centre, Agriculture and Agri-Food Canada at Outlook, Sask., utilized the nine years of Co-op variety registration trials at the dryland Saskatoon site and the irrigated Outlook site to look at environmental effects on yield. They measured days to flowering when 50 per cent of the plants in a plot had an open flower, days to maturity, disease rating and seed size. The nine years covered the range of weather patterns with some hot and dry, warm, or cool and wet.

Check varieties in each year were utilized and represented current popular varieties. For example, in 2009 the five varieties were Eclipse, Cutlass, CDC Striker, CDC Cooper and CDC Golden. Peas were grown using recommended production practices. At Saskatoon, pea was not sprayed with a fungicide except in 2005 and 2009 when disease pressure was observed. At Outlook, pea was sprayed every year with a fungicide at flowering followed by a
second application 10 to 14 days later. 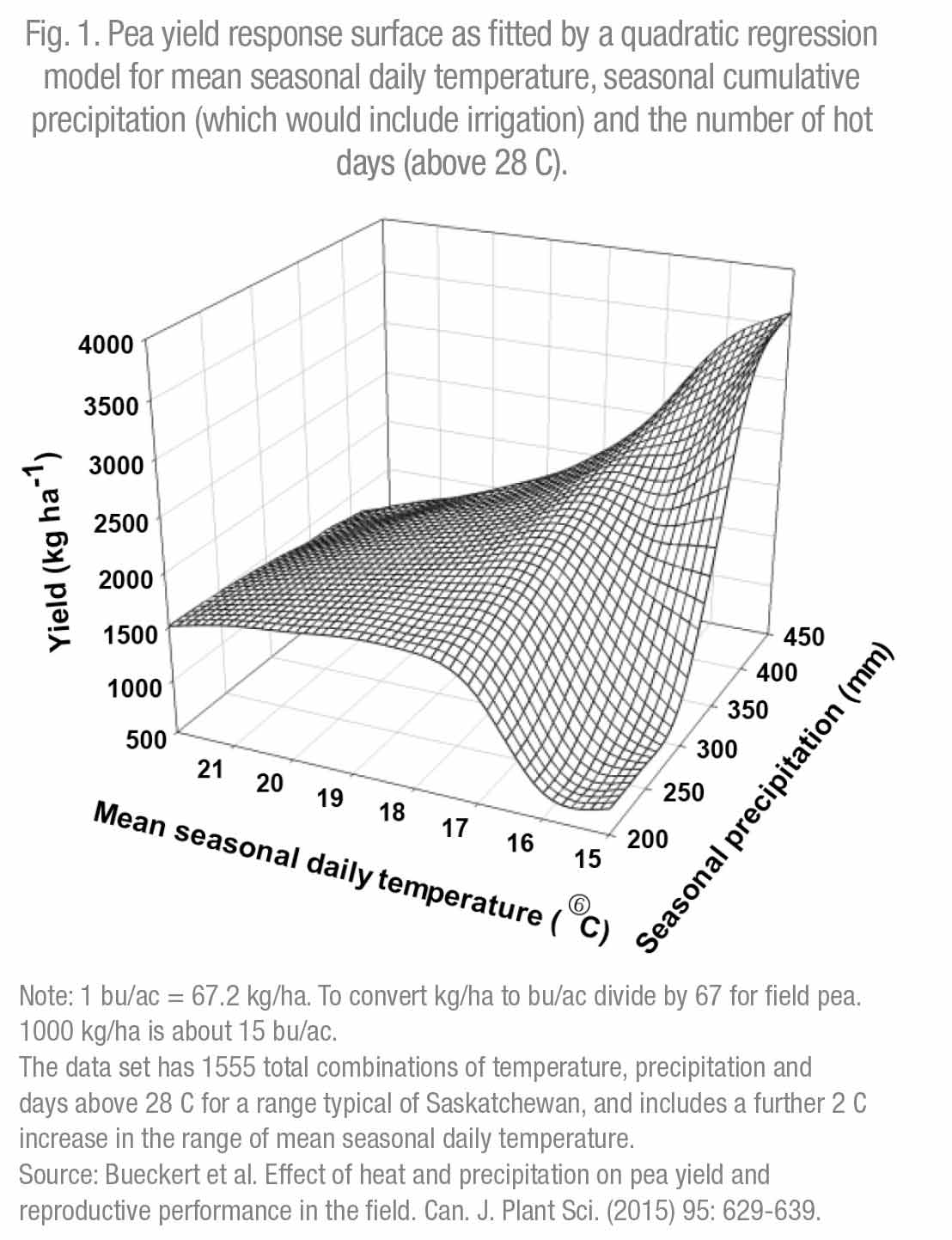 The researchers found that when the mean maximum temperature was greater than 25.5 C at the dryland site, the number of days in reproductive growth was reduced to less than 35 days. More than 20 days above 28 C meant less time in the reproductive phase and lower yield for dryland pea.

“The threshold maximum temperature for yield reduction in the field was closer to 28 C than 32 C from [other] published studies, and above the 17.5 C mean seasonal daily temperature,” Bueckert explains.

At Outlook, irrigation helped to buffer the effect of heat, and the pea remained in reproductive growth for 35 to 40 days in a wider temperature range of 24.5 C to 27 C.

To put those temperatures into perspective, average climate data shows that from June to August, Saskatoon experiences 11.5 days above 30 C and Outlook 12.3 days.

Plant breeding implications
On the Prairies, late-maturing varieties take about 94 days to mature, with medium maturity varieties around 90 days and the earliest at 86 days. Yet the normal frost-free period for Outlook is 123 days and 117 days for Saskatoon. Bueckert says plant breeders could lengthen maturity in pea by at least seven days without frost risk. If plant breeders could get the pea to flower earlier and longer (more indeterminate growth), yield potential could be increased.