Most are beyond a grower's control.

At a time when growers are looking for every possible advantage in managing
field crops, a simple, yet inescapable truth is becoming clearer where weed
control is concerned: there are only so many influences a grower can control.

There are seven different factors that can cause poor weed control with herbicides.
Of those, it can be argued that only two are under the direct control of the
grower, and even those can be influenced by other uncontrollable factors. Weather
extremes are at the top. After that, soil characteristics, weed density, application
timing and application problems are next, and almost all of those, in one form
or another, are beyond the control of the grower.

In terms of the weather, rain is the key; too much, too little or too soon
after application are the three most pressing factors. With pre-emergence herbicide
programs, timely rains dissolve the herbicide into the soil water solution,
so it can be taken up by the developing weed seedling. In addition, rainfall
helps to reduce photo-degradation and volatilization losses. If no rainfall
occurs within seven to 10 days, the weed control could be reduced with Dual,
Frontier, Prowl, Pursuit, Sencor and Lorox. If there is too little rain, then
shallow cultivation or rotary hoeing would be an option.

In post-emergence applications, too little rain can result in thicker cuticles
and corresponding poor absorption by the weed. Sikkema points to Assure, Excel,
Venture, Poast and Select as grass herbicides in this case, with Pardner, Reflex
and Basagran as broadleaf herbicides that are susceptible.

Having too much rain will cause leaching of a soil applied herbicide below
the weed seed's germination zone. Banvel is a candidate for poor weed control
with this condition. Rain too soon after a post-emergence application may simply
wash off the herbicide. In particular, Basagran requires six hours free of rain,
Banvel needs four, Pursuit two and Pardner needs one.

Into the soil
Soil characteristics, to a large extent, cannot be controlled by the grower.
Although organic matter and pH levels can be adjusted, there is little that
can be done about heavier textured soils. Most soil applied herbicides are bound
by clay and organic matter, so the herbicide rate required is dependent on the
soil type and organic matter. Soil pH, on the other hand, affects the metabolites
formed in some herbicides.

At low pH, Sencor can form cations in the soil, which are tightly bound by
the soil resulting in diminished weed control, while Broadstrike forms a less
active metabolite, also resulting in poorer weed control. Dual, Frontier, Treflan
and Sencor are others that are affected by tight binding in the soil.

Timing is everything
Of the parameters that growers can control, application timing is perhaps the
most important. The thing to keep in mind is that annual weeds are generally
easier to control when they are young and actively growing. As the plant develops,
the cuticle may become thicker or the plant growth rate reduced.

If herbicides are applied to quackgrass during the heat of summer when the
plant goes partially dormant, you can have poorer translocation to the root
system and consequently poorer control. So with quackgrass, the best control
is obtained with spring or fall applications when there are at least three or
four new leaves.

In perennial broadleaves, most of the photosynthate is used prior to flowering
to support above-ground reproductive growth. As a result, there is very little
translocation into the root system. At the early bud to flower stage of the
weed, there is greater movement of the photosynthate to the underground structures,
and therefore better weed control. 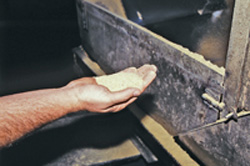 By incorporating herbicides properly, a grower can reduce losses to volatilization
and photo-degradation in the soil. It can also provide uniform distribution
of the herbicide. In terms of placement, most annual weed seeds germinate in
the top 2.5cm (one inch) of the soil, and anything placed deeper could result
in poorer weed control. Conversely, there are specific weed species where deeper
placement is required for optimum results. Dual and Frontier are two products
that provide more consistent control of nutsedge when applied as pre-plant incorporated.

Herbicide antagonism is another controllable condition. Tank-mixes have become
an important management tool for the control of a range of weed species to avoid
having to spray twice. However, some herbicides simply do not mix: Basagran
antagonizes annual grass control with Poast and Select; Classic and FirstRate
reduce yellow foxtail control with Assure; clay based formulations antagonize
glyphosate, as do some foliar fertilizers. It is also important to remember
that herbicide rates are species-dependent. The rate must be adjusted depending
on the weed species composition, weed size and environmental conditions. -30-

*Dr. Peter Sikkema is an assistant professor of field crop weed management
at Ridgetown College, University of Guelph in Ontario.

There are so many different factors that go into herbicide applications and
their effect on various weeds. But when it comes to making the choice of which
herbicide to use, here are some quick tips to keep in mind.

Another aspect worth keeping in mind are those weeds with known resistance
to herbicides.