Plant hormones are chemicals in plants that regulate almost all aspects of plant growth and development. Hormones play a critical role in how plants respond to biotic and abiotic factors, including sunlight, soil conditions, soil water and nutrients. Hormones are naturally occurring in plants, but some specific hormones can be made synthetically for application to crops. 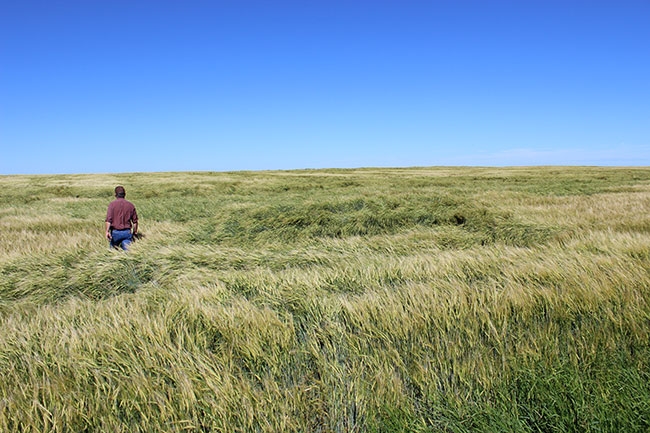 The lodging shown in this cereal crop lodging could potentially be reduced with the use of plant growth regulators. Plant hormones are chemicals in plants that regulate almost all aspects of plant growth and development.

Plant hormones are grouped into five classes depending on their chemical makeup: abscisic acid, auxins, cytokinins, ethylene and gibberellins. These hormones control or influence all aspects of plant growth and reproduction, including seed germination, growth of roots, stems and leaves, plant flowering, seed development, seed fill and seed dormancy.

In Western Canada, we presently use two types of plant growth regulators (PGRs) that are commercially available. The first type are ethylene-releasing agents (for example, Ethrel, with the active ingredient ethephon) registered for use with wheat. When applied at the flag leaf growth stage (GS 38), an ethylene-releasing agent decreases plant height and increases stem wall thickness. The second type of PGR is the gibberellin inhibitor, which reduces stem elongation, shorten the crop and reduce lodging. In Western Canada, Manipulator (active ingredient chlormequat chloride) is registered for use on wheat.

Plant hormones are frequently interactive to assist crops to respond to varying environmental conditions. As we learn more about how crops grow and how hormones influence crop growth and yield, the more we can use science to improve crop growth and production.

Auxins
Auxins are responsible for many aspects of plant growth, including cellular elongation and stimulating shoot growth. Auxins are responsible for the way plants grow towards light, a process called phototropism. Auxins regulate which cells elongate to control plant growth direction. Auxin is manufactured mostly in the shoot tips, and in parts of developing flowers and seeds. Auxins maintain dominance of the main shoot over the growth of tillers and buds, and maintain dominance of main root growth over lateral root growth. Auxins control plant aging and senescence and play a role in seed dormancy.  However, plant roots are very sensitive to auxin levels, which can inhibit root growth.

Synthetic auxins, such as 2,4-D, are used as herbicides to kill many types of broad-leaved plants. This herbicide works by causing the cells in the tissues that carry water and nutrients, to divide and grow without stopping, causing plants to literally growth themselves to death.

Ethylene
Ethylene is a gaseous hydrocarbon that often occurs in larger amounts when plants respond to biotic or abiotic stress. Ethylene can diffuse from its site of origin into the air to affect surrounding plants. Roots, senescing flowers and ripening seed can produce large amounts of ethylene. Ethylene production can be promoted by auxins.

Gibberellins
Gibberellin hormones play a number of roles. They are present in plant shoots and seeds. Initially, gibberellins cause seeds to initiate germination. Gibberellins help to control the transition from vegetative to the reproductive growth. Gibberellins play an important role in stem strength and promote stem elongation between nodes on the stem. Increased gibberellin levels will elongate the internodes to increase stem length.  A reduction of gibberellin reduces stem length between internodes to cause dwarf plants. This results in less space between nodes on a stem and leaves are clustered closer together.

Increased inter-plant competition can increase gibberellin and auxin levels, coupled with reduced ethylene levels. In theory, the application of ethephon, or a growth retardant, could be used to regulate shoot morphology and growth. In the future, canola breeders may need to include dwarf characteristics in new canola varieties to reduce plant height and increase leaf area to increase canola yield potential.

Canola yield is strongly affected by water and nutrient availability and is also influenced by several plant hormones. An optimum level of ethylene is needed for reproductive development in canola.  Ethylene can play a role in seed development and maturity in canola. The number of seeds per pod in canola is affected by gibberellin. An increase or decrease in ethylene production from normal levels during flowering can cause abortion of seed and seed loss.

Pea
Ethylene controls stem elongation in pea. When germinating pea seedlings encounter a surface soil crust, the ethylene hormone increases in response to this abiotic stress by inhibiting cell elongation and in turn, promotes the pea stems to be shorter and thicker. This gives the pea shoot greater strength to effectively push and break through the crusted soil to successfully emerge.

Pea cultivars in Western Canada are typically semi-dwarf and semi-leafless at growth. The development of pea leaves and tendrils is strongly controlled by plant hormones. Shorter stem length is caused by gene mutation that decreases the efficiency gibberellin. The mutation results in lower levels of gibberellin in the stem resulting in pea plants with shorter internodes and reduced stem length. A semi-leafless pea has stipule leaves that surround the main stem, but does not have leaflets. Tendrils are more pronounced, causing the intertwining of tendrils among plants to keep plants upright.  This causes the pea to remain more upright as it grows and matures, which makes harvesting easier. During the development of leaves and tendrils, which originate from the apical bud (growing point), leaflets form in areas with low auxin levels and tendrils form in areas with high auxin.

Wheat
In recent years, cereal crop breeding has used dwarfed wheat varieties with altered or a modified sensitivity to gibberellins. Research has shown that wheat with reduced levels of growth-active gibberellins have shorter stems that reduce lodging and can improve grain yield.

Plant growth regulating chemicals can be applied to control lodging of taller wheat genotypes. Recent research in Western Canada has shown the effects of PGR application but results are greatly affected, by application rates and the crop growth stage of application. There are even varietal differences in response to PGR application.

Various types of PGR products are used in Europe with cereal grains. The most common inhibitors of gibberellins are chlormequat chloride (Cycocel), trinexapac-ethyl (PrimoMaxx or Moddus) and paclobutrazol (Cultar) (Kurepin et al. 2013). Most are applied at earlier growth stages to reduce lodging and increase grain yield.  Later applications have been shown to reduce grain yield.

There have been promising advances in understanding of abscisic acid, ethylene and cytokinin hormones in signaling response pathways in plants and the interactions between them that can impact crop growth and yield. Researchers are realizing that changing the ratios and relative abundance of hormone concentrations in plants may be a better strategy than changes in the concentration of a single hormone to improved crop response to stress or to achieve optimum crop yield.

Research is noting that crop response to abiotic or biotic stresses often cause overlapping hormone responses. Crop breeding and crop management for particular abscisic acid:ethylene and abscisic acid:cytokinin ratios or relative abundances may be an appropriate strategy in the future.

As researchers develop a greater knowledge and understanding of plant hormones on crop growth, crop breeding and management practices can be developed to further enhance crop production and yield.


Related
Plant hormones: they are not just for horticulture anymore
Understanding the effects of sunlight, temperature and precipitation
Researchers strive to develop drought-tolerant canola
A balancing act