Precision Ag
The colour of clean

Over the last five years, optical colour sorters have been springing up at seed cleaning plants on the Prairies, especially in Alberta. This computerized technology rapidly and accurately removes impurities – including problems like ergot – that are different in colour from the crop being processed. So the technology provides a significant leap forward in upgrading grain and in making seed even cleaner for healthy crop stands. As the capabilities of these sorters continue to grow and their cost declines, they could become standard equipment for cereal seed processing on the Prairies.

The Bashaw Seed Cleaning Co-op plant in Bashaw, Alta., was the first seed cleaning co-op in the province to get a colour sorter, back in 2009. “By looking in the literature, we saw how these colour sorters had dramatically changed the food industry. So we pursued the idea of whether this technology could be incorporated into the seed industry. If we could improve the quality of seed to the same degree, then this would be a good investment in the long term,” says Bill Sinclair, manager of the Bashaw plant.

The people involved in the Bashaw plant saw the potential for colour sorters to add value to farmers’ seed and to deal with some increasing plant disease issues such as ergot. So they purchased a three-chute colour sorter for $230,000 plus about $70,000 for installation (including the cost of an air compressor and a heated room). Sinclair explains, “The capacities of colour sorters are determined by how many modules or chutes they have. Each chute is capable of handling probably three to four tonnes of product per hour, depending on the size and weight of the product. Our plant usually operates at about 250 to 300 bushels per hour, so the three-chute machine was more than adequate.”

Adopting this new technology offered several challenges for the plant. “Obviously the price tag was the first challenge. It’s the most expensive piece of equipment that any seed plant has put in their building since the inception [of Alberta’s seed cleaning co-ops, most of which were started about 50 to 60 years ago]. Then learning how to use the new technology proficiently is a challenge whenever you start something new,” he notes.

“And then the challenge became the additional demand that the sorter created for our services.” Although it was stressful for the plant to deal with the much greater workload, including operating 24 hours a day at times, the extra business also enabled the plant to pay for the sorter in less than two years.

The colour sorter is used in an addition to the plant’s other seed cleaning equipment. “Every machine is designed to make a selection of good versus bad based on different principles. The indent separates based on the length of the seed. The screen machines select based on the width of the kernel or the physical dimensions of it. The gravity tables operate on the principle of the surface area versus the mass density. The colour sorter sorts by colour. So the combination of all of them gives a seed cleaning plant the best chance of doing the best job it can,” explains Sinclair.

The Bashaw plant provides two types of services: dockage removal for product that is going into a feed market or to an elevator; and seed cleaning. For either service, colour sorting is offered as an extra for a modest fee.

How optical sorters work
“All colour sorters have the same three components: cameras, air-based ejectors, and software,” explains Dale Alderson of Intel Seed. The operator tells the software which colours should be ejected from the seeds flowing down the sorter’s chutes. When a camera detects an unwanted colour in the flow, compressed air is aimed very accurately to eject the specific material with the unwanted colour. The operator monitors the seed flow through the sorter and adjusts it as necessary to balance the flow with the complexity of the specific sorting task.

“A key difference between sorters is the sophistication of the software. The original sorters could differentiate between black and white. These days, they can take out material with differences in shades of colour, and they can simultaneously sort out by seed shape and seed size. Of course today’s technology is much faster too, so the capacity in terms of bushels per hour is better,” says Alderson.

“Colour sorters make really nice, pristine seed [so farmers can put the best possible seed in the ground]. And the sorters can upgrade grain – they can take out ergot completely and dramatically reduce the amount of fusarium,” he notes.

“Ergot is a nasty thing to have in your grain, but it is easy for the sorter to remove because ergot is always black or dark brown, and that is quite a colour contrast to any seed it’s with. So you’ll get the maximum volume through the sorter if you ask it to just take out ergot. The operator can set the sorter so that 100 per cent of the ergot is removed. Although gravity tables do a really good job of removing ergot, they can’t get 100 per cent.

Fusarium has shades of colour. Sometimes it’s whitish, sometimes it’s blackish, and so on. “So removing fusarium damaged kernels will slow the sorter down because you’re asking it to do multiple tasks at the same time. You can’t always get to zero with fusarium because sometimes it is hidden in the crease of the wheat kernel, so the sorter can’t see it.”

Another advantage of these sorters is that they are lighter and smaller than gravity tables, so they are better suited to mobile systems for on-farm use. Sinclair notes, “We were the first co-op plant in the province to offer portable services. Our portable colour sorter is only designed for and used in a dockage system. We had it built for times when we have ergot outbreaks or other needs that exceed our plant’s physical capacity to handle all the business.”

The Bashaw plant’s mobile system has an aspirator to remove light, chaffy materials, then a screen system to take out larger material such as sticks, and then the colour sorter, which is used if some degrading factor is present in the grain, like fusarium or ergot.

Colour sorters are sometimes referred to as “optical sorters” because they have the potential to sort for more than just colour. A fairly recent advance is the ability to also rapidly sort seeds based on size and shape. This enables the sorters to remove things like broken kernels, which won’t germinate, as well as helping to ensure removal of unwanted seed types and other undesirable materials.

Alderson sees many exciting applications for the technology such as preparing grain for the gluten-free market. “Gluten is found in wheat and barley, so that market can’t have any wheat or barley kernels in their oats, for instance. It has always been a challenge to guarantee 100 per cent purity with the old technology. With this colour sorter technology, you might have to slow the machine down significantly, but you’ll get 100 per cent of the wheat and barley out of the oat sample.”

The price challenge and adoption
Alderson and his partners at Intel Seed started looking into optical sorters while they were developing their seed cleaning plant at Oakville, Man., which is expected to open in spring 2014. They wanted to include a seven-chute colour sorter in the plant, but they were worried about the cost.

“Colour sorters have been around for quite a while for [higher value] products like edible beans. But the sorters cost around $250,000 to $300,000 per unit, and it can be hard to make that work financially in cereals,” says Alderson.

Through doing their homework, the partners were able to find less expensive optical sorters from AMVT, a Chinese company. “So we talked to AMVT, and we went to China to look at their equipment. We decided to use their colour sorter, and it evolved into striking a deal that we would have the distribution of their colour sorters for Canada.”

Alderson thinks that lower costs for colour sorters, along with the ongoing advances in optical sorting technology, will encourage more and more adoption of this technology for use with cereals.

Adoption of the technology is occurring faster in Alberta than in Manitoba and Saskatchewan. According to Sinclair, about 40 of the 71 seed cleaning co-ops in the Association of Alberta Co-op Seed Cleaning Plants either already have a colour sorter or are in the process of getting one.

Sinclair thinks a key reason for the rapid adoption in Alberta is the co-op approach to the seed cleaning industry in the province. “We were set up 60 years ago to be a co-operative effort to supply high quality seed for farmers to have a better chance to make a living,” he says. “Alberta is the only province in Canada where the seed processing industry is organized like that. Operating in that co-operative principle, we regularly have meetings and share our ideas. There is always some discussion about what any particular co-op has done, is doing or is planning to do. And there is always a follow-up about whether it was successful, the pros and cons, and so on. If the consensus is that what you’ve done is beneficial, that information is shared very freely and willingly with any co-op that is interested. If we share the information, then everyone can benefit.”

Next steps
“I think colour sorters will soon be an expected, standard piece of equipment in any facility that wants to fulfil their mandate as being the best possible place to get your seed cleaned,” says Sinclair. “We’ve proven in the last four or five years that plants with colour sorters are getting busier. Demands for seed cleaning services are increasing in every plant that has put one in.”

The next advance that Sinclair wants to add to the Bashaw plant’s sorter is shape recognition. And further down the road, he’s looking forward to getting near-infrared (NIR) sensing, which will enable the technology to sort grain based on quality factors like protein content. He notes, “Upgrading colour sorters is mostly a software upgrade – you don’t have to replace your machine. So upgrading costs are fractional as compared to your initial investment.”

Intel Seed’s sorters are capable of both colour and shape sorting. Although these sorters do have NIR available as an option, Alderson cautions, “The NIR technology is not at the speed yet to be in sync with the colour sorter flow volume. NIR is going to be an amazing tool once it’s operating for high volumes. For instance, in malting barley, it could pick out a uniform protein level, which is beneficial to the malt industry. And some wheat markets would be willing to pay a high price if you could promise them a specific per cent protein. I think that is where the technology is really going to come into use, especially in the elevators. And I could see it even on some large farms, where the farmer says, ‘I could get more for my 17 per cent protein wheat, and I could sell my low protein wheat to the ethanol industry or feed it.’ It makes you wonder where this technology will go next.”

He adds, “I’m really excited about this technology. I see it in 10 years as being a common thing to have the technology at the farm level, at the seed processing plant and at the elevator.” 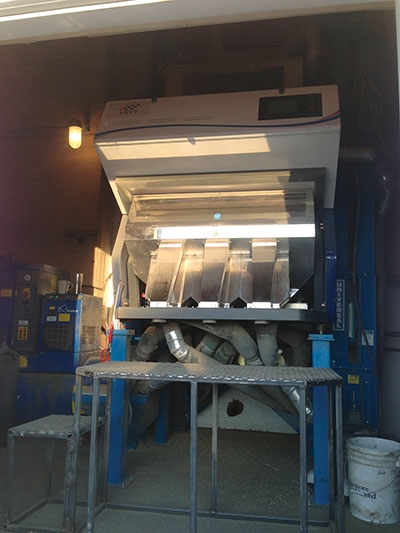