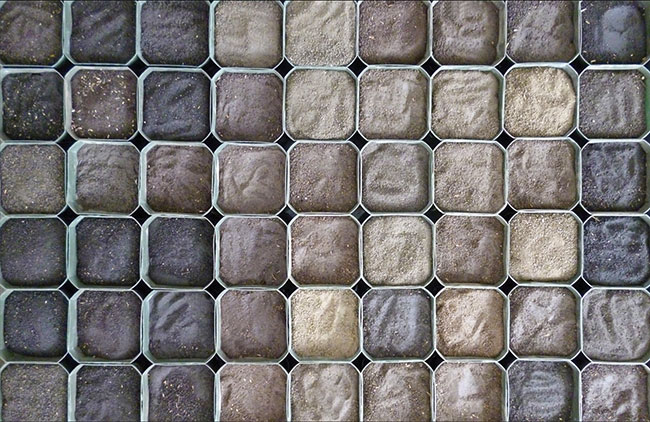 A diverse collection of soil types from within the five soil zones in Saskatchewan. Photo courtesy of Ryan Hangs.

For more than two decades, the adoption of conservation agriculture management practices has resulted in increasing soil organic carbon (SOC) sequestration in Prairie soils. This increase in SOC contributes to soil health and nutrient cycling in cropping systems, and has important implications for climate change as a means of sequestering atmospheric carbon dioxide (CO2). Although past research has provided valuable information regarding the short-term efficacy of conservation agriculture management practices to increase SOC levels, limited work has been done to examine the long-term effects on the quality and stability of sequestered SOC in Prairie soils.

“We were interested in looking at the influence of the suite of conservation agriculture practices growers began to adopt in the 1990s, such as direct seeding, reduced tillage, extended and multi-crop rotations and other practices, on the nature of SOC in fields over the long-term,” explains Jeff Schoenau, professor of soil science and SMA chair at the University of Saskatchewan. “Carbon in organic form is a major constituent of soil organic matter that is associated with numerous physical, chemical, and biological properties controlling soil productivity and a key metric of soil quality and health. As part of this long-term study, we wanted to determine the nature and permanence of SOC contained in contrasting Saskatchewan soils from across the soil zones that had been under long-term conservation management.”

This project was part of a collaboration between Schoenau and Ryan Hangs at the University of Saskatchewan, and Brian McConkey and Mervin St. Luce with Agriculture and Agri-Food Canada (AAFC) in Swift Current, Sask., who initiated the original study in 1996 to quantify and model changes in SOC content. Several commercial direct-seeded fields representing a diverse collection of soil types from within the five soil zones of the province were originally established and sampled in 1996 and again at the same locations in 2018, with ongoing monitoring throughout the study. Field crews from the University and AAFC collected representative soil samples (zero to 40 centimetres) in the spring of 2018 adjacent to the 1996 sampling locations for a total of 90 fields that still remained under direct-seeded annual crops since the start of the project.

Schoenau’s project focused on determining the nature and permanence of SOC by comparing soil samples from the 1996 and 2018 collections for all 90 fields at his lab at the university. Surface soil samples (zero to 10 cm) from the 2018 sites and the corresponding 1996 samples were incubated for six weeks at 20 C and 75 per cent of field capacity. This incubation study included various components and measurements related to SOC quality and permanence, including an estimate of the respirable CO2 carbon (CO2-C), water-extractable organic carbon (WEOC), light fraction carbon (LF-C) and microbial biomass carbon (MB-C).

“One of the highlights from our study is there was significantly more total SOC in the top 10 cm after 21 years of conservation management,” Schoenau says. “This demonstrates that those conservation management practices adopted and employed over the long-term are increasing SOC and improving soil organic matter quantity and quality. We saw the greatest increase in SOC in the samples from the brown and dark brown soil zones, where SOC was the lowest to begin with. This follows the principle that soils with the lowest initial SOC content to begin with are the soils where the biggest increase or gains in SOC storage are typically achieved. We also used water-extractable C measurements and a light fraction test to assess the effects on easily decomposed fractions of SOC. The results showed a minor increase in water soluble organic carbon, while the light fraction component showed no significant change.”

“Where we did see a significant increase was from the microbial biomass carbon measurement, which is an active component of soil organic matter often used as an indicator of soil health. Our evaluation and comparison showed a significant increase of microbial biomass over time. This is good news showing a significant increase in an important part of the living component of soil that contributes to nutrient turnover and other important biological processes in the soil. Another positive finding was from the microbial respirable CO2 carbon measurements within each soil, which showed little difference between 1996 and 2018. There were also no changes in the light fraction measurements. This suggests a similar permanence of soil organic matter contained in the soil from both sampling times. These systems appear to be accumulating both active and more stable soil organic matter and SOC in the soil and the increases we are seeing in SOC do have permanence.”

Researchers also used ATR-FTIR spectroscopy to assess the nature of soil organic carbon components in surface soils via spectral-based speciation of SOC. The results tended to agree with the dynamics of carbon identified in the microbial respiration, indicating these conservation management practices are leading to improved quality and quantity of soil organic matter. It also indicates the long-term effects are increasing the stability of sequestered SOC in Prairie soils.

“The results of our study demonstrate that the long-term conservation management practices adopted are producing positive changes in the amounts and quality of the soil organic matter in Saskatchewan surface soils that benefit the storage and cycling of carbon,” Schoenau says. “As well, more of the SOC is present in an active, dynamic living fraction that contributes to soil health and nutrient cycling, and is sequestered in relatively stable forms. The adoption of conservation management practices is contributing to soil organic matter, soil health and nutrient cycling in cropping systems, a good news story for Western Canada.”