A wheat leaf rust resistance gene that’s been overcome by virulent pathogens is called a “defeated gene,” according to Brent McCallum, a pathologist with Agriculture and Agri-Food Canada. But its counterparts – resistance genes that still prove effective against pathogens in the field – are not called “victorious genes.” They’re known as “durable genes” that can be depended on for good control, year after year. 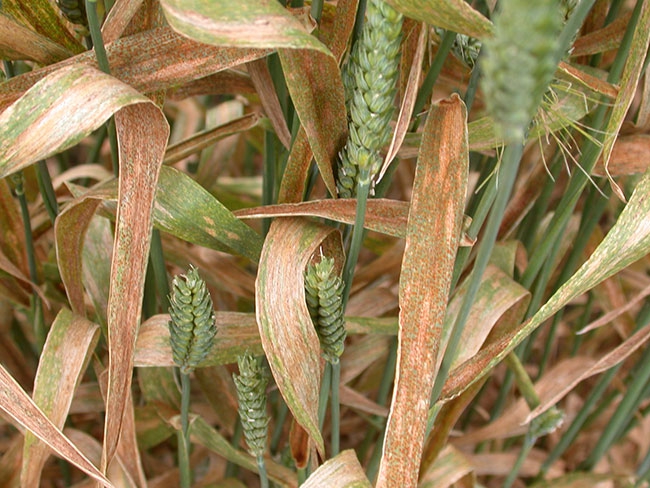 McCallum says wheat leaf rust, a fungal disease caused by the pathogen Puccinia triticina, has been a production problem in Canada ever since producers started to grow wheat. Varieties with poor or intermediate levels of resistance can take heavy yield hits in the field if producers don’t spray.

“In the early years of production it was a much worse problem because we didn’t have the tools to deal with it. Most varieties were susceptible to the disease,” he says. “AC Barrie was our number one variety for a long time, and fairly susceptible to leaf rust. If producers didn’t spray, they’d get yield losses. The leaves look rusted and have a loss of moisture, anywhere from five to 15 per cent.”

Breeders and pathologists have been working on leaf rust for nearly a century. In that time, they’ve developed varieties with good resistance. Good genetics combined with fungicides keep leaf rust mostly curbed in Western Canada.

But behind the scenes, scientists continue working to maintain that level of control. The job of breeding high-performing varieties is never done, as pathogens are constantly evolving to cope with environmental challenges and can mutate to overcome resistance genes.

This is the case with the gene Lr21, discovered by researchers in the 1970s and used in wheat breeding programs through the 1980s and 1990s. Around 2012, P. triticina changed to exhibit more virulence against Lr21. Over the last few years, researchers have watched Lr21’s effectiveness break down.

For all the defeated genes, there are still some that stand strong. For example, Lr34, a resistance gene that has been used for over 50 years in Canadian wheat breeding programs, continues to be durable against P. triticina.

“No resistance gene is ever useless. Now we’re finding that so-called defeated genes should be kept in your cultivars and more effective genes can be added in ‘gene pyramids’ – three to six genes that build a pyramid of resistance,” he explains.

Resistance genes work as a unit and help prolong a variety’s lifetime. Because of these gene pyramids, producers are unlikely to notice problems with varieties containing Lr21 in the field, at least when the other genes in the pyramid are still effective.

Annual surveys
If it’s hard to spot problems in the field, how do researchers know that Lr21 is defeated?

McCallum is part of a team that conducts annual crop surveys to check in on how wheat leaf rust pathogen populations are changing over time, where the disease is present in Canada, how severe it is, and which cultivars it’s affecting. The team collects samples locally and receives samples from co-operators located across Canada’s wheat-growing regions.

“In the winter we do a virulence survey, isolating something like 300 isolates from across Canada, which represents the populations in the field, and then we determine the virulence of those populations,” he explains. “We test isolates coming in on lines with just one resistance gene and from this we can see which genes are effective and which ineffective, and the proportion of the population that is virulent.”

This survey data is less for producers and more for the benefit of researchers, to help breeding programs stay up to date. But it has an obvious trickle-down effect for producers: susceptibility or resistance of all varieties is listed in annual seed guides and McCallum’s research group continues to test all varieties, even after registration.

“If there are relevant changes, such as the emergence of Lr21 virulence, we try to alert the breeders and closely watch the levels of disease on the wheat cultivars in trials such as the Manitoba Crop Variety Evaluation Trials, as well as our own nurseries, to detect any changes in the resistance of the cultivars,” McCallum says.

As P. triticina evolves rapidly, he explains, breeders update their disease inoculum to be made up of the current population. “For example, the inoculum, or the rust that we put out in the spring this year, would be made from the isolates that we collected last year, in 2016,” he says.

Staying on top of wheat leaf rust is a concerted effort involving many people across Canada, from geneticists to breeders.

“It’s very collaborative. I work with a lot of other scientists from other programs and that’s been really rewarding. Nearly all my projects have five or six scientists working on them,” McCallum says.

This is the picture painted in McCallum’s recent review of wheat leaf rust research and the development of resistant cultivars in Canada, published in the Canadian Journal of Plant Pathology.

“The body of knowledge generated by pioneering Canadian rust scientists has been capitalized upon by successive generations of dedicated scientists in Canada and around the world to further understand the P. triticina-wheat system towards even more effective and durable genetic control of leaf rust in the future,” McCallum writes in the paper’s conclusion.

But if wheat leaf rust breeding is a battle, producers are on the front lines. McCallum says a producer’s best strategy is still to purchase seed with good resistance and spray when necessary.

“Early seeding helps because the epidemic builds up every year from southern U.S. spores, and if you can seed early, you can avoid a lot of it,” McCallum says. “Use best management practices and watch your crop so you can see if anything is developing.”