Dense, compacted subsoil layers can have serious crop yield impacts. They can impair root penetration, limiting root access to water and nutrients, and they can decrease water infiltration and increase the risk of ponding, runoff and erosion. One way to try to improve soil with a compacted layer is to use a deep tillage implement, but that can be expensive. So University of Saskatchewan (U of S) soil scientist Jeff Schoenau is leading a new project to evaluate precision subsoiling.

A common cause of subsoil compaction is repeated wheel traffic, for example in travel and loading areas, especially if heavy field equipment is used on clayey soils in wet conditions. As well, natural soil-forming processes can create a hardpan layer, such as in Solonetzic soils.

Solonetzic soils have a hard, sodium-rich B horizon (the soil layer below the topsoil, or A horizon). “The presence of large amounts of sodium causes some soil dispersion and the creation of these hardpans due to clay movement into the B horizon,” Schoenau explains.

The majority of Canada’s six to eight million hectares of Solonetzic soils are found in Alberta and Saskatchewan. Solonetzic soils tend to occur in areas with high-sodium parent materials or where groundwater carries sodium into the soil. For example, there are broad areas dominated by Solonetzic soils along the edge of the Missouri Coteau in Saskatchewan, such as the Central Butte area and the Radville to Estevan area.

Building on previous findings
Although subsoiling was studied in past decades on the Prairies, not much research had been done recently until Schoenau’s research group conducted a study that began in 2010. In that study, they used a paraplow, a type of subsoiler that has been on the market for quite a while. As the tip of a paraplow moves through the subsoil, it lifts and then drops the soil column, loosening the soil. It causes limited disturbance of the soil surface, as the loosening point is run at a depth of 45 centimetres.

One site had soil structural issues because of its Solonetzic soils. Unfortunately, the study’s fieldwork took place during two unusually wet years, 2010 and 2011, and the Solonetzic site had to be abandoned due to flooding.

At the other sites, the researchers didn’t detect any serious compaction problems. Nevertheless, subsoiling did affect soil conditions and water infiltration at those sites.

“One of the things we found is that subsoiling did significantly increase the infiltration of water and reduced the density and strength of the soil. How long those effects persist depends on the moisture conditions; we tended to see less persistence if it was really wet than if it was dry,” Schoenau says.

Subsoiling resulted in variable and typically small yield increases of about five to eight per cent. He notes, “If you compare that yield advantage to the subsoiling costs, it was about a breakeven proposition. We concluded that the effects would have to persist longer than one year or else be of a larger magnitude in order for subsoiling to be really economical on these particular soils, where serious compaction issues were not evident.”

Current project
So, if you break even on subsoiling costs in soils without serious compaction problems, then might subsoiling be economical if it were just targeted at those patches in a field where serious soil structural problems occur?

He is working on this project with his colleague in the department of soil science, soil physicist Bing Si. The Saskatchewan Agriculture Development Fund, Saskatchewan Wheat Development Commission and Western Grains Research Foundation are funding the project.

The two sites for this project are both in the Lake Diefenbaker area near Central Butte and are both dryland locations. At one site, the researchers have induced some soil compaction through repeated wheel traffic. At the other site, they have set up a smaller experiment on a field with significant structural limitations due to a Solonetzic hardpan layer.

In the fall of 2015 at the two sites, the researchers began by mapping the location and depth of spots where the subsoil’s soil strength and density were high enough to limit root growth. “We have a cone penetrometer, and we use a sampling grid to make maps of the penetration resistance [soil strength] before and after the subsoiling,” explains Schoenau. A cone penetrometer is an instrument consisting of a narrow steel shaft with a cone at one end. As the penetrometer is pushed into the soil, the pressure gauge at the top end of the shaft indicates how much pressure is needed to move the cone through the soil.

Also in the fall, the researchers carried out the subsoiling in replicated plots, comparing three treatments: subsoiling only those parts of the plot identified as having a dense subsoil layer; subsoiling the entire plot; and no subsoiling, as a check.

They used a modern subsoiling implement – a John Deere 2100 minimum till ripper provided by Western Sales, a Saskatchewan farm equipment dealer. These types of subsoilers have a set of coulter disks to open the soil and then a following set of shanks with a near-horizontal tip (or share) at the base of each shank. Schoenau says, “As the unit moves through the soil there is little disturbance at the soil surface, just from the shank itself. But down deep at the depth of operation, which is around 30 centimetres, the shank creates a lifting or loosening action.”

He explains that dense subsoil layers typically occur at variable depths below the surface. He adds, “In some of our early work, we found that if we went too shallow, subsoiling didn’t work as well. Similarly if we widened the spacings above what was recommended and went to really wide spacings, we didn’t get as good results.”

For the next two years, the researchers will be monitoring the effects of the 2015 subsoiling on soil properties and crop yields. Schoenau says, “In the spring of 2016, we will be looking at the persistence of the effects on bulk density and penetration resistance. Then we’ll measure crop yield at the different transect points in our replicated plots. And we’ll be doing that for the following two years so we will have yield data from wheat in 2016 and canola in 2017.” Then they’ll evaluate the costs and benefits of precision subsoiling compared to subsoiling of a whole field.

For crop growers with fields that have zones of high-density subsoils, the project should provide new information on the value of precision subsoiling.

“I think it will show the potential benefits of applying the subsoiling technique to soils and particularly to areas of a field where there is an issue with soil compaction from wheel traffic under very wet conditions or naturally occurring dense B horizons,” Schoenau says.

“I think it will give us insight into how subsoiling affects the properties of the soil and ultimately how that translates into any potential yield benefits and enhanced economic returns to the grower.” 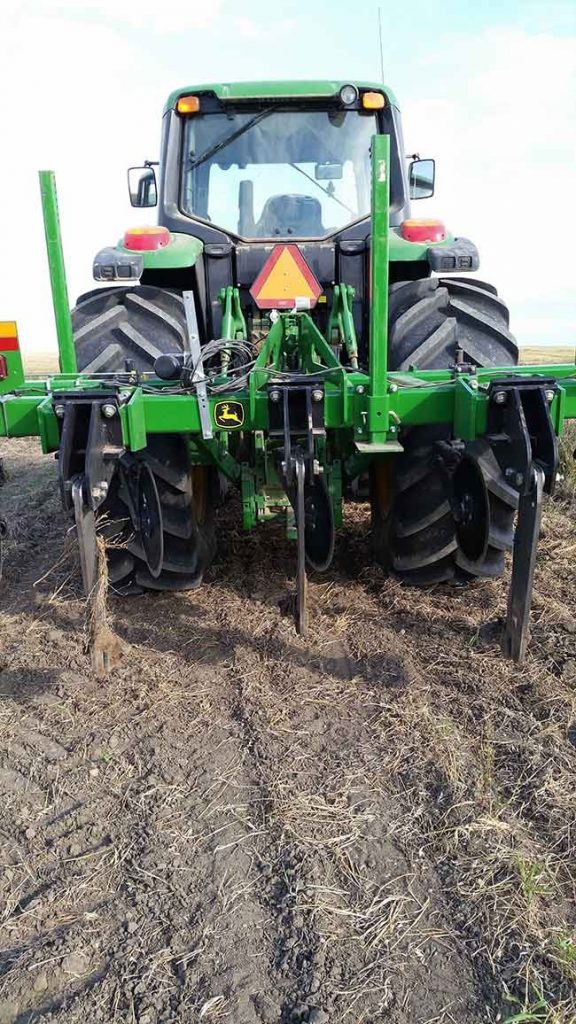 Researchers are evaluating precision subsoiling with a minimum till ripper. Dense