Features Agronomy Tillage
Taking the ‘pac’ out of compaction 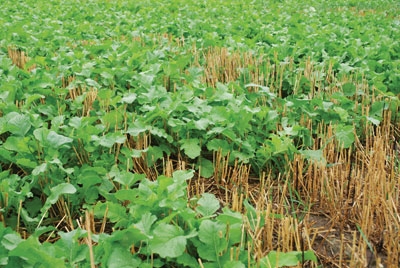 Although considered an option to red clover as the conventional cover crop A wet spring plus an anxious farmer is not a good combination.

A wet spring plus an anxious farmer is not a good combination. In order to get crops planted in a timely manner many growers went on the land far too early, which resulted in compaction problems. Although compaction often goes undetected, one bad year can spark renewed interest in the subject. To exacerbate the problem, the repercussions of compaction can be long term and, in those fields where it was a problem in 2011, it is certain to have an effect this fall and into spring 2012.

No soil type was spared compaction issues this year, according to the senior agronomist at Agris Co-operative in Chatham. “It’s important to wait for fields to be ready in spring,” explains Dale Cowan. “But, sometimes you have to go with what Mother Nature gives you and we have compaction issues now due to the wet spring.”

Cowan adds that some growers minimized the problem by reducing their axle loads or cutting back on the number of passes on the land. “These growers focused on planting and figured out other ways to apply fertilizer,” he says.

As a result, they are experiencing fewer issues due to compaction.

Cowan suggests that axle weight causes the most damage; however, if the weight and the number of passes can be reduced, along with use of radial tires and low air pressure, there may be some relief on the severity of soil compaction. “A six- to seven-ton axle should be the maximum,” he says.

Another cause of compaction this past spring, according to Ontario Ministry of Agriculture, Food and Rural Affairs (OMAFRA) corn specialist Greg Stewart, was spreading manure on wet ground. “Extra traffic on headlands can also result in compaction,” he adds. “These two situations may need some form of tillage to loosen the soil that may be compacted lower than the seed trench.”

Often compaction cannot be fixed with one tillage pass, says another agronomist, and may require a change in crop rotation to get deeper-rooted plants into the mix. “Corn has lost its bad reputation as a cause of compaction,” Colin Smith of UAP in Dorchester comments. “In fact, corn has a good root system for breaking up soil. Canola has a good root system to work on compaction as well.”

Alfalfa is another crop that will help break up compaction if it can be worked into a management system, adds Doug Aspinall. “Alfalfa will push down through the compacted layer,” the OMAFRA land resource specialist says. “If left for a few years, a strong rooted plant, such as alfalfa, will begin the process of restoring soil structure to the compacted layer.”

The compaction problems experienced in 2011 may not be at the stage at which long term recovery operations are necessary, but, left unchecked, they could cause problems down the road. “Maintaining soils continually will minimize compaction,” advises Aspinall. “Definitely keep an eye on your soil if it is wet.”

“The combination of heavy snow load, heavy rains in the spring and impatience to get on the land to plant crops contributed to the compaction problem this year,” says Smith. “Those who waited to seed aren’t having the issues that result from compaction.”

Deal with compaction on a field to field basis, he suggests. “In an ideal world if money isn’t a issue, tracked vehicles are better than wheels on soils to prevent compaction,” says Smith.

But, if wheels are what is on the vehicle, consider ways to reduce the impact, such as using some conventional tillage to create some fracture lines. In minimum till or no-till, try to break up the soil in places to create some fractures to allow soil recovery. “Certainly, fields that are in a good rotation with lots of organic matter may heal themselves over time from tillage or shallow compaction,” comments Cowan. “But, you first have to know how serious the problem is and then take appropriate action.”

Other management options
Attention has focused recently on using cover crops, such as tillage radish, to break up hard pans. It remains to be seen how effective this may be in alleviating deep compaction. “There are tools available to break up compaction,” adds Stewart, but rather than buying, a grower may want to rent or borrow if the compaction is minimal. “Identify how serious or deep your compaction goes. Is it six inches or seven or eight?”

He cautions about being too aggressive in loosening the soil because, if broken up too much, the soil may not be able to carry heavy loads in the spring and the compaction problem could increase.

Cowan says to determine how big the compaction problem is in the fall you need to take a shovel or probe to the field and dig down to find the layers and determine how many there are and the depth of the restriction, then decide on tillage depth to break the layers. Use yield maps, if you have them, to find poor yielding areas and use that spatial information to pinpoint where the compaction may be limiting yield.

Then, use those same maps to guide tillage operations in those areas only. “Find the areas that are problems and deal with them because the compaction might not be across the entire field,” advises Cowan. “At times, deep tilling a whole field may cause more issues than it solves.”

If compaction is identified, growers are encouraged to take steps to correct it. Reduce the load on the soil as much as possible even if it means having to do more than one pass to complete all your operations. Current use of RTK GPS guidance systems may offer the possibility to control traffic in the same spot and minimize the degree of tracking and confine compaction to a smaller area of the field. Taking action in the fall could make spring planting easier.


Related
Compaction: Is it really a problem?
Compaction: out of sight, out of mind
Video: Marla Riekman breaks down compaction and salinity problems
The physics of soil compaction