March 31, 2020
By Sponsored by Corteva Agriscience

Clubroot is one of the most devastating diseases of canola, capable of causing sharp declines in yield and quality and, if infestation levels are high enough, destroying an entire crop. More and more canola growers across Western Canada are now having to cope with clubroot as the number of farms infected with the crippling soilborne disease continues to rise in Western Canada.

Dan Orchard, an agronomy specialist with the Canola Council of Canada, says there are proven methods for preventing clubroot from taking hold in a field, as well as for keeping it under control once it’s there, but he stresses the key is to act early.

“Something that perhaps hasn’t been voiced loud enough, is the fact that [clubroot control] needs to be done proactively,” he explains. “Certainly, there are options that help manage clubroot quite successfully, but they need to be implemented earlier rather than later.”

Orchard notes growers who make a point of scouting their canola fields early and often will increase their chances of success.

“This allows you to potentially manage that first small patch that can appear in your field, by making sure that you’re not moving that [clubroot-infected] soil around, you’re reducing your tillage in that area, or you’re even putting it to a grass species for as long as you can so that equipment isn’t going through it and dragging soil out every year,” he says.

Orchard says another key to fighting clubroot is to use multiple strategies, offering up a cooking analogy to illustrate his point.

“Controlling clubroot needs to be a multi-pronged management approach,” he says. “We at the Canola Council suggest that it’s a recipe . . . if you leave something out of your recipe, you won’t achieve your desired result.

“So having a management recipe that would include utilizing resistant varieties early, using longer rotations with at least a two-year break between canola crops, controlling weeds that could be hosts as well as canola volunteers in non-canola years in your rotation, and not moving [clubroot-infected] soil around – these are really important things for growers to understand that they need to do all the time,” Orchard adds. 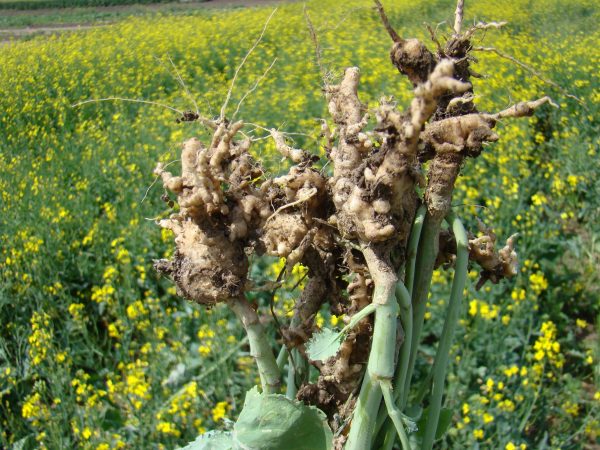 “We’ve seen this in the heart of clubroot country around the Edmonton area, where the farmers who have had success against clubroot have been following these steps on their own for years and years.”

Dan Stanton, who is a research scientist at Corteva Agriscience, believes combining clubroot-resistant canola hybrids with longer crop rotations will provide growers with a formidable defence against the disease.

“Preventing clubroot from establishing on your farm is the best strategy that there is, because when you start with zero spores in your field, there’s zero selection pressure against any canola hybrids that you’re growing,” Stanton says.

“Once the disease is established in a field, you’re going to have a large population of spores that will have diversity within it. Some of the diversity will include rare pathotypes that can infect canola hybrids with clubroot resistance,” he adds. “When there’s a three-year rotation or longer, more of the clubroot spores break down and there’s less selection pressure against the resistant hybrids.

“Generally, if you grow short rotations, the problem gets worse. If you grow longer rotations, it becomes a more manageable disease,” says Stanton. “If you’ve had a serious clubroot problem in one of your fields, then it’s a good idea to lengthen the rotation in that field. Then there’s more time for the spores to decrease.”

Orchard notes that tight crop rotations will also increase the likelihood of volunteer canola plants turning up that can increase clubroot spore loads.

“The longer you have your rotation, the less likely you’re going to have canola volunteers in your field,” he says. 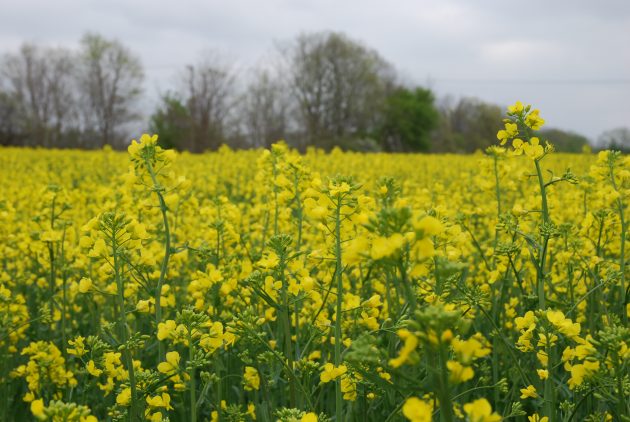 Orchard notes canola isn’t the only potential clubroot host in farmers’ fields, and that growers should also looking for weed hosts such as stinkweed, shepherd’s purse and wild mustard.

He says a good rule of thumb is to not wait beyond three weeks for controlling potential clubroot hosts with herbicide, since infected plants will start producing viable spores shortly after that.

Stanton agrees, noting that a pre-plant burndown can be effective way to eradicate any clubroot threats before they can begin propagating the disease. “Having a clean field is important,” he says.

Stanton notes that once clubroot is established in a canola field, it will start infecting plants when soil temperatures reach 14 C, which is typically around the May long weekend. For this reason, he says, an in-crop herbicide application in June can provide an added measure of control.

Orchard believes clubroot resistant hybrids offer the best defence against clubroot, particularly in fields with high spore loads or where canola has been grown in a tight rotation, but he cautions that they need to be used wisely.

“If you see any sign that hybrids with the original source of resistance aren’t working, then certainly it’s time to rotate to something new. There are a number of options for different sources of new resistance,” Orchard says.

Stanton agrees, noting it’s important for growers to rotate resistance frequently once clubroot is present in their canola fields.

“Even for those who haven’t had to deal with the disease, using hybrids with clubroot resistance is the key tool for prevention. It’s a good way to either prevent clubroot from becoming established in your field, or manage existing clubroot infestations proactively where you’re trying to keep spore loads low,” Stanton says.

Among the products that Stanton recommends as part of a comprehensive clubroot management program is the new B3010M canola hybrid offered by Brevant seeds.

“[B3010M] has a new single gene resistance that it is quite widely effective against the new virulent races,” he says. “It’s a top-end hybrid, so you don’t have to sacrifice anything to grow it and manage your clubroot.”