From the road, many fields look clean this time of year, but look closer. Weed seedlings are often present at high numbers, and these seedlings will only get bigger. Now is a good time to control them, especially as days and nights get warmer.

The cold factor. While spraying earlier is a benefit, consider the temperature. When spraying after a morning frost or near-frost event, herbicide activity could be next to zero. Biological activity would have stopped during the night, and will not start up again until the plant warmed to at least 5 C — and even then it would be very slow. A few hours between 5 C and a daytime peak of 10 C would not be enough warmth to get plant metabolism going to a point where herbicide was all that effective, especially on a cloudy day. No biological activity means no herbicide activity.

Glyphosate applications work better:
- When temperatures are greater than 10 C, with the expectation that daytime highs will increase to greater than 15 C
- When nighttime lows are greater than 5 C (the warmer the better up to 10 C)
- Under bright sunshine (thin or sporadic clouds are also OK). Applications made in darkness or heavy cloud are less effective
- With good quality water. Avoid water sources with hard water ions (Ca and Mg), iron, suspended clay or organic matter

Once weather conditions have warmed, go ahead and spray. Waiting for ideal conditions isn't a good strategy either. Early weed control with lower efficacy is generally preferable to no control at all or late control with higher efficacy — as long as weeds are present and not frost damaged. 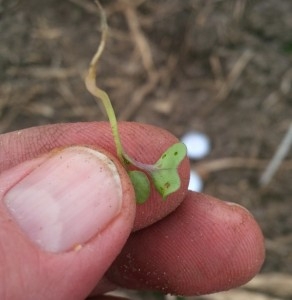 
Related
Swath timing: is close, close enough?
Manitoba harvest close to complete
Harvest close to wrapping up in Sask.
Up close and personal with blackleg