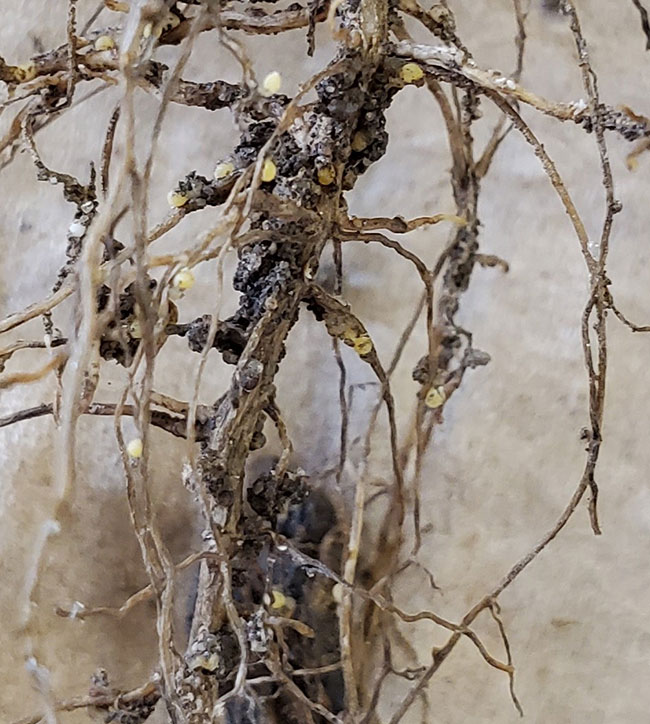 The small white cysts on this soybean root contain the eggs of the soybean cyst nematode. Photos courtesy of Samanfar Lab, AAFC.

Resistant soybean varieties are a critical tool for managing soybean cyst nematode (SCN). However, most of these varieties rely on a single resistance source. So, the threat of this major pest adapting and overcoming the resistance is very real.

This threat is spurring researchers towards new advances in SCN management. One of those researchers is Agriculture and Agri-Food Canada (AAFC) scientist Bahram Samanfar.

He and his research group in Ottawa are working to identify new, effective SCN resistance genes.

Soybean cyst nematode is a microscopic, soil-dwelling pest that feeds and reproduces on soybean roots. The nematode’s name comes from its pinhead-sized cysts on the plant’s roots. The cysts, which contain the nematode’s eggs, change from white to yellow to brown over time. Aboveground SCN symptoms include yellowing, stunted or dead plants in patches in a field.

This pest can cause yield losses of 80 per cent or more in susceptible soybean cultivars growing in highly infested fields.

Early signs of resistance breakdown
Genetic sources for SCN resistance are identified by the soybean line that was the original source of the resistance. Samanfar notes that the two main resistance sources used in soybean varieties are Plant Introduction (PI) 88788, which has been widely used for many years, and PI 548402, a variety known as Peking.

“Various seed companies have PI 88788 and Peking in their mix. PI 88788 still accounts for 90 to 95 per cent of the SCN-resistant soybean varieties available in Ontario and elsewhere,” says Albert Tenuta, field crop pathologist with the Ontario Ministry of Agriculture, Food and Rural Affairs (OMAFRA).

“PI 88788 has been very durable, and it’s still very effective in Ontario. However, we are starting to see some Ontario fields where PI 88788 is no longer as effective, where 50 or 60 per cent of the field’s SCN population can reproduce on those soybean plants. Yields in those fields are dropping from around 60 bushels per acre down into the 20s and low 30s.”

Tenuta outlines how the nematode gradually overcomes a resistance source. “Soybean cyst nematode in a field is not one uniform population. It’s a smorgasbord of what we call HG types, or what used to be called races. Some HG types can reproduce on a particular resistance source and others cannot.” Repeatedly growing the same SCN-resistant variety in a field leads to a gradual buildup of those HG types that can reproduce on that variety.

“The good news is that we are starting to see some other resistance sources coming into U.S. soybean varieties, such as Hartwig (PI 437654) and a newer source from Syngenta called PI 89772,” he says.

“We are anticipating the potential for some new sources in Ontario varieties as well.” For example, Milad Eskandari, a soybean breeder at the University of Guelph’s Ridgetown campus, has lines with Hartwig that are being evaluated in field trials.

Tenuta also underlines the value of the work by Samanfar’s group and others to identify new SCN resistance genes, especially because of the potential to stack resistance genes together in a soybean variety to achieve more durable resistance.

Promising progress
Soybean cyst nematode resistance genes are known as Rhg genes: “R” for resistance and “hg” for Heterodera glycines, the scientific name for the nematode. A soybean plant’s ability to resist different HG types depends on which particular alleles (variants) of which specific Rhg genes are present and how many copies of those genes are present.

“The resistance in current soybean varieties generally comes from two genes: Rhg1 and Rhg4,” notes Samanfar, a molecular geneticist and applied genomicist. PI 88788 contains rhg1-b, which is an allele of a recessive form of Rhg1. Peking contains rhg1-a, a different allele of Rhg1, and Rhg4.

The first phase of Samanfar’s project to find new candidate genes involved sifting through mountains of data on soybean-SCN interactions at the fundamental level of genes and their proteins. To do that, he and his research group used a bioinformatic tool called Protein-protein Interaction Prediction Engine, or PIPE.

“In a collaboration between Carleton University and AAFC, we developed a new version of PIPE to work with soybean and also to predict interactions between soybean and the nematode,” Samanfar says. “We have a massive amount of the data from that. Then we also added other databases available for soybean, such as functional genomics databases, single nucleotide polymorphism databases, and RNA sequencing databases.

“You might ask what is predicting protein-protein interactions going to give to you? Well, we use it for a concept called ‘guilt by association,’” he explains.

“My old supervisor always gives this example to explain the concept: Imagine you are trying to understand criminal activity in your community. You know the big head criminals, you know which neighbourhoods they live in, where they go – you know their patterns. Now imagine a new person comes to the community. You see that person in those same neighbourhoods, going to the same places, becoming friends with those big criminals. Then you can assume that person may be a criminal, too.

“We have used this ‘guilt by association’ concept to try to identify more SCN resistance genes. So, we know about Rhg1 and Rhg4, our big players. Then we ask: do we have any gene, any protein in our databases which follows the same routes, the same interactions and behaves exactly like Rhg1 and Rhg4?”

To find the answer to that question, Samanfar’s senior PhD student Nour Nissan, in collaboration with an expert coder from Carleton University (Eric Arezza from Jim Green’s research group), developed a new coding package. That package re-analyzed and re-filtered the enormous amount of data in all those huge databases.

The result was a new list of soybean genes of interest that likely have an important role in the host-pathogen interaction between soybean and SCN.

Next, the researchers examined the DNA of a diverse set of soybean lines to identify allelic variations in each of those genes of interest in the lines. Then, they tested those soybean lines against different HG types in the greenhouse and quantified the level of SCN resistance.

Those greenhouse tests have produced a shortlist of promising candidate genes that are probably effective SCN resistance genes.

Next steps
Within the next three years, Samanfar’s group will be conducting further tests using tools such as CRISPR to confirm which of those candidate genes are definitely effective SCN resistance genes.

As an example, he outlines how they plan to use CRISPR as a confirmational tool. “Let’s say we think the presence of gene A probably causes SCN resistance in a plant. If we use CRISPR to knock-out that gene and the resistance goes away, then that confirms the gene is playing a key role in the resistance.”

For each confirmed new resistance gene, Samanfar and his research group will create an allele-specific marker to identify the particular allelic variation of the gene that causes the resistance. The marker will allow breeding programs to very quickly screen many breeding lines to identify which offspring carry that specific allele.

Samanfar emphasizes that collaboration is key to this project. AAFC collaborators include Benjamin Mimee, a nematologist, and Elroy Cober, a soybean breeder. PIPE collaborators at Carleton University include Ashkan Golshani, Jim Green, Kevin Dick and Frank Dehne. Samanfar adds, “A lot of the achievements in this project would not have happened without the initiative and hard work of Nour Nissan.”

This project was funded in part through AAFC and Grain Farmers of Ontario (GFO), the province’s largest commodity organization.

Managing SCN
Once a field is infested with SCN, eradicating this pest is very tough. However, the nematode can be managed. Tenuta summarizes the main management strategies.

Tenuta adds, “Information about which resistance source is in an SCN-resistant variety is usually available either in the company’s literature or on the bag. But if not, always ask.

“Three: consider using an SCN seed treatment. These products can help slow down SCN reproduction. In our trials, we have seen anywhere from a 30 to 60 per cent reduction with some of the products, but they are not a ‘silver bullet’ and are best used in an integrated SCN management program.

“Four: include non-host crops in your crop rotation. When it comes to SCN, the main crops that are most at risk for us are soybeans and dry beans. Corn, wheat and other non-legume crops are good non-host crops. Maintaining them in your rotation, whether it’s a two- or three-year rotation, can help reduce SCN reproduction.”

Tenuta also advises regular scouting for the nematode, whether or not you already know that you have the pest.

“If you know you have SCN, you need to sample every four to six years to determine what your cyst levels are. If you see the levels increasing quite a bit, that would likely mean you’re starting to see adaptation to the PI 88788 source of resistance,” Tenuta notes. 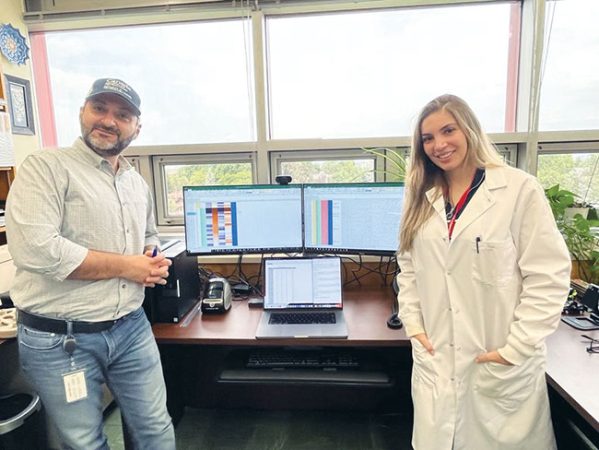 Reasons for optimism
Tenuta sees many promising trends in research and technology for SCN management.

“OMAFRA is also conducting a nematode survey across Ontario this year. If you want to know whether you have SCN and at what levels, you can contact me. We will analyze your samples for free with the help of the University of Guelph’s nematode lab. This survey is looking at nematodes in field crops and horticultural crops, not just SCN. It will give us a good baseline so we can prepare for nematode issues in corn and other crops, as well as soybeans.”

Tenuta also notes, “A couple of companies are reporting that they are close to potentially releasing transgenic soybean varieties against SCN. One such partnership was announced recently (June 2022), but it will still be many years until they are available to growers. There is also a lot of work on stacking available resistance genes into soybean varieties to help provide multiple levels of protection against SCN.”

Although substantial progress is being made when it comes to SCN resistance in soybeans, Samanfar says, “There are still a lot of gaps in our understanding of the interactions between soybean and soybean cyst nematode. Many factors play their roles: some of them we know, some of them we don’t. But we definitely need to keep working on this to help ensure effective, durable soybean cyst nematode resistance.”