There are both environmental and agronomic concerns surrounding the management of livestock manure. The major environmental concerns are: potential risk of nutrient accumulation in soil – particularly nitrogen (N) and phosphorus (P) – and risk of nutrient movement into surface or groundwater. Poor manure management can also cause accumulation of salts in soil, surface water or groundwater and pathogenic micro-organisms in surface water. 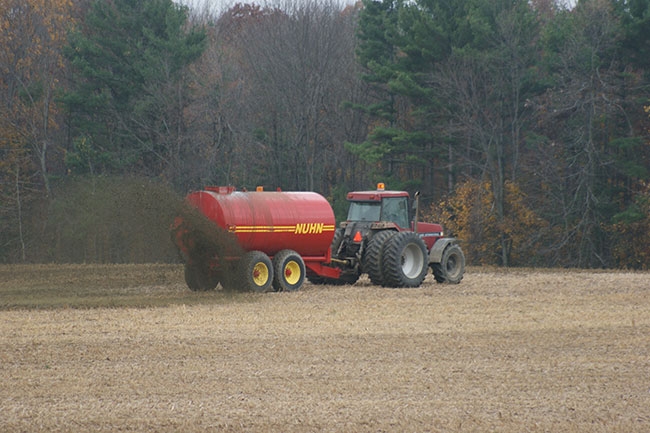 Poor manure management can cause accumulation of salts in soil There are both environmental and agronomic concerns surrounding the management of livestock manure.

The major agronomic concerns include: over application of N in manure, which can increase crop disease pressure and cause crop lodging, yield loss and reduced crop quality. Excessive levels of one or more nutrients in soil may cause toxicity and nutrient imbalance issues with crops, which leads to a reduction in crop yield and affects soil fertility. Over time, excessive manure can increase potassium (K) levels in soil, which can negatively affect soil physical quality and increase soil salt levels. Accumulation of salts in soil may reduce crop yield potential.

Feedlot manure study
A study by Barry Olson with Alberta Agriculture and Forestry and other researchers examined manure application on irrigated medium- and coarse-textured soils in southern Alberta.

The researchers also found the added salts from the manure caused soil salinity to increase and the dominant extractable cation to shift from calcium to potassium. The application of manure increased soil sodicity, which may result in degradation of soil structure in the long term.

Net P accumulation from manure in the zero to 0.15-m soil layer increased by 64 kilograms per hectare (kg/ha) for the 20 tonne per hectare (t/ha) manure rate and 730 kg/ha for the 120 t/ha manure rate at the coarse-textured site after eight years of manure application. Corresponding net increases at the medium-textured site were 131 and 1,127 kg/ha respectively. The extractable orthophosphate-P status in the zero to 0.15 m soil layer at the end of the study was well above the agronomic requirements for crops, even for the 20 t/ha/year rate.

Repeated application of manure, particularly at high annual rates of 60 to 120 t/ha/yr significantly affected soil and groundwater quality, with a build-up of nutrients in soil and the movement of nitrate and chloride into groundwater. Soil texture affected the distribution and movement of excess nutrients derived from manure.

Soil phosphorus study
Given the concerns of P accumulation in soil and potential for surface water contamination, Alberta Agriculture conducted a soil P research project that drew a number of interesting conclusions. Surface waters in Alberta are extremely sensitive to further P enrichment and there is a direct, linear relationship between soil-test P levels and the P concentration in runoff water in the agricultural areas of Alberta. As the amount of P in the upper soil profile increases, so does the concentration of P in runoff water. This relationship holds true regardless of whether the soil P is from non-manured or manured soil.

Also, a direct relationship was found between soil test P levels and the P in simulated rainfall runoff from freshly applied manure and one year after manure application, although values of both variables decreased with time. Soil-test P limits were determined for all agricultural land in Alberta. Using a hypothetical total P runoff water quality limit of one part per million (ppm) resulted in soil-test P limits in the zero to 15 cm layer that were:

If soil-test P limits are applied to confined feeding operations in Alberta, a substantial increase in the amount of land will be required for spreading manure. Transportation and spreading costs may increase by 24 to 128 per cent depending on the average increase in distance that the manure needs to be hauled.

Sustainable manure management in Alberta is essentially a transportation issue. There is more than enough cultivated land available to agronomically handle all the manure generated by the confined feeding industry and this land would benefit from the additional nutrients and organic matter contained in manure. However, there are often large distances between the receiving land and the confined feeding operations, which can pose a significant financial burden to livestock operators.

While soil-test P limits will increase manure-handling costs for all confined feeding operations, the most significant concerns will occur in geographic areas of the province with large livestock concentrations. Much of the existing land base in these areas already has high soil P levels and new land with no manure is not available within a reasonable distance. Long-distance manure transportation or development of alternative management (composting) or uses (bio-energy) will have to be considered.

It is virtually impossible to apply manure to meet the exact crop requirements for all nutrients. When manure is applied based on one nutrient, other nutrients are either over or under applied. Nutrients in manure such as N and P are contained in various available and unavailable forms. The unavailable organic forms break down and release at different rates over a period of months and years.

When manure is applied to meet the N requirements of a cereal crop, P will be applied at approximately three to six times the rate of crop removal, depending on the P manure source and content. Repeated manure applications over a period of years will result in a build-up of soil P levels that are not desirable from environmental or agronomic standpoints. Most livestock producers in Western Canada have applied manure based on N content, leading to a build-up of soil P. From an environmental standpoint, as surface soil P levels increase, P in runoff water will increase surface water contamination. From an agronomic standpoint, very high soil P levels are often accompanied by high soil K and salt accumulation in soil. The cumulative effects of high soil P, K and salts will reduce soil quality and crop production.

For long-term sustainability of the soil and the environment, it is advisable to use P as the nutrient to match with crop removal rather than N. For existing operations, this approach will likely mean the need to expand land bases or work with adjacent farms to wisely utilize all the manure produced by the intensive livestock operation. In addition, commercial N fertilizer may have to be used to make up the difference between what the crops require and what is contained in the manure.

Legislation
To date, only the province of Manitoba has developed legislation to control maximum soil P levels in agricultural soils. The provinces of Alberta and Manitoba have legislated guidelines to restrict manure application based on soil test nitrate-N. In Alberta, the soil nitrate-N limits are set according to soil groups, soil textures, depth of the water table and whether land is in dryland or irrigated crop production (Table 1). [Click on gallery and expand to view tables.] Presently, Alberta does not have legislated guidelines for soil P level or on any other nutrients.

In Manitoba, legislated soil test nitrate-N restrictions are based on Agricultural Land Classification (Table 2). Only Manitoba has legislation guidelines to restrict manure application based on soil test P (Table 3). At this time, Saskatchewan does not have any legislation to control or restrict manure application based on soil N or P or any other nutrient levels.

However, when proper manure management practices are followed, livestock waste can be utilized as a valuable nutrient resource rather than viewed as a waste product. Manure is an excellent fertilizer resource and can physically benefit the soil by adding organic matter, which improves soil tilth and structure.

Poor manure management can cause accumulation of salts in soil

Manure management planning
Alberta Agriculture has developed an excellent book called “Nutrient Management Planning Guide” to assist producers with manure management. This booklet is a solid example of extension information available for planning individual manure management and to optimize crop production. It is available online and can be downloaded at bit.ly/2obQejo.

Although the planning process seems like a daunting exercise, it goes through a detailed step by step investigation and planning process. This process is essential in planning individual manure management and to optimize crop production.

To make the planning and calculation process simple, computer programs have been modified and developed. Alberta Agriculture has developed Manure Management Planner (MMP), which is a modified program originally developed by Purdue University and available online at bit.ly/2otGNrx.