Group 1 wild oat resistance has been confirmed in 41 per cent of fields – the numbers keep growing, and herbicide resistance has become a fact of life for many Prairie farmers. Herbicide-resistant weed surveys and monitoring from 2007 to 2011 led by weed scientist Hugh Beckie of Agriculture and Agri-Food Canada (AAFC) at Saskatoon, Sask., with support from the Saskatchewan Ministry of Agriculture, shows the extent of the problem. Ever since herbicide resistance was confirmed on the Prairies in 1988, more resistant weeds at more locations are being found. Beckie compared the most recent survey information to baseline surveys done in Alberta in 2001, Manitoba in 2002 and Saskatchewan in 2003.

“The numbers continue to grow, and that isn’t a surprise. The Prairie experience pretty much follows the Australian experience where farmers use one herbicide until it is no longer effective, and then switch to another herbicide,” says Beckie.

In the last herbicide resistance survey in Alberta in 2007, Manitoba in 2008 and Saskatchewan in 2009, 1,000 randomly selected annually cropped fields were surveyed to see how weed resistance had changed. Between 2007 and 2011, another 1,091 weed seed samples (each sample from one field) submitted by Prairie growers were screened.

Based on the surveys, Beckie estimated that 29 per cent of total annually cropped land on the Prairies are infested with herbicide-resistant weeds covering a total field area of 9.9 million hectares, 37 per cent of all cropped land. The actual area infested with herbicide resistant weeds has increased eight times, while the total field area affected has doubled (see Table 1).

Within Group 1, there are three chemical families commonly called the fops, dims and dens. The cross-resistance of wild oats to these three classes did not show a significant difference in resistance frequency.

Group 2 herbicide-resistant wild oat was found in 12 per cent of fields, up slightly from eight per cent in 2001-03. Beckie explains that the lower incidence of Group 2 versus Group 1 wild oat resistance reflects the past relative usage of the wild oat herbicides.

Wild oat resistant to both Group 1 and Group 2 herbicides was at eight per cent, compared to three per cent in the previous survey.

Group 8 (e.g., Avadex, Avenge) herbicide-resistant wild oat was identified in only eight per cent of fields, and was not previously screened for.

Additionally, from samples submitted by growers, six populations of Group 1 herbicide-resistant Persian darnel have been identified in southern Alberta and Saskatchewan.

Group 2 broadleaf resistance rapidly increasing
Across the Prairies, all kochia populations are now presumed to be Group 2 resistant, as found in a spring 2007 survey. Group 2 spiny sowthistle resistance was also confirmed in all Alberta fields sampled, up from 67 per cent in 2001. Group 9- (glyphosate-) resistant kochia has since been confirmed in southern Alberta and Saskatchewan, and the biotypes were also Group 2 resistant.

Group 2-resistant common chickweed was found mainly in Alberta in 40 per cent of fields, up from 17 per cent in 2001. “The incidence of Group 2 resistance in this weed has increased rapidly over six years,” says Beckie.

Beckie says past weed surveys have shown that cleavers are increasing in abundance at the fastest rate of all weeds, and that restricted weed control options in field peas is challenging growers, especially if the cleavers biotype is Group 2-resistant.

No sampled weed populations across the Prairies were found to be resistant to herbicides from Group 4 (synthetic auxins) or Group 10 (glufosinate). Beckie was surprised at the lack of Group 4 resistance in broadleaf weeds. The herbicide group, which includes 2,4-D has a long history of use with 56 confirmed resistant biotypes in 31 different weeds around the world.

However, just because the survey didn’t pick up Group 4-resistant biotypes on the Prairies doesn’t mean they aren’t there. According to an international database maintained by Ian Heap at weedscience.org, weeds confirmed with Group 4 resistance include common hempnettle in Alberta (1998), false cleavers in Alberta in 1996 (with Group 2 + 4 resistance), and wild mustard in Manitoba in 1990.

The good news in the survey is the lack of Group 10 resistance confirmed. This Group includes glufosinate-ammonium, the active ingredient in Liberty herbicide, which is used in Liberty Link canola.

“Herbicide-tolerant canola has likely extended the useful life of Group 1 and Group 2 wild oat herbicides, as glyphosate and glufosinate have provided different modes of action that farmers could use on wild oats in canola,” says Beckie. “With shorter canola rotations, though, this is putting greater selection pressure on these two herbicides, so growers are going to have to be careful with their herbicide rotations to avoid resistance to these herbicides groups.” 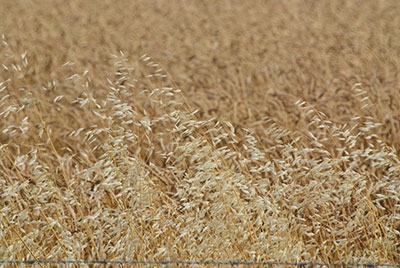