An intriguing discovery opens the way to developing another tool for fighting this devastating soybean disease. 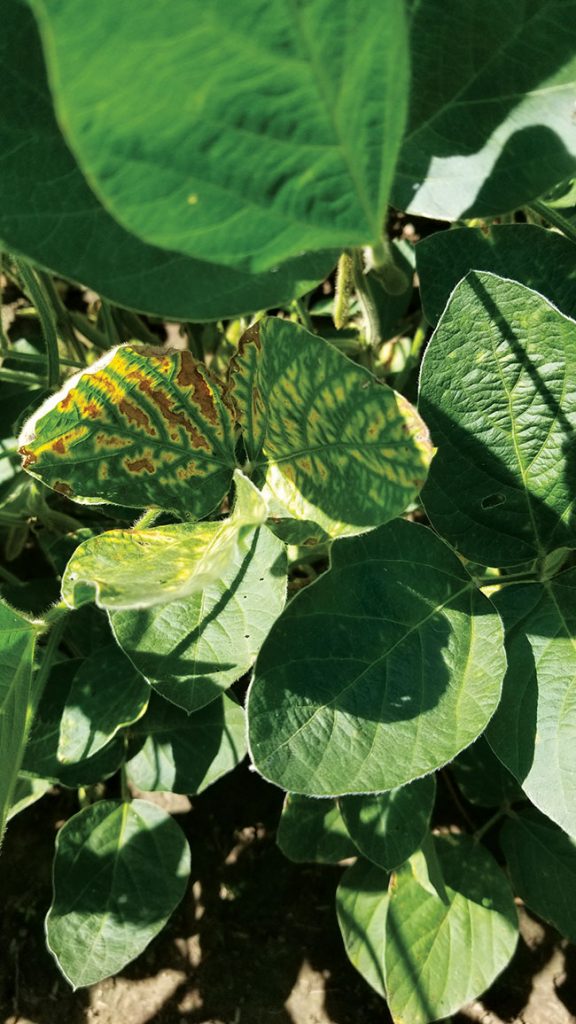 Toxins produced by the SDS pathogen cause the leaves to turn yellow between the veins. Photos courtesy of Owen Wally.

With a dash of serendipity mixed into their scientific studies, researchers at Agriculture and Agri-Food Canada (AAFC) in Harrow, Ont., have made a fascinating discovery: a field with soil that naturally suppresses soybean sudden death syndrome (SDS).

This discovery could be the first step toward adding a new tool to the small toolbox available for managing this yield-limiting disease.

“Sudden death syndrome is caused by Fusarium virguliforme, a soil-borne fungus. It seems to colonize the roots of soybean plants shortly after the seeds germinate and causes root rot. Then, if the environmental conditions are favourable, the pathogen starts to produce toxins,” explains Owen Wally, the crop pathologist who is leading this research.

“The toxins get translocated up the vascular tissue to the leaves. The leaves react to the toxin and start to turn yellow, giving the leaves that characteristic SDS symptom of yellowing between the veins, which we call interveinal chlorosis. As the disease progresses, the chlorosis turns to necrosis and can eventually lead to the death of the entire plant.”

He notes, “You will often see yield losses in excess of 25 per cent due to the disease, and it can cause close to 100 per cent losses when it is very severe.”

According to Wally, SDS is favoured by high moisture conditions throughout the growing season. In addition, it likes cooler temperatures at planting for increased root colonization, but then it needs warmer temperatures for the production of toxins and symptom development.

SDS is a fairly recent invader of Ontario soybean fields. Symptoms of the disease were first noticed in 1993 in Chatham-Kent. The first formal identification was in 1998, based on testing of samples collected in 1996, which confirmed the presence of SDS in Essex, Chatham-Kent and Lambton counties.

Since then, the disease has continued to spread. Wally has been working with Albert Tenuta at the Ontario Ministry of Agriculture, Food and Rural Affairs on SDS surveys in Ontario. Those surveys show the disease is now also in Elgin, Norfolk, Middlesex, Oxford and Perth counties.

These days, SDS is one of the most important soybean diseases in southwestern Ontario.

“We’ve found that sudden death syndrome seems to be getting progressively worse in a lot of locations, particularly in the south. Over about the last 10 years, more and more areas seem to be getting hit with it a little harder each year,” Wally notes.

“In some areas, particularly around western Elgin County, growers have decided not to grow soybeans anymore because they can’t get enough yield from the crop due to the disease.” 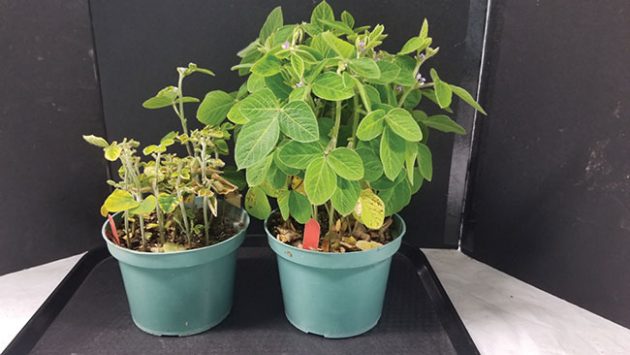 Luck plus science
The discovery of the SDS-suppressive soil had its beginning two decades ago. “In the late 1990s and early 2000s, my predecessor at Harrow, Terry Anderson, was starting to work on sudden death syndrome. He happened to find a field about a kilometre south of the Harrow research station with high levels of the disease. Because of the high SDS levels and the logistically convenient location, they decided to use the field for screening soybean lines and varieties for response to the disease. As a result, soybeans have been grown continuously in that field for about the past 20 years,” Wally explains.

“However, Terry noticed the SDS levels in the field were getting progressively lower over time. By the time I started with AAFC in 2015, we weren’t seeing a lot of SDS symptoms in the field. But we didn’t have a really good explanation for why the SDS levels were declining.

“It wasn’t until we started to do some indoor testing with the soil from that field that we discovered the soil had the capacity to suppress sudden death syndrome.”

Wally explains that this discovery actually happened by accident. He and his research group were working on a greenhouse SDS study at the time. Their idea was to use field soil containing the pathogen, rather than their regular potting soil, as a way to increase the level of SDS symptoms in their greenhouse plants for their bioassays.

So, in their initial experiment, they used soil samples from that field near Harrow. They autoclaved some of the samples to sterilize the soil, killing all the microbes, and left the rest of the samples unsterilized. Then they inoculated the sterilized and unsterilized samples with Fusarium virguliforme, and planted their soybean varieties in the samples.

They had expected to see more SDS symptoms in the soybeans grown in the unsterilized-plus-inoculated field soil. To their surprise, the opposite was true.

Somehow, one or more of the microbial species in that field near Harrow were able to suppress SDS.

To try to understand what was going on, Wally’s research group then conducted the same autoclaved versus non-autoclaved tests on soil samples from other fields in the region. But only the soil from that one field near Harrow produced the surprising result.

Additional tests with that soil confirmed that it had a strong ability to suppress SDS. Wally says, “Using even a small amount of the live, non-autoclaved soil could shut down the formation of sudden death syndrome.” 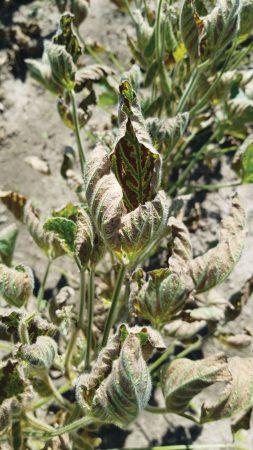 “We figured that this soil’s ability to suppress the pathogen developed because it has been in continuous monoculture soybean production for so long,” Wally explains.

“Other research has been done on other pathogens in situations where the same crop is grown continually; examples include Rhizoctonia in wheat and cauliflower, take-all in wheat, and soybean cyst nematode in soybean, among others. Those studies show that in crop monocultures, the soil microbial community can naturally evolve to become antagonistic or suppressive to the pathogen.”

You can imagine how that might happen. A pathogen’s population gets higher and higher over time in the ongoing presence of susceptible hosts and favourable environmental conditions. But along with that, the populations of microbes that parasitize or prey on that pathogen may also get higher and higher because they have more and more ‘food’ to eat. And sometimes those microbes may become so effective at attacking the pathogen that it is no longer a threat to the crop.

Wally recognized that the SDS-suppressive soil might offer a path towards developing a new tool for fighting SDS. So he and his research group have set up a field experiment to try to
answer some key questions: How did this suppressiveness develop? How long does the suppressiveness last if the soil is rotated out of continuous soybeans? Which particular soil organisms are involved in suppressing SDS? And is there a way to encourage that suppression in other fields to help protect soybeans against SDS?

They have split the SDS-suppressive field into three sections. The centre section is still in continuous soybean production, and the two sections on either side are in a corn-soybean rotation, a common rotation in this region. For comparison, they have also set up the same experiment in two non-SDS-suppressive fields, one in Elgin County and one in Chatham-Kent.

They conducted these field trials in 2019 and 2020 and will be continuing them in 2021. The trials involve measuring key parameters like soybean yields and SDS levels. They also collect soil samples for greenhouse bioassays to see if soybean plants will develop SDS when grown in the soils.

As well, they are sequencing the DNA in the soil samples so they can track how the soil microbial community differs from section to section, field to field, and year to year. Although they haven’t been able to conduct much of the project’s lab work yet due to COVID restrictions, they hope to get back into that in 2021.

For the first two years, the project was funded through AAFC and the Canadian Agricultural Partnership by tacking the work onto some other soybean research. Beginning in April 2021, Grain Farmers of Ontario will provide funding so the project can continue for three more years.

“Within the next three years, we hope to get at least a pretty good indication of what organisms or groups of organisms may be causing the suppressiveness,” Wally says.

“If we find some promising candidate microbes within the next two years, we plan to do some initial chemical or biochemical assays on those organisms to see if we can mimic the SDS suppression in the lab. We hope to apply the microbes as a seed treatment or soil amendment, or perhaps to add some kind of organic amendment or something to the soil that encourages those organisms to become more prevalent.”

Looking ahead, he says, “If we could find a management practice/biocontrol practice that is good enough at controlling sudden death syndrome, then we could keep the disease down to a certain level. We might be able to combine this practice with soybean varieties that have fairly good tolerance to SDS. That might allow growers to continue to produce soybeans in areas that are very high risk for the disease.

“We might also be able to help maintain soybean yields in some areas that currently have low SDS levels and to slow the spread of the disease further into Ontario.”

Wally concludes, “It’s a pretty exciting opportunity. Our goal is to maintain or increase the economic sustainability and environmental sustainability of soybean production. We hope to get the best of both worlds by being able to modulate the soil microbiome to help control sudden death syndrome.”