Improving cold tolerance and winter hardiness of cereal crops for the Prairies continues to be a priority for plant breeders. Although advancements have been made over the years, breeders are still looking to solve this complex and challenging puzzle. The goal of developing super hardy winter wheat is attainable, but accomplishing it is not going to happen easily.

“The short answer is yes, developing super hardy winter wheat is possible,” says Dr. Brian Fowler, professor in the department of plant sciences at the University of Saskatchewan. “We have evidence with winter rye, which is a very close relative and has genetic systems that are not much different from wheat. However, we continue to be challenged with trying to move cold hardiness genes from one species to another.”

Triticale is an example of a successful hybrid developed by crossing wheat and rye. Fowler explains that moving the genes to develop hybrids is not that difficult, except for traits such as cold hardiness. So far, the triticale hybrids developed always express the cold hardiness of the wheat parent, while the rye parent cold hardiness genes remain completely suppressed. Breeders continue to look for tools and solutions to get the rye cold hardiness genes expressed in their selections.

“We have tried different approaches over the years using more conventional technology and have identified the major genes and their location,” explains Fowler. “The cold hardiness genes are located on the long arm of chromosome 5A in wheat and 5R in rye. We have tried various strategies including substituting the complete 5R chromosome into wheat, but have been unable to get the rye cold hardiness expression. The similarity of genetic systems suggests that the differences in the cold-hardiness potential of species is due to differences in gene regulation rather than the presence or absence of cold hardiness genes.”

“Molecular technologies are advancing rapidly and are helping us to find some answers,” says Fowler. “However, wheat is complex because it is a hexaploid and has three genomes that are closely related, making it difficult for molecular sequencing programs to differentiate between the three genomes. There is still a lot of difficulty in this process and is not something that is going to happen easily.”

Winter and spring wheat types have different strategies for acclimating to cold temperatures. Some of the very cold hardy winter varieties such as rye can start to cold acclimate once temperatures begin to fall below about 18 C, while hardy winter wheat starts at 15 C. Spring types also have an acclimation system that responds to low and sudden drops in temperature, however they do not activate at as warm a temperature. For example, some tender spring barley types won’t begin to acclimate until temperatures fall below 5 C, which isn’t always quick enough to respond if early growing season frost occurs.

“Breeders have been working on this challenge for many years, and although our understanding has increased and molecular technologies have improved considerably, we still don’t know what the best approach is,” says Fowler. “These new molecular technologies are quite complex and specialized, and the expertise is located in different places. We are working with other researchers at the University of Saskatchewan, the National Research Council, USDA, the University of Quebec and companies from Europe to advance our understanding of these complex systems. There is no silver bullet, but we expect over the long term to be able to achieve our goal of developing super winter hardy wheat varieties and other cereals such as barley.” 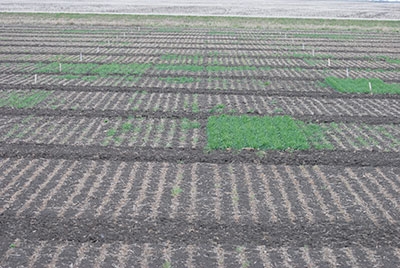 The winter survival of Puma rye (two plots that are very green) was superior to other less hardy cereals. Photo taken May 20 Improving cold tolerance and winter hardiness of cereal crops for the Prairies continues to be a priority for plant breeders.