Sunflower hybrids designed for the Canadian Prairies are nearing commercialization. 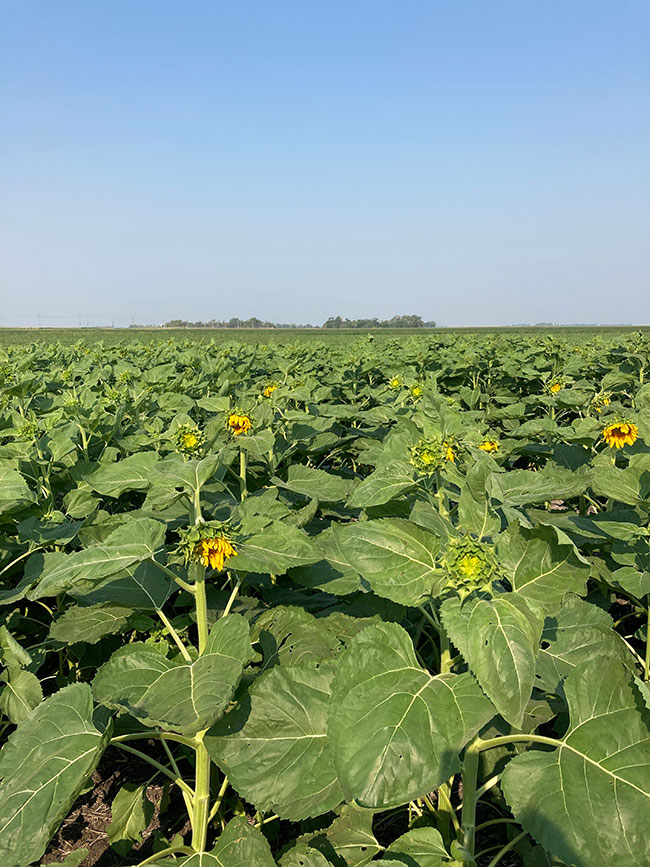 Some early experimental hybrids at 51 days after planting at the Fargo nursery in North Dakota. Photo courtesy of MCA Sunflower Breeder.

As the only sunflower breeding program in Canada, the Manitoba Crop Alliance’s program is key to the long-term success of the country’s sunflower production. This program is just 10 years old, but it already has some very promising hybrids, including one that is nearing the final stage of pre-commercial field testing.

The program targets sunflowers for the confection seed market – the in-shell snack market. The aim is to develop hybrids that have a production advantage for Prairie growing conditions and a seed quality advantage in domestic and international markets.

“At present, the sunflower varieties available to Canadian producers are all sourced from the United States. All those genetics were bred and developed in the U.S. for U.S. growing conditions and needs,” explains Darcelle Graham, chief operating officer of the Manitoba Crop Alliance (MCA).

“In fact, one of the top confection varieties that Canadian producers are still growing today is 30-plus years old. You wouldn’t see that with other crop types. Canada has new canola hybrids, new wheat varieties, new corn hybrids coming along all the time; their genetics are continually being improved.

“So, one of the reasons why the sunflower breeding program was identified as a strategic priority was the need for new genetic opportunities for sunflower producers in Canada. The program’s overall objective is to increase the profitability of growing sunflowers for Canadian producers.”

Before the National Sunflower Association of Canada (NSAC) and four other Manitoba commodity groups amalgamated to form the MCA in 2020, Graham was NSAC’s executive director. She notes, “Manitoba has 90 per cent of the sunflower acres in Canada, so our breeding program is focusing on Manitoba for now. Once we have a commercially ready hybrid for Manitoba, we will look at expanding the field testing to Saskatchewan and Alberta. We’re hoping that our hybrids will be a good fit for those provinces, too.”

Over the decade since the breeding program started, it has received funding from various sources. Currently, it is funded by
Agriculture and Agri-Food Canada and the Canadian Agricultural Partnership (CAP) under the Diverse Field Crops Cluster, the Manitoba Government under the CAP Ag Action Manitoba program, Western Grains Research Foundation and levy dollars from MCA sunflower growers.

Seeking the best of the best
Mike Hagen has been the program’s sunflower breeder right from the beginning. Graham says, “We didn’t have any sunflower breeders per se in Canada with the required knowledge and expertise, so we looked stateside. Mike has considerable expertise and experience with sunflower breeding, and he brought in some of the initial parental lines for our program. Also, Mike is based in Fargo, North Dakota, which is a hub for sunflower research, including the USDA breeding program. And we have been able to bring certain traits from the USDA program, such as disease resistance traits, into our breeding program.”

“Hybrids are made by crossing parent lines, so as a breeder, about 90 per cent of my job is developing the best elite parent lines that I can,” Hagen explains. “It takes about four to six years to develop a new parent line. You keep on eliminating and eliminating and narrowing it down to the very best lines based on how well they perform in crosses with other parent lines and the quality of the experimental hybrids that I can get from them.”

This breeding work is conducted at the program’s summer and winter breeding nurseries. The summer nursery, running from May to October, is just outside of Fargo, and the contra-season, or winter, nursery is in Chile and operates from November to April. “Having the contra-season nursery allows us to advance our materials at an accelerated rate; essentially it doubles the rate of hybrid advancement,” Graham notes.

The hybrids are evaluated at various Manitoba locations in a series of trials. The seed for these trials is produced at the winter nursery.

“This winter nursery/summer nursery system works quite well,” Hagen says. “In the summer, we get to see the performance of the different hybrids, and I get to evaluate my inbred lines again before we send the seed to Chile. And based on all those observations, we can improve or fine-tune the winter nursery, so we can get a higher quality field of experimental hybrids for the following summer.”

Each year, they test 132 new experimental hybrids at two Manitoba locations; usually one is in the Elm Creek area and the other in the Holland area.

Out of those 132 experimentals, they advance the best ones to the variety performance trials (VPTs) in the following year; in 2020, they advanced 12 out of the 132 hybrids.

The VPTs take place at multiple Manitoba locations each year. These replicated plot trials compare the advanced hybrids with the commercial varieties currently being grown in Manitoba.

The best lines from the VPTs go to pre-commercial strip trials at two to four locations. The strip trials are conducted in commercial fields by sunflower grower members of the MCA, using the grower’s field equipment and production practices. The strips are at least eight rows wide and 1,000 feet long.

The pre-commercial pilot trials are the final stage of testing. These larger scale trials involve perhaps 40 or 50 acres and are conducted by MCA sunflower grower members using their own equipment and practices. 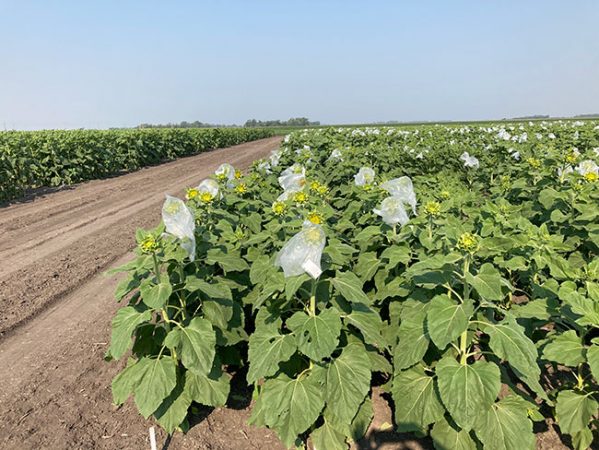 The parent lines are developed at the Fargo nursery. Photo courtesy of MCA Sunflower Breeder.

To advance through the Manitoba testing process, a hybrid’s yield must be as good as or better than yields of the current commercial varieties. The hybrid’s days to maturity must be equal to or shorter than the maturity of the current commercial varieties. And the hybrid must be able to withstand strong winds and driving rain without falling over. To further help with standability, Hagen also breeds for medium to short plant height.

Through Hagen’s breeding work, all the parent lines now in the program are tolerant to the herbicide Express, which means that all hybrids produced are Express-tolerant – another competitive advantage for growers. He notes, “This is a non-GMO herbicide resistance trait – a natural resistance that was found in nature.”

The breeding program is also making good progress on disease resistance. “I’m working with some dominant genes for resistance to downy mildew and rust, and trying to incorporate those into all the new experimental hybrids that we test every year in Canada,” Hagen says. “About 90 per cent of the experimentals that we’re testing this year in Canada have a gene for resistance to downy mildew and about half of those 90 per cent also have a resistance gene for rust.”

Traits that meet market needs
“Another piece to this program is ensuring that we keep in contact with our processors and buyers [so we understand what their needs are],” Graham says. “For example, pre-COVID, we would invite them out to see our hybrids as they are growing here in Manitoba, and we would share with them samples of the harvested seeds because there are some nuances with confectionary sunflower seed characteristics.”

Some of those nuances relate to seed shape. “We breed for a long-type seed,” Hagen explains. “It is not really long, but it is longer than the industry standard that is grown in Canada at present, which is more of a round-type. And we also want the shoulder, or base of the seed, to be wide.” A longer seed with a wide shoulder is a shape that appeals to both domestic and international markets.

In addition, the hull colour has to be visually appealing to consumers. “There is very little processing when it comes to confectionary sunflower seeds,” Graham says. “They get harvested, cleaned to remove harvest debris, and sized. Then they are roasted in the shell and put into a bag.”

Hagen breeds for hulls with a striking colour combination: a solid dark grey and ideally just a single, clean white stripe around the outside edge of the hull.

“We also want a good test weight, which means we want a lot of nut meat in those seeds,” he says. “When we select hybrids for advancement, we try to get 55 per cent or higher nut meat (or about 45 per cent or less hull). Last year, the hybrids that we advanced were in the range of 55 to 62 per cent nut meat.” 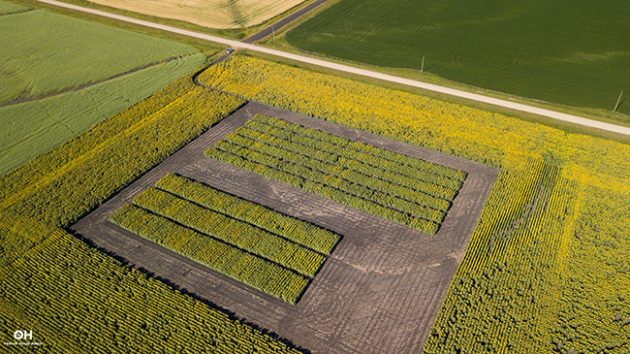 The MCA program evaluates the hybrids at various Manitoba locations in a series of
trials, starting with the new experimental hybrids, shown here at Elm Creek in 2020.
Photo courtesy of Manitoba Crop Alliance.

High yields, high quality, high hopes
“Our breeder and our team are very excited with the results we’re getting. We’re hoping to meet our goal of having a commercially viable hybrid by the end of this project cycle, which is March 31, 2023,” Graham says.

On top of that, Hagen’s breeding pipeline now has several experimentals that look like they have the potential to be commercialized in the coming years.

“We’re pretty happy with the progress that we’ve made. You have to wait a long time and do a lot of work to get to this point, but it’s finally starting to come to fruition,” Hagen says. “We’ll get another year under our belt, and then I’m hoping that we can get something in pre-commercial pilot trials.”

He adds, “We are in talks with third parties that are interested in looking at commercializing a hybrid from our program.” So stay tuned – a commercialized sunflower hybrid that’s tailor-made for Manitoba could be on the way.