Oct. 10, 2014 - Climatic conditions were not favourable to crop growth or insect activity in Saskatchewan, particularly in April and May of 2014. Many areas experienced below normal temperatures and higher than normal precipitation. Various insect infestations were reported across Saskatchewan during the growing season; some at economic levels, but overall insect pressure was generally lower than most years.

After a three-year decline in numbers, there was an apparent resurgence in cutworm populations across the province. Though not as severe as in recent years, insecticide application was required in many cases and there were reported estimates in excess of 30 acres in some fields. Currently there are no reliable predictive methods to estimate risk from cutworms for 2015. Although cutworms often tend to do better in warm, dry conditions, this generalization is not relative to all species. Several Saskatchewan samples of cutworms were submitted as part of the ongoing research on this insect. The intentions of the projects are to provide better understanding of species (including identification, differences in biology and naturally occurring parasites) for future management considerations.

The cabbage seedpod weevil was at economic levels from the Alberta border to areas near Indian Head in southern Saskatchewan. Significant infestations were also noted north to Kindersley in the West Central Region east to Outlook. This pest continues to be of concern as its range expands into eastern regions of the province toward Manitoba.

The 2014 pea leaf weevil survey suggested lower levels of this pest compared to 2013. Damage is still noted primarily in the southwest part of Saskatchewan although some feeding was noted on pea in a few fields near Kyle, north of the South Saskatchewan River in 2013.

Diamondback moth and bertha armyworm moths were monitored with pheromone traps during the growing season. Data from Environment Canada did not indicate any early wind trajectories favourable to bringing in diamondback moths from southern locales. Pheromone traps picked up moths throughout the monitoring period in southern Saskatchewan into mid-July but no significant populations were reported in the province.

Bertha armyworm populations continued to decline in 2014. Insecticide application was reported in a few areas, primarily in southern regions. This insect is thought to be in the downward trend in its cycle and of lesser risk in 2015.

Wheat midge emergence was also delayed due to cool, ambient conditions and further affected by cool, wet soils. In many situations, crop staging was not ideal for midge egg-laying. If the wheat crop was not susceptible, control was not required. Wheat midge tolerant wheat has been grown on increasing acres over the past few years and if a midge tolerant varietal blend is grown, it is not considered economical to spray for the midge. A soil survey is underway to estimate levels of wheat midge cocoons present to produce a risk map for 2015.

Grasshoppers are insect pests that tend to be of greatest risk in dry, hot years. The spring conditions were not favourable but in June there were several reports of high numbers of grasshoppers in the southwest north of Maple Creek. Economic infestations were also reported in the southeast. The higher temperatures in the latter part of September were also favourable for grasshopper egg-laying. A fall adult grasshopper survey is being conducted by Saskatchewan Crop Insurance field personnel. The data will be used to produce a risk map for 2015.

A swede midge survey was conducted by Agriculture and Agri-Food Canada as part of ongoing research into this new pest of canola. In 2012-13, the swede midge was identified in fields in Nipawin and Carrot River areas where infestations were most intense, west to near Humboldt. In 2014 there were reports of typical swede midge infested, fused florets outside of the northeast region but results from the survey are not yet available. 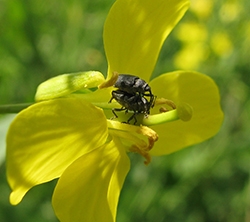 Cabbage seedpod weevils on canola flower. Various insect infestations were reported across Saskatchewan during the growing season; but overall insect pressure was generally lower than most years.