Tightening restrictions on emissions from coal-generated energy appear to be having a diverse effect on Ontario’s crops.

That’s because the mineral release during the decomposition of soil organic matter and deposits from the atmosphere generated primarily by industrial coal burning are what historically met southern Ontario’s sulphur requirements for crops. Environment Canada data indicates deposition of sulphates in southern Ontario has decreased from 33 kilograms per hectare in 1990 to 10 kilograms per hectare in 2010, and the tightening of restrictions on emissions is behind the decreased deposition.

Sulphur is essential for crops, helping with protein synthesis and ensuring maximum growth rates. And some crops, like alfalfa and canola, have significantly higher sulphur requirements than other crops. Because yearly sulphur deposition rates are no longer meeting the needs of the crops, agronomists and researchers believe those with especially high sulphur requirements may benefit from sulphur application.

Supporting this theory is evidence from a research trial conducted in 2012 that revealed forage yields doubled and protein content increased by 39 per cent over the control when sulphur was applied in the spring, even though tissue levels were 0.21 per cent, just below the critical level of 0.22 per cent recommended by the Ontario Ministry of Agriculture, Food and Rural Affairs (OMFARA). The Wisconsin critical level is 0.26 per cent. In mixed stands only, the alfalfa responded to increasing sulphur and the grass yield remained unchanged, resulting in the corresponding increases in protein.

One challenge facing Ontario growers is that OMAFRA publications do not currently list sulphur application recommendations; in the past, additions were not required. To assist with changing that, researchers at the University of Guelph recently examined the response sulphur fertilizer application has on yield and quality in alfalfa hay and canola seed, two crops where sulphur response is likely.

The three-year project, funded by OMAFRA, the Ontario Forage Council and Ontario Canola Growers, expanded ongoing trials in canola and alfalfa to allow precise determination of the critical tissue levels of sulphur, determine the maximum economic rate of sulphur fertilization, and determine which soil and/or crop sampling methodology provides the most accurate determination of crop sulphur status.

The project
John Lauzon, an associate professor at the University of Guelph who led the project, explains he and his team, including graduate student Greta Haupt and former OMAFRA staff Brian Hall and Bonnie Ball, conducted 10 alfalfa and 11 canola sulphur-response trials in southern Ontario from 2013 to 2015.

The researchers harvested the alfalfa hay two to three times in each growing season to attain a weight yield per hectare measurement, and took samples from each plot for each cut to monitor total sulphur uptake and removal by the crop. They harvested canola once it reached maturity and determined seed samples yield. Then for both crops, they were able to analyze yield increases caused by sulphur application.

Lauzon and his team found yield response to applied sulphur at six of 10 alfalfa sites and four of 11 canola sites. They saw the greatest response of up to four times the biomass in alfalfa on mid-textured soils. A coarse-texture site with low organic matter had no response.

“Although there has been no work done in Ontario to develop a sulphur soil test procedure that works on our soils, soil sulphur was assessed using a calcium phosphate extraction procedure,” Lauzon says. “The responsive sites, however, could not be identified by the soil test level.

“In addition, plant available sulphur is easily leachable from soils, similar to nitrate, and much of the natural availability in soils comes from decomposition of soil organic matter,” he adds. “As such, it is generally assumed that responses would be more likely on low organic matter and sandy soils.”

No evidence of this could be found in the trials conducted, however, although Lauzon says more trials are required to test this in Ontario. The team concluded it is possible that, although sulphur deposition has decreased, variability in deposition may play a role in which sites respond.

Overall though, the results from this project demonstrate sulphur is commonly required in Ontario on alfalfa and canola.

More research needed
Lauzon stresses that the results of the study show no clear way of assessing which sites may require added sulphur and the researchers recommend further work be done to determine suitable measures.

“Although the soil test procedure used did not indicate the responsive sites, it is possible that other procedures may be more predictive under Ontario conditions,” Lauzon says. “Continued effort should also be completed to monitor deposition rates as the trends in the rates seen are still decreasing.

“This could result in responses becoming more common in Ontario for canola and alfalfa as well as other crops,” he adds. “Peter Johnson has done some work with winter wheat and has found some responsive sites but did not find any responses on corn. The number of responding sites and the range of crops responding may increase if deposition rates continue to decrease.”

Next steps
OMAFRA staff are now taking the information from this project to growers and industry through presentations and reports, and the Ontario Soil Management Research and Services Committee will discuss the new sulphur fertilizer recommendations and whether to include them in OMAFRA publications.

The researchers also recommend further work to: assess and develop sulphur soil testing procedures for efficacy under Ontario conditions; continue monitoring sulphur deposition rates to determine spatial patterns in Ontario and determine if deposition continues to be reduced; determine sulphur availability and management of manure sulphur; develop management strategies for sulphur such as source, application method and rate timing; and monitor and test other crops. 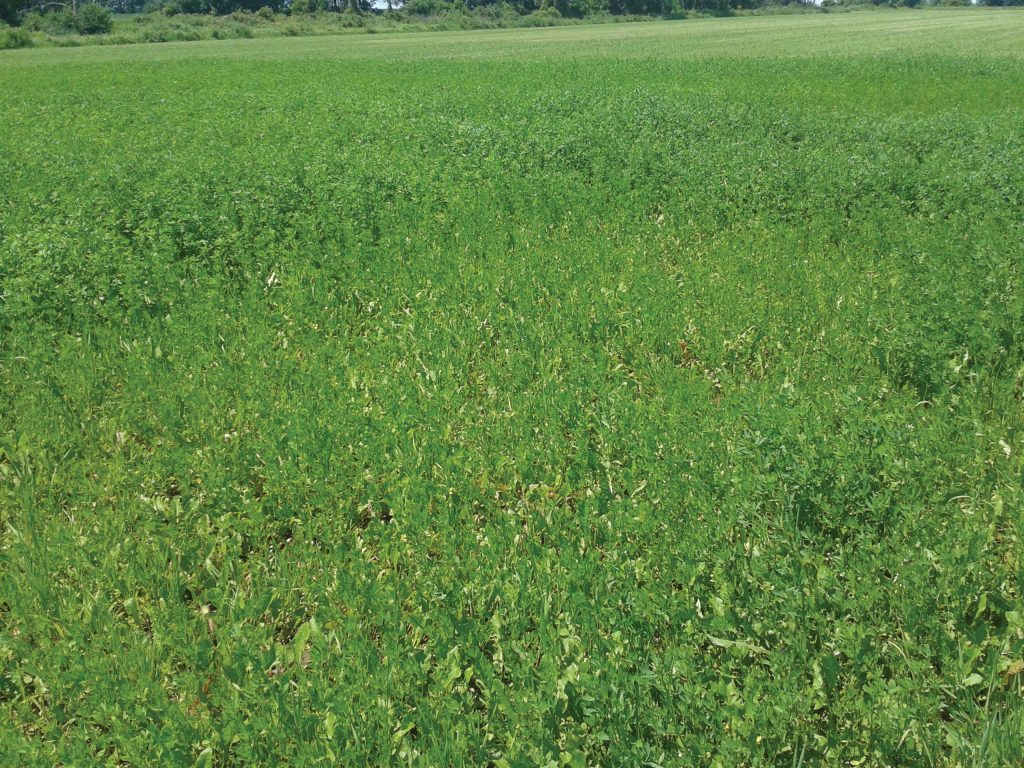 Low sulphur in foreground (mostly dandelions) and sulphur added to the left at third cut.