Conservation management practices can increase sugar beet yields over time – that’s one of the key messages from a 12-year irrigated cropping study that compared conservation and conventional management. 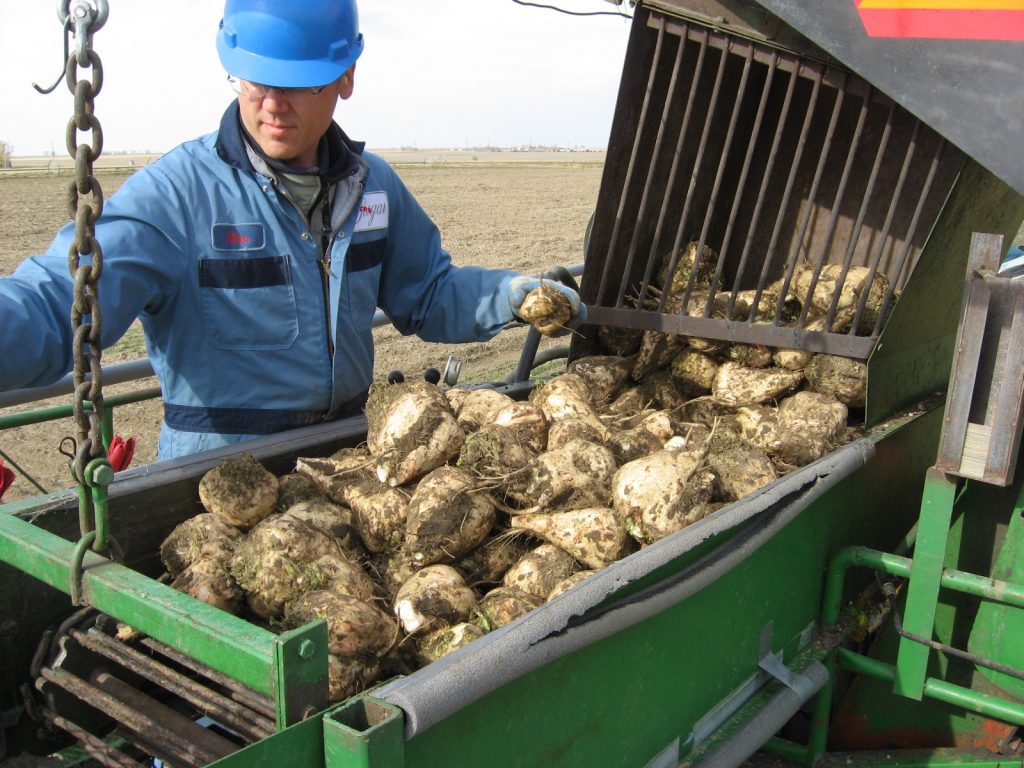 The study, which ran from 2000 to 2011, took place at the Vauxhall Research Substation of Agriculture and Agri-Food Canada (AAFC) in southern Alberta’s Brown soil zone. It focused on three irrigated row crops: sugar beets, potatoes and dry beans.

“The acreages of potatoes, dry beans and sugar beets were on the rise in the late 1990s, and there was a lot of support from irrigation farmers for some rotation research and also research to look at some soil conservation practices,” explains Frank Larney, the AAFC research scientist who co-led the study with his colleague, Bob Blackshaw. “We had a lot of input [in developing the study] from various farmers representing the Potato Growers of Alberta, Alberta Pulse Growers and Alberta Sugar Beet Growers.”

Soil conservation can be an issue with these row crops because they leave behind relatively little crop residue, they may involve intensive seedbed preparation, and root crop harvesting causes quite a bit of soil disturbance.

Larney and Blackshaw collaborated with a number of researchers on this study, including Peter Regitnig with Lantic Inc./Rogers Sugar Ltd., Jennifer Nitschelm, who was with Lantic/Rogers Sugar at the time, and Drusilla Pearson and Newton Lupwayi, both with AAFC. Funding for the study came from the Alberta Pulse Growers Commission, Potato Growers of Alberta, Lantic/Rogers Sugar, Canada-Alberta Sugar Beet Industry Development Fund, Alberta Environmentally Sustainable Agriculture Program, Alberta Agricultural Research Institute, AAFC’s Matching Investment Initiative and the Pulse Science Cluster.

The study’s sugar beet rotations included a four-year rotation with conventional management, and four-year, five-year and six-year rotations with conservation management. Larney says, “We applied four practices as a package on the conservation rotations. The four practices were: reduced tillage where possible; feedlot manure compost inputs to replace some of the fertilizer; fall-seeded cover crops; and narrow-row dry bean (compared to conventional wide-row dry bean).”

Some of the conservation options used in the study weren’t practical to add to the sugar beet year of the rotation. Sugar beets are harvested too late for a cover crop to become established in the fall after harvest. Also, reduced tillage practices were already being used in conventional sugar beet systems. Larney notes, “The conventional tillage practice for sugar beets had been moldboard plowing, but even by the time we started this experiment in 2000, that had essentially disappeared.”

So, the tillage practices before sugar beets were the same in most of the CONS and CONV treatments. In the 4-CONV, 4-CONS and 5-CONS rotations, where wheat preceded sugar beet, fall tillage practices after wheat were identical: one or two passes of a disk harrow. In 6-CONS, where timothy preceded sugar beet, fall moldboard plowing was followed by one pass of a disc harrow to work in the timothy sod. In all four rotations, spring tillage before sugar beets involved one or two passes of a heavy-duty or spring-tine cultivator. 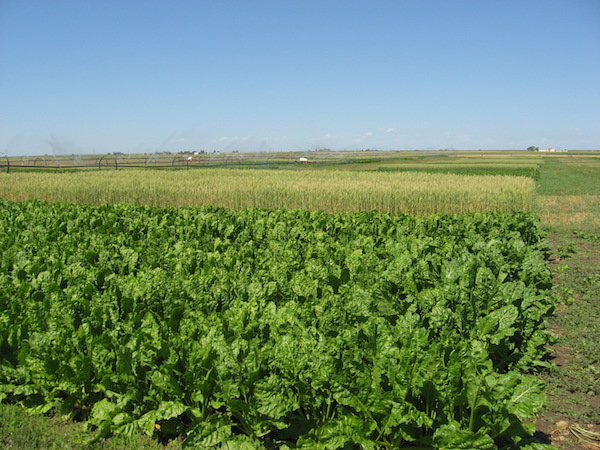 Sugar beet (foreground) and other plots in the 12-year irrigated rotation study at Vauxhall.
Photo courtesy of Drusilla Pearson.

Benefits for sugar beet yields and more
The effects of the different rotations on crop yields, soil quality and other characteristics tended to take several years to emerge. For instance, significant rotation effects on sugar beet root yield did not occur until the study’s seventh year. Averaged over the second half of the study, 4-CONV had the lowest sugar beet root yields of the four rotations. Compared to 4-CONV, root yields were 11 per cent higher in 4-CONS and 5-CONS, and 8 per cent higher in 6-CONS.

Extractable sugar per acre, the key yield measure for sugar beet growers, depends on root yield, sugar concentration, and concentrations of various impurities that hamper sugar extraction. Extractable sugar yields averaged over the second half of the study were significantly higher for 4-CONS and 5-CONS than for 4-CONV and 6-CONS.

Larney thinks the lower extractable sugar yields for 6-CONS, compared to 4-CONS and 5-CONS, might be related to the preceding timothy crop in 6-CONS. He explains that growing sugar beet after a forage legume like alfalfa is usually strongly discouraged because increased nitrogen mineralization from alfalfa residues during the sugar beet year could promote late-season nitrogen uptake, which could reduce the extractable sugar yield. He says, “Even though timothy residue would have lower nitrogen concentrations than alfalfa residue, nitrogen release due to microbial decomposition of timothy residue may have occurred late in the sugar beet growing season, which may have lowered sugar beet performance.”

Regarding the compost applications in the rotations, Larney says: “Sometimes organic amendments, like manure or compost, can impact sugar concentrations, but we didn’t pick up any negative effect of using compost in terms of lowering the sugar concentration in the roots.”

Along with the higher sugar beet yields, conservation management had benefits for the rest of the rotation. For example, conservation management increased marketable potato tuber yields and reduced the incidence of potato early dying. Wheat did well in any rotation as long as it wasn’t grown continuously. Narrow-row dry bean yields were not significantly different from wide-row dry bean yields averaged over the study. However, in the study’s final two years, in an attempt to reduce harvest losses, the narrow-row dry bean treatments were undercut rather than direct combined, which led to significantly higher yields for the narrow-row beans.

In addition, a whole gamut of soil quality improvements occurred over the 12 years. For instance, soil organic carbon levels, soil aggregate stability and microbial biomass significantly increased. Also, the populations and diversity of endophytes – microbes that live within a plant without causing harm – were greater with conservation management. Some of these endophytes were found to be associated with plant-growth promoting benefits such as improved crop nutrition and disease suppression in potatoes.

By the end of the study, weed seedbank densities were similar for all of the three- to six-year rotations, whether they were under conservation or conventional management.

Regitnig, a Lantic research agronomist, says the main conservation practice recommended for sugar beet growers is a good residue cover from the crop before sugar beets. “Tillage that leaves adequate levels of residue from a previous crop is an important management practice in sugar beet production. If possible, sugar beet growers adjust their crop rotation so that low residue crops are not produced back to back. In this regard, small grain crops are preferred between sugar beets and other low residue crops like potatoes and beans,” he says. “Grain cover crops are also used on some lighter textured soils in the spring of the year that beets are seeded, although this is not widespread.”

Regitnig suspects reductions in soil erosion have likely occurred with the introduction of Roundup Ready sugar beets. “There are fewer trips across a field in a Roundup Ready system. Consequently, there is less in-crop soil pulverization from wheels, resulting in less soil movement by wind. This is particularly true if sugar beets follow lower residue crops like potatoes or beans. There was already widespread adoption of reduced tillage and improved trash management prior to Roundup Ready introduction, but the move to this technology also advanced other options like strip tillage, which has reduced soil erosion.”

He adds, “We have done research on strip tillage for about a decade. The research has shown strip tillage can produce equivalent results as a conventional tillage system. A few Alberta growers are now successfully using this production practice on highly erodible sandy soils. There is interest from other growers, but adoption on less erodible soils has not occurred as yet.”