To replant, or not to replant is often the question when a sugar beet stand has been severely damaged. Ultimately, a grower has to do one or the other, and making the right choice will increase net returns from the crop. A six-year study has evaluated replanting recommendations for southern Alberta in light of the switch from conventional to Roundup Ready sugar beets. As a result, growers now have updated recommendations backed by solid data. 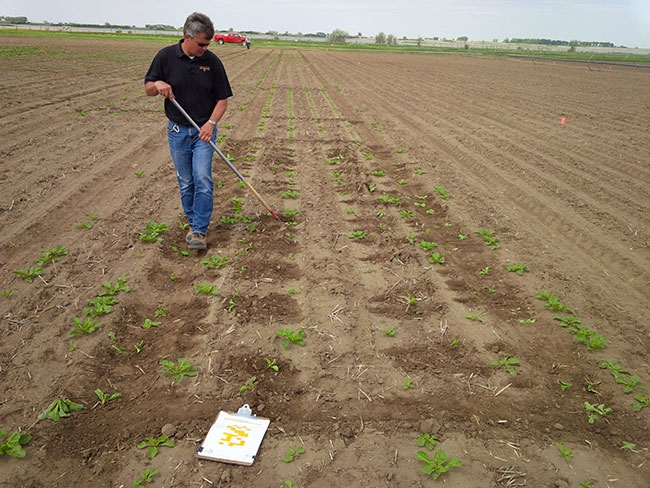 A stand of about 150 plants in 100 feet is optimum for maximizing sugar beet yield and quality. To replant

The three main reasons why growers in southern Alberta might need to replant sugar beet crops are soil crusting, which can inhibit plants from emerging, and then frost and wind damage, which can reduce stands once a crop has emerged.

Frost is the main concern in the early spring, soon after emergence. “Sugar beet growers like to start planting as soon as the field is dry and ready; in southern Alberta that is usually sometime in April. If we have an early to mid-May frost once the beets emerge, then replanting may have to occur,” says Peter Regitnig, the research agronomist with Lantic Inc. who led the study.

The critical factor in replanting decisions is the number of plants per acre because a good stand maximizes both yield and quality, which in turn maximize returns. Quality refers to the beet’s sugar content and the levels of certain impurities that hamper sugar extraction. “Growers want to maximize extractable sugar per acre and both yield and quality are part of that figure,” Regitnig explains.

“We consider 35,000 plants per acre optimum for maximizing yield and quality. That equates to about 150 plants in 100 feet of row. At some point, beet yield and quality will begin to suffer if the plant stand gets too low. Quality begins to suffer before yield does – the yield will be compensated because the beets will grow bigger if there are fewer plants.”

The general recommendation is not to replant a damaged stand if it has 60 or more beets per 100 feet because that plant population can give pretty good levels of extractable sugar per acre.

Replanting differences in a Roundup Ready system?
“In 2009, Roundup Ready beets were introduced commercially in Alberta, and they had close to 95 per cent adoption in that first year. Also in 2009, a number of Alberta sugar beet growers experienced reduced emergence stands due to wind, frost and soil crusting,” Regitnig explains. “So we conducted a couple of small trials to evaluate potential gains or losses from replanting poor stands of beets. Based on that work we decided to do a larger multi-year study.”

The study’s other objective was to assess the effect of the surviving first-plant sugar beets on final crop yield and quality. The effect of first-plant survivors was unknown because, to the best of Regitnig’s knowledge, all previous replanting research had been done on fields that were tilled and then replanted. That past research approach was likely because fields of conventional sugar beets were often tilled before replanting.

“Weed control was a lot bigger issue prior to a Roundup Ready system,” he explains. “The herbicides we had at that time didn’t work as well as Roundup. Sometimes, if you had a field with a poor sugar beet stand that wasn’t competing with the weeds, the weeds would get ahead of the crop. So growers would work the whole field to get rid of the weed problems and start from scratch. Now with Roundup in the Roundup Ready system, it is much easier to just replant into the existing crop rows.”

With funding assistance from the Alberta Crop Industry Development Fund, Regitnig and his team conducted nine trials between 2010 and 2015. “The trials in the first three years collected data on late May or June replant dates, which are more reflective of replant situations that may occur as a result of wind events. In the next three years, the trials obtained data for mid-May replant dates, when growers would typically experience plant losses from frost events.”

Key findings
The replanted treatments performed differently depending on whether they were replanted in mid-May, early June, or mid-June.

For conventional sugar beets in mid-May, the recommendation was to replant if populations fell below 50 to 55 beets/100 ft. “Basically, that recommendation was supported by the data collected in these trials,” he notes. “Possibly that’s because not that much herbicide is applied prior to mid-May, so in a conventional system there would be minimal herbicide setback by early May. The two systems performed quite similarly, but now we have some hard numbers that we never had before to back up that recommendation.”

Although growers don’t usually choose to replant by mid-June, the research team conducted a couple of trials in that period. “For mid-June replants, the extractable sugar per acre gain was only 48 kg/ha when a population of 30 beets/100 feet was replanted. And if we replanted 40, 50 or 60 beets/100 feet in mid-June, it resulted in extractable sugar losses of 199, 406 and 490 kg/ac, respectively. Based on those results, mid-June replanting would only be recommended for populations of less than 30 beets per 100 feet,” Regitnig says.

At this mid-June timing, for a stand of 30 beets/100 ft that wasn’t replanted, the average extractable sugar per acre was 65 per cent of a full stand of first-plant sugar beets; for 60 beets/100 ft, it was 86 per cent of a full stand. Growers could use this information to get an idea of the potential returns from a reduced stand to help in deciding whether to keep the thin stand or to plant the field to an alternate crop.

Regitnig adds, “One quality note was that there was a bigger impact on quality the earlier the replanting took place. Mid-May replanting had a bigger effect on increasing sugar content than mid-June replanting did.”

The value of replanting into existing stands varied depending on when the replanting occurred. “The surviving beets increased extractable sugar per acre in May by just a small amount, about 1.7 per cent, in early June by 7.3 per cent, and in mid-June by 43 per cent. So the later we replanted, the more impact those surviving beets had.”

The up-to-date data and recommendations from this study can give Lantic’s agricultural field staff and growers an added degree of confidence in replanting decisions.