Application timing is key to fungicide effectiveness with stripe rust. But changes in pathogen resistance and differences in variety resistance to stripe rust pathogens can raise questions regarding fungicide application. While stripe rust is not an annual problem, it has been showing up more often over the last five years.

Generally, stripe rust doesn’t overwinter on the Prairies; the spores are blown in from the U.S. during the growing season. A couple of reasons have been suggested for the increasing stripe rust problems on the Prairies over the last few years. Randy Kutcher, an associate professor at the University of Saskatchewan, explains, “In recent years the pathogen worldwide seems have adapted to tolerate somewhat warmer temperatures.”

The pathogen might also be using a green bridge to overwinter here. The disease may spread to winter wheat seedlings if they emerge before the spring crops ripen. An early snowfall may provide insulation for the pathogen before the cold weather hits, allowing it to survive and spread in the spring.

“About 12 to 15 years ago, stripe rust seemed to be mainly contained in the irrigated areas of southern Alberta. Now each summer there are reports of stripe rust [on the Prairies],” notes Kutcher. “In 2013, we surveyed 90 winter wheat fields in July. About one-third had at least a low level of stripe rust. [Although a few fields had serious infections], it was probable that many had been sprayed with fungicide, but for those that weren’t, most would not have been worth spraying for the disease. However, it was easy to find stripe rust, and 10 or 15 years ago that probably wouldn’t have been the case.”

Choose a resistant variety when possible
For hard red spring wheat growers, the best defence against stripe rust is to grow a resistant variety.  Some varieties have better resistance than others. Denis Gaudet, a research scientist at Agriculture and Agri-Food Canada (AAFC) at Lethbridge, Alta., says that plant breeders have worked to improve disease resistance across all wheat classes, and that in hard red spring wheat, there are good varieties that don’t compromise on other agronomic factors.

“I encourage growers to look at the recommended varieties list from the provincial departments of agriculture and choose a variety with good to very good resistance,” says Gaudet. “There are some good high yielding spring wheat varieties with resistance, and all the durum varieties are quite resistant.”

The biggest issue is with winter wheat. Gaudet says that Radiant winter wheat variety used to be considered resistant to stripe rust, but that resistance has been overcome by the stripe rust pathogen. “A new race took out the resistance and it is no longer effective,” says Gaudet.

To spray or not to spray
Kutcher is working on a large project to evaluate a combination of varietal resistance and fungicide timing options for controlling stripe rust in wheat. This project started in 2012, in response to the increasing occurrence of this disease on the Prairies.

Stripe rust symptoms are usually first observed in the Prairies around mid to late June, so the researchers are evaluating fungicide application at early flowering time.

“Based on the results so far, early flowering is a pretty effective fungicide timing for wheat varieties [with no stripe rust resistance]. For varieties with adult-plant resistance genes, you may not need to spray at all because their resistance will be expressed as the plant begins to head. For those varieties, you may only need to spray were stripe rust to arrive much earlier than normal, although that will depend somewhat on seeding date,” says Kutcher.

Protecting the flag leaf and penultimate leaf (the upper two leaves), and the upper part of the stem, is important because those essentially provide nearly all of the green area needed to fill the head.

Gaudet says that by avoiding a fungicide application on varieties rated good to very good, the likelihood of fungicide insensitivity will be reduced. However, if a variety is rated at fair, poor or very poor and stripe rust is developing, then spraying will likely be necessary. “Keep an eye on any variety that is rated fair or less.”

AAFC and Alberta Agriculture and Rural Development (AARD) also partner on providing early warning signals to farmers. Field surveys are conducted every spring, and when stripe rust is observed and as the growing season progresses, updates are sent out to crop consultants and the media to alert farmers.

Fall fungicides for winter wheat
A recent fungicide project assessed the effects of various seed treatments, with or without a fall foliar fungicide application, on stand establishment and yield in winter wheat. The project was part of a major winter wheat study being led by Dr. Brian Beres, an agronomist with AAFC at Lethbridge, in collaboration with Kelly Turkington, plant pathologist with AAFC at Lacombe, Alta., Kutcher and other researchers. The study involves a suite of projects to determine the effects of diverse factors on stand establishment. The overall aim is to get a better handle on what is hindering adoption of winter wheat on the Prairies.

The researchers wanted to determine if seed treatments would help or hinder stand establishment and potentially winter survival because they had anecdotal reports on both sides of the argument. They included the fall foliar application in case pathogen pressure in the fall might be affecting stand establishment and crop vigour. They also wondered if a fall foliar application might prevent the need for a spring fungicide application.

The strongest crop response was from the Raxil WW seed treatment, with or without a fall foliar fungicide. This dual fungicide/insecticide product resulted in high, stable yields over the 20 site-years.

The other seed treatments needed the addition of the Proline foliar application to improve and stabilize yields. In fall 2010, the Lethbridge, Scott and Melfort, Sask., sites were affected by stripe rust, and for those three sites, the addition of a fall foliar application resulted in higher yields. However, even at sites with no fall foliar disease symptoms, the foliar fungicide had a positive effect.

Beres says he was surprised to see a statistically significant effect from the fall foliar fungicides. “It could be that winter wheat yield is set relatively early and so it is perhaps more sensitive to an earlier application of a fungicide. It could be that by the time growers can get out in their fields to apply a fungicide in spring, particularly if the timing is delayed, winter wheat’s yield potential has been set.” Another possibility might be that the positive effect is related to the specific combination of active ingredients used in some of the treatments.

The researchers will be conducting additional trials to further investigate various fall fungicide options for winter wheat. A new study will combine planting dates with a seed treatment containing the fungicides prothioconazole and tebuconazole, which has been observed to improve frost tolerance in Europe. 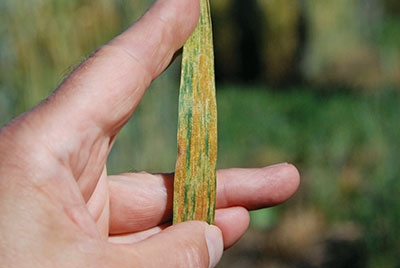 
Related
Winter survival of stripe rust
Effectively managing stripe rust in Ontario
Keeping an eye on stripe rust
Is it too late to spray for stripe rust?