If you’re targeting higher oat yields, what are the best ways to minimize lodging problems? 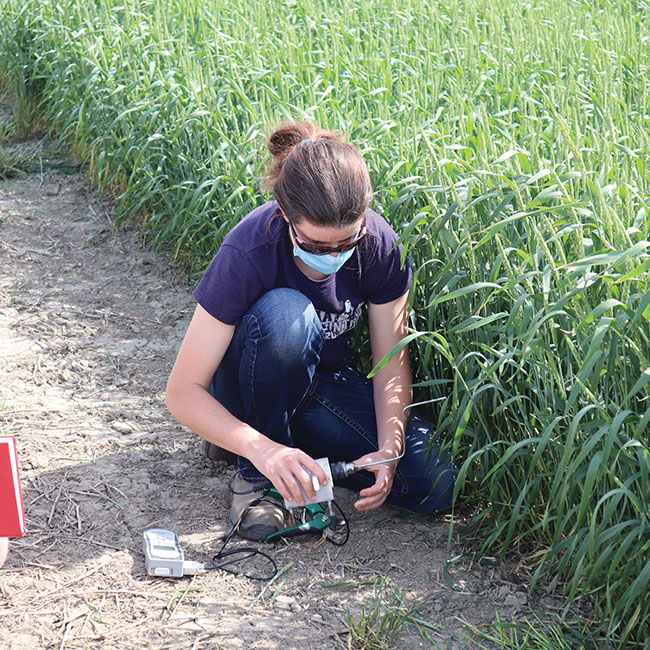 Field research in northern and eastern Ontario is taking a rigorous look at different agronomic options to boost oat yields. The focus is on determining how much each practice actually increases yield and how much it affects lodging risk.

Although the three-year project includes several familiar practices, the preliminary results offer some surprises – including evidence that a fairly simple practice could be a reliable way to significantly increase yields without reducing standability.

“There is an inherent trade-off between increasing yield and increasing lodging risk. That’s because when you have a heavier panicle, the plant’s centre of gravity shifts upwards so the plant will be more top-heavy, making it more susceptible to lodging,” explains Joshua Nasielski, an assistant professor in the University of Guelph’s department of plant agriculture who is leading the project.

“So, if you are trying to increase oat yields, you’ve got to account for any impact on lodging because lodging, especially in northern Ontario, is a major limitation to crop production.”

Nasielski notes that the project’s funders span the entire oat value chain. “Everyone was interested in trying to mitigate lodging to keep oats competitive with other crops in the rotation by increasing yield.” The funders include: Grain Farmers of Ontario, Syngenta, PepsiCo (which owns Quaker Oats) and the Ontario Ministry of Agriculture, Food and Rural Affairs (OMAFRA). (PepsiCo funding is not used for the project’s plant growth regulator research.)

He and his project team are measuring lodging in several ways. They use a visual rating system, from zero to 100 per cent lodging, to assess how much lodging has actually occurred. They do this rating two or three times because lodging that occurs earlier, especially at mid-grain fill, is more detrimental to yield than lodging that happens right before harvest.

Since not every growing season brings weather that favours lodging, the team also evaluates lodging risk by directly measuring both stem and root lodging resistance, using techniques developed by other researchers such as Bao-Luo Ma with Agriculture and Agri-Food Canada (AAFC). Both types of measurements are done on individual plants and take a lot of time, so the team only measures them at mid-grain fill.

For both types, they first measure the plant’s centre of gravity, which depends on the weight of the panicle. Then, they measure stem lodging resistance by taking the stem into the lab and using a device that measures the amount of force required to break the stem. They measure root lodging resistance in the field, cutting off the top half of the plant and then pushing on the stem using a torque screwdriver to measure the root system’s resistance to that pushing force. They then use those measurements to calculate the amount of weight the stem or root can bear if it is being pushed away from the vertical.

Although the oat variety is an important factor in lodging risk, Nasielski also notes, “The amount of root resistance partly depends on the soil. A very compact soil will have very strong root-lodging resistance, whereas a soil with good tilth and more pore space will be more prone to lodging.”

Nasielski notes, “We are also looking at how much these agronomic strategies move the needle on yield and on lodging potential, compared to variety selection and to the year.” So, for every experiment, they compare two oat varieties, Nicolas and Nice, and for the seeding depth, row width and seeding rate experiments they add a third variety, Camden. Camden is much more lodging-resistant than Nicolas or Nice.

The five experiments are taking place at two Ontario Crops Research Centres (OCRC): New Liskeard, which is on a heavy clay soil, and Winchester, which is on a clay loam. With about 250 plots per site per year, the team has data from around 1,000 plots so far.

Nasielski says the skilled technicians at the sites are key to making the project possible: Nathan Mountain and Melinda Drummond at New Liskeard; and Holly Byker, Ian DeSchiffart and Ben Melenhorst at Winchester. Graduate student Marion Studhalter and a regiment of summer students are also working on the project.

“We thought the half rate would probably reduce yield a little bit but would reduce lodging a lot more because, with less crowding, each individual plant can have a larger root system and a stronger stem,” Nasielski says. When plants are crowded together, they tend to grow taller with thinner stems and narrower root systems.

The results were what they expected. “We know the optimum seeding rate varies from year to year and even from variety to variety. But looking at our data, I think the standard seeding rate of 300 seeds/m2 is good enough. It performed well across all sites and varieties.”

The half rate did reduce lodging. Nasielski suggests, “If you know that one part of your field lodges every year, then reducing your seeding rate in that area might be an option to avoid lodging.” 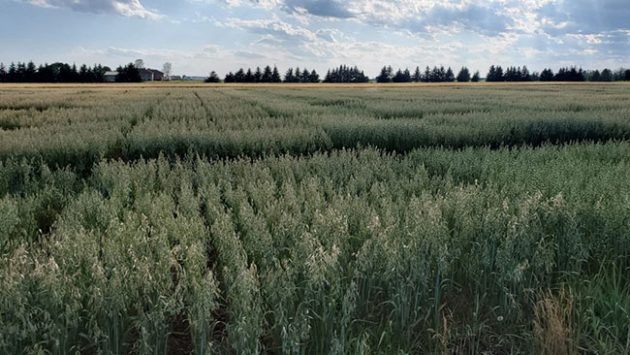 Nasielski’s oat project involves about 250 plots per site per year, comparing the effects of different treatments on lodging and yield. Photo courtesy of Marion Studhalter.

Narrow rows surprisingly better
“The agronomic strategy that surprised us the most was the effect of row spacing on yields,” Nasielski says.

The standard row spacing was the usual drill setting for each location: 7.5 inches at Winchester and 7.0 inches at New Liskeard. These spacings were compared to 5-inch spacing.

According to Nasielski, evidence from other regions, like the U.K. and Prince Edward Island, shows narrower spacings result in higher cereal yields. He thinks this is mainly because narrower spacings result in faster canopy closure, but also because the spacing between the plants within each row is wider. He explains, “Since we are keeping the seeding rate constant but reducing row spacing, there are fewer plants per row in the 5-inch row spacing because there are more rows per acre.” And with less crowding in a row, the plants would likely have stronger stems, larger root systems and better standability.

So Nasielski was not surprised by their finding that the 5-inch rows boosted yields. However, he was surprised at how consistently yields increased. “In most agronomic studies, a practice might work in most years but not in others, in some varieties but not in others. But we found that narrower row spacing increased yields significantly in every year at every site and for all varieties.”

At New Liskeard, going from 7-inch to 5-inch spacing increased yields by about 8 or 9 bushels per acre on average. The magnitude of the yield increase differed a little between varieties and between years, but yields always increased.

Shallow seeding, higher risk
For seeding depth, the project’s standard practice was to set the seed drill at 1 inch to 1.5 inches. That depth was compared to seeding as shallow as possible and seeding as deep as possible. “We measured the actual depth we achieved since it depends a lot on the soil conditions,” Nasielski says. “Depending on the year, we got as shallow as about 0.75 inches and as deep as about 3 inches.”

He has heard from farmers, especially in northern Ontario, that they like to plant shallow to try to speed up emergence. However, studies have shown the crown roots need to be below 1 inch to reduce root-lodging risk.

Only at New Liskeard in 2021 did the project team manage to seed shallower than 1 inch. As expected, those shallow-seeded plots had much higher lodging than plots seeded below 1 inch, confirming the critical depth found in other research.

60/30 nitrogen split is best
The standard nitrogen practice in this project was to apply 90 pounds of nitrogen per acre (lb. of N/ac), split between 60 lb. at planting, and 30 lb. at Growth Stage 32 (GS 32, when the second node is detectable). “If you want to push your nitrogen rates, then you’ll probably have to go to a split strategy,” Nasielski explains. “And previous research at New Liskeard showed that this 60/30 split could reduce lodging.”

They didn’t find much difference in lodging among the different treatments. Nasielski thinks this is probably because the optimum nitrogen rates at both sites were around 60 lb. of N/ac. “In these trials, we could have just applied 60 pounds upfront and still maximized yield without increasing the lodging potential,” he says.

The 60/30 split usually produced the highest yields. “Compared to applying 90 pounds of nitrogen upfront, we got about a four-bushel yield increase by going with 60 pounds upfront and 30 at GS 32, on average across all four site-years and varieties. The 30/60 split resulted in a small yield penalty of about 2 or 3 bushels, compared to the 60/30 split. That really reinforces the need to have enough nitrogen upfront because producing productive tillers is such an important yield component.” 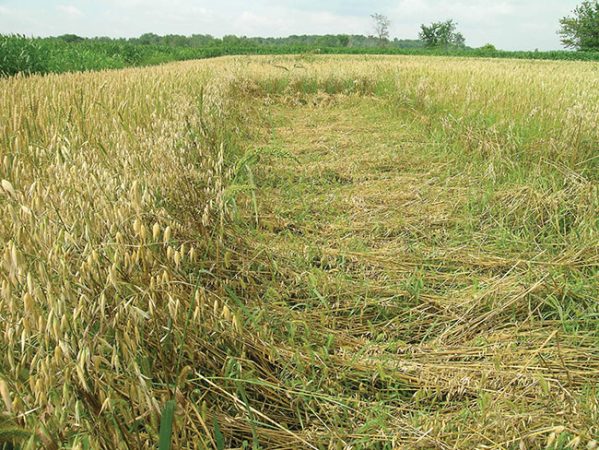 Sometimes less lodging with a PGR
For the final experiment, the team applied six different nitrogen rates, going up to 160 lb. N/ac, and looked at the effects with and without Moddus, a plant growth regulator (PGR) recently registered for use on oats in Ontario.

With optimum nitrogen rates around 60 lb. N/ac in this project, the higher nitrogen rates in the PGR experiment had very little effect on yields. “In these trials, pushing nitrogen rates much beyond the rates recommended in OMAFRA’s Agronomy Guide didn’t pay off,” he says.

Variety and location are big factors
“Part of our results show the importance – and I’m sure farmers appreciate this already – of the growing season and variety selection. Over the four site-years, environment had a huge impact on lodging and yield potential, and within that there was as much as a 15-bushel yield difference between the highest and lowest yielding variety.”

Initial take-homes
Based on the results so far, Nasielski points to two key findings for oat growers to consider.

“The number one message is that switching from a 7- or 7.5-inch row spacing down to 5 inches significantly increases yield without increasing lodging risk,” he says.

“Some farmers prefer the 7.5-inch spacing because they plant soybeans at 15 inches with their drill. But if you are heavily into spring cereals – and I think the findings would hold for spring wheat as well – our results show you can get a very significant yield increase by just changing to a narrower spacing.”

He adds, “We’ll be doing some larger field-scale trials in 2022 to validate the row spacing results.”

“Number two is, if you are seeding shallow, especially shallower than one inch, you are going to have a higher risk of lodging. And even though seeding deeper delays emergence by a day or two, that small delay almost certainly won’t reduce your yields.”

The project’s final field season will be in 2022.