A new agronomic study by Agriculture and Agri-Food Canada is examining how these two harvest management methods can affect canola production.

Thanks to improved pod shatter resistant canola hybrids and other factors, there’s a growing movement across the Canadian prairies towards straight cutting canola rather than swathing the crop at harvest time.

Brian Beres is an agronomy research scientist based at Agriculture and Agri-Food Canada’s Lethbridge Research and Development Centre who’s undertaken numerous studies on enhancing crop production systems. He believes the swing towards straight cutting in canola is part of a larger trend in agriculture.

“One thing we’re seeing with other crops, like wheat and peas, is a move away from swathing and more towards straight cutting,” Beres says.

“It was probably a matter of time before that same goal to streamline operations was explored in canola, and now we have around 60 per cent of acres in Western Canada converted to straight cutting.”

Beres points out there are still farmers who remain committed to swathing for different reasons, as well as many others who may be on fence on whether straight cutting or swathing canola is the way they should go.

“There won’t be a fire sale of swathers any time soon, as some growers point out prudently that harvest management decisions may be based on in-season factors,” he says.

Beres is currently leading a research study taking place in Alberta, Saskatchewan and Manitoba, which could help canola growers optimize the two harvesting options for their farming operation and under what conditions.”

The project, which started two years ago, is examining how the interplay between seeding rates, hybrid maturity and harvest method and timing can affect canola yields. Two different pod shatter reduction canola hybrids, one a late-maturity and the other an earlier-maturity hybrid, are being utilized in the study.

After two field seasons in 2018 and 2019, a third field season was slated for this year but was suspended due to the COVID-19 pandemic. Beres says it’s not yet known whether there will be an opportunity to complete the final two growing seasons as originally planned.

Beres notes that one of the interesting findings from the study to date has to do with how canola hybrid maturity may affect straight cutting and swathing differently.

“What we’ve observed, which is a bit of a surprise and we don’t obviously have a full understanding of yet, is that we’re starting to see that hybrid maturity may interact with the harvest management system,” he says.

“For example, if you select an early-maturing or medium-maturing hybrid, similar to the L233P hybrid that we’ve used, straight cutting could actually provide higher and more stable yields than if you were to swath instead,” he adds.

“And then interestingly, the opposite seems to happen if you’re using a later maturity hybrid like L255PC – you appear to achieve greater crop stability in terms of yield if you were to swath.

“So, while there is no apparent yield penalty with straight cutting this hybrid, there may be a cost in terms of consistent yield from field-to-field or year-to-year versus swathing.”

Beres notes some farmers may try to save some money by cutting back seeding rates when planting canola, but his study indicates that, while it is understandable from a crop input cost context, it may not be the wisest course. 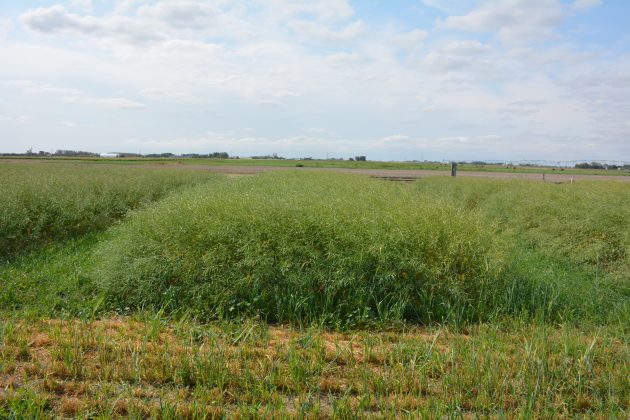 “The caution here is that while there’s a temptation to reduce those seed rates, there must be greater awareness that those results may be highly variable across fields and calendar years compared to optimal seed rates,” Beres says.

Beres says when the seeding rate was doubled to 120 seeds per square metre, the result was a more uniform crop and significantly higher yields (the researchers found no improvements in yield with seeding rates above 120 seeds per metre).

Beres notes crop phenology was also shortened by one or two days using the higher seeding rate, which would likely lead to an earlier harvest.

“We see that with other crops too, not just canola,” he says. “We know that higher densities usually improve crop vigour and result in earlier harvest dates, and that tends to optimize and stabilize yield.”

Beres says there’s been another interesting finding thus far related to the pod shatter reduction trait shared by both the late-maturing and earlier maturing canola hybrids used in the study.

“We know that if your swath stays out too long, or you straight cut at the wrong time, there could be implications around seed loss and shattering,” he says. The researchers, however, found that the shatter reduction trait provided a buffer that helped keep that from happening.

“What we’re seeing is that the pod shatter reduction trait, combined with either straight cutting or swathing, provides excellent protection against seed loss,” says Beres. “We’re not finding any seed loss issues with either harvest method or hybrid type or seeding rate density factors.”

Beres summarized the main findings of the study so far as follows: “When we pull this all together, what we would say right now is that a canola production system [incorporating] 120 seeds per square metre or 12 seeds per square foot, coupled with timely straight cutting harvest management, will provide high and stable yield, particularly if it’s an earlier maturity hybrid.”