As more canola growers look to straight combining as an option, researchers are working to help understand the opportunities and risks. Although straight combining canola can save time and money and result in improved seed quality, harvest timing is critical. Cultivar selection, timing of harvest and weather conditions influence the relative shattering resistance and pod drop losses of canola.

“We set up trials at four sites including Indian Head, Melfort, Scott and Swift Current and evaluated several modern B. napus hybrids to identify cultivars that may be particularly well suited for straight combining,” says Chris Holzapfel, IHARF research manager. “We compared two harvest dates, one at the optimal harvest timing and the final harvest completed three to four weeks later. We also wanted to quantify the environmental seed loss contributions from pod drop versus pod shattering under a wide range of environmental conditions.”

Over the four years of the study, as new cultivars with improved shattering resistance became available, they were added to the trials, with a total of 16 hybrids evaluated over the study period. A seeding rate of 115 viable seeds/m2 was used in all trials and all plots were direct seeded into standing cereal stubble. Recommended fertilizer rates and herbicides for specific herbicide resistance systems were applied. At each site the plots were designed to be large enough to ensure there was enough for two separate passes to be completed at the two distinct harvest dates. The first harvest date (T1) was targeted at, or slightly before, the optimal harvest stage (seed dried to 10-12 per cent moisture content with two per cent or less green seed). The second harvest date (T2) was targeted at three to four weeks past the optimal stage.

“The results from across the trials were as we expected – the observed yield losses due to pod drop and pod shatter generally increased as harvest was postponed past the optimal crop stage,” explains Holzapfel. “However, the extent to which these losses increased varied dramatically depending on the specific conditions encountered. In years where shattering losses were low, such as 2013, all of the cultivars evaluated performed pretty well. However, in years where conditions were challenging, such as the severe wind events in 2012 and higher than usual sclerotinia incidence, all of the cultivars were impacted and there were severe losses in all treatments. Substantial losses in all cultivars occurred when severe conditions were encountered and the opposite was generally true under more favourable conditions.”

Overall, the total losses averaged across all sites with straight combining were typically less than five per cent for all hybrids. Provided that combining was not excessively delayed, this is unlikely to have much impact on yield relative to swathing. For the second harvest date or delayed harvest, the actual losses were extremely variable. Depending on the hybrid and sites evaluated, the average total losses could exceed 10 per cent and, under extreme conditions, some individual cultivars sometimes exceeded 30 per cent total losses. While yield losses due to pod drop were typically negligible with early harvest, these losses frequently exceeded those due to pod shatter when harvest was delayed by three to four weeks. Pod drop appears to be a factor of increasing importance as straight combining is delayed.

“While genetic differences in resistance to environmental seed losses do exist, all of the hybrids evaluated could be straight combined successfully, provided that harvest is completed in a reasonably timely manner, disease pressure is low and extreme weather is not encountered during the critical crop stages,” says Holzapfel. “The differences amongst hybrids were typically much smaller than the differences observed between harvest dates or from one site to the next, and the observed differences were not always consistent from year-to-year or site-to-site.

“Therefore, other factors such as overall yield potential, days to maturity, standability and herbicide system are likely at least, if not more, important to consider when choosing a canola hybrid with the intention of straight-combining,” he adds.

The trials continued through the 2014 growing season at all four locations, and researchers expect to see similar results. 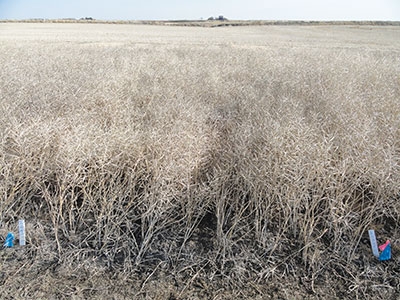