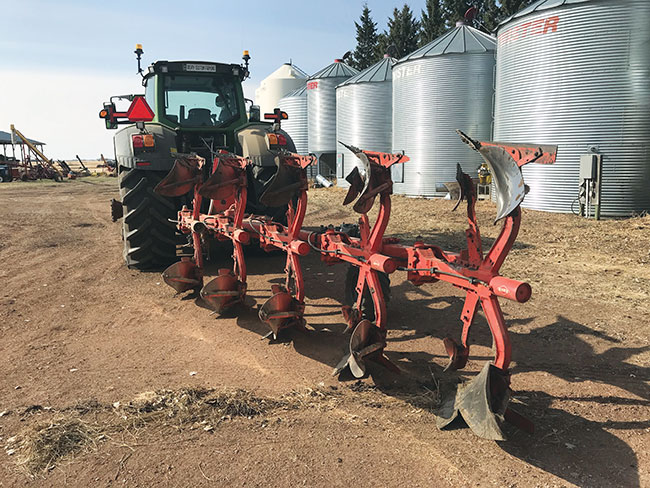 As part of a RWOAC project, a plough with skimmers is being tested to see if wild oats can be controlled by burying them. Photos courtesy of Nathan Espheter.

The Great Grain Robber. There was a time when wild oats were called that, and considered the worst weed on the farm. So much so that a Wild Oat Action Committee (WOAC) was established in 1973 to help create awareness of the economic losses that wild oats were causing, and to seek solutions through research and extension. That committee was long ago abandoned, but it has inspired a new group to tackle herbicide resistant wild oats: the Resistant Wild Oat Action Committee (RWOAC).

“Herbicide resistant wild oats are widespread across the Prairies. It’s likely on every farm, despite the best efforts to prevent it,” says Eric Johnson, research officer in the department of plant sciences at the University of Saskatchewan. Johnson has a long history as a weed scientist, and recalls the efforts put in by the original WOAC.

The RWOAC mirrors, in some ways, the original WOAC. WOAC was formed in 1973 because of concerns brought forth by Len Shuttleworth of the Canadian Grain Commission regarding the costs and loss of markets from wild oats in the grain handling system. The Committee was established to create awareness of the seriousness of the problem, and to outline the costs in yield, dockage, and transportation and cleaning costs.

Each Prairie province had its own committee, and a research committee was formed to focus on control methods, surveys, economic thresholds and weed biology. Results were published at meetings and proceedings. Extension materials were also developed.

“The original committee carried on until about 1983. By that time, effective herbicides had been developed, and there was a thinking that an endless pipeline of herbicides would control the problem,” Johnson says.

New Resistant Wild Oat Action Committee launched
The origin of the new RWOAC came from a group of producers in the Daysland and Forestburg areas of central Alberta who were trying to address herbicide resistant wild oats. They were consulting with Johnson and weed scientist Neil Harker (retired) with Agriculture and Agri-Food Canada. Out of these discussions, a letter was sent by Daysland producer Ken Eshpeter, one of the producers in the group, and Harker to the Canadian Weed Science Society requesting that they form a resistant wild oat action committee. 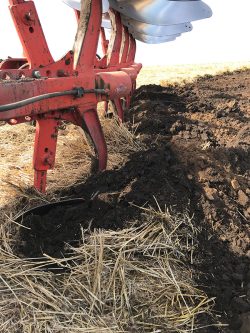 Grassroots producer engagement that looks at on-farm research input is one of the RWOAC pillars.

The RWOAC was formed, and a steering committee set up in March 2020. Its mission was to form a committee with cross-industry representation devoted to developing herbicide resistant wild oat management solutions through producer engagement, knowledge transfer, and research. The Committee consists of farmers, research scientists, agronomists and pesticide companies.

Eshpeter says the producer engagement is one of the main objectives of the Committee. Producers are being engaged to identify potential solutions, and help with the design and implementation of research projects.

“There needs to be producer engagement at the grassroots level. Producers need to be able to provide input on research projects, but also be able to trial them on their own farm,” Eshpeter says. “If a management solution requires a very expensive, purpose-built machine just to validate whether it’s even feasible, it’s not going to happen at the farm level without some support.”

As part of producer engagement, Eshpeter started two producer-directed demonstrations in 2021. He is working with eight producers in the area. One project is the effect of rod weeding, pre-seed or pre-emerge, on wild oat control. The second is an inversion tillage trial where wild oats are buried with a plough to see if that will inhibit germination and encourage decay of wild oat.

“We aren’t doing replicated trials. At this stage we are looking at this as proof of concept, which we can then turn over to researchers to validate the results on a more scientific scale,” Eshpeter says.

The committee hopes to also establish producer groups in other provinces. Johnson says Australia has had great success in involving farmer groups to address weed resistance. Management options like the Harrington Seed Destructor, and chaff collection came from farmers, and extension resources like www.weedsmart.org.au have helped spread the word.

Another objective is to identify research gaps and prioritize research activities for management of herbicide resistant wild oats. This objective circles back around to on-farm proof of concept projects.  Eshpeter says it also provides the opportunity to then take that research out to Applied Research organizations to test the research on a larger scale before wide-spread adoption by producers.

“We have had some early discussion with Applied Research Associations to take small plot research to the next step. They have the resources and expertise to take the research further,” Espheter says. “Historically, we’ve sometimes been missing that step and it has been left to innovative farmers to try out new technologies, with big risks, and sometimes there have been hard lessons learned.”

Another objective is to communicate knowledge and research results to producers and agronomists through extension activities. To date, nine infographic have been developed and are hosted on the Canadian Weed Science Society’s website. (weedscience.ca/wild-oat-action-committee) The Committee also received funding from Alberta’s RDAR (Results Driven Agriculture Research) to develop a video and written extension materials. A video entitled, “Understanding Resistant Wild Oat,” has just been completed and will be available online soon, also through the CWSS website.

Johnson says another initiative is testing for resistance. Farmers can participate in resistance testing provided they take part in a survey developed by Eshpeter. Over two years, the Committee will try to involve about 20 farmers in Alberta, and 10 farmers in Saskatchewan and Manitoba.

“The biggest hurdle is admitting that you have the problem. You can’t deal with it unless you know you have it. There’s no shame in it,” Eshpeter says. “We all have to work together before it really blows up.”

Inversion tillage for wild oat control
Espheter set up the first year of the inversion trial in 2021. The hypothesis is to see if a mouldboard  plough with skimmers can be configured to cut and turn over the top two to three inches of the soil profile. This is where the bulk of the resistant wild oat seedbank is suspected to be. Burying them cleanly and completely enough at the bottom of the furrow may either greatly impeded germination, and/or deposit the bulk of the resistant seeds into conditions at depth where they will degrade and lose viability. 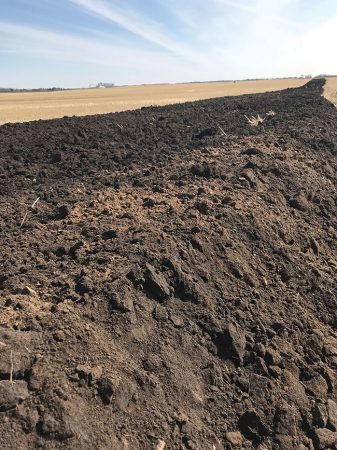 A ploughed wheat stubble with intermittent tufts of wheat straw at the furrow edges illustrating that the stock skimmers don’t consistently bury all the surface layer.

If successful, a possible treatment would be to plough resistant patches to bury the seed bank and then likely leave them undisturbed for eight to 10 years with the intent of degrading the buried seeds.

Espheter says the results of the first year were quite inconsistent. He observed a range of results from almost no wild oat germination, to strips of oats emerging at the edge of the furrow where burial was shallowest, to almost a carpet of oats across the plot.

“This asks a couple big questions. Is the plough burying the surface layer deeply and consistently enough to do anything to the surface wild oats? And are there already enough viable oats, five- to eight-inches deep in the soil profile that come up with ploughing that we are effectively not changing the surface seedbank?”

In 2022, the plan is to use a wider, modified skimmer to cut most of the full width of the main mouldboard, a narrower furrow to create tighter inversion, and two or three different working depths. He is also doing pre- and post-ploughing wild oat seedbank density counts at several depths through the soil profile to better understand where the oats actually are and how they are  being moved.

“The overall concept looks promising for soils that are deep enough to handle ploughing.

However a lot of work remains to determine if this is possible and how it can consistently be done,” he says.