There are many unknowns, but being aware of the disease is more important than fearing it. 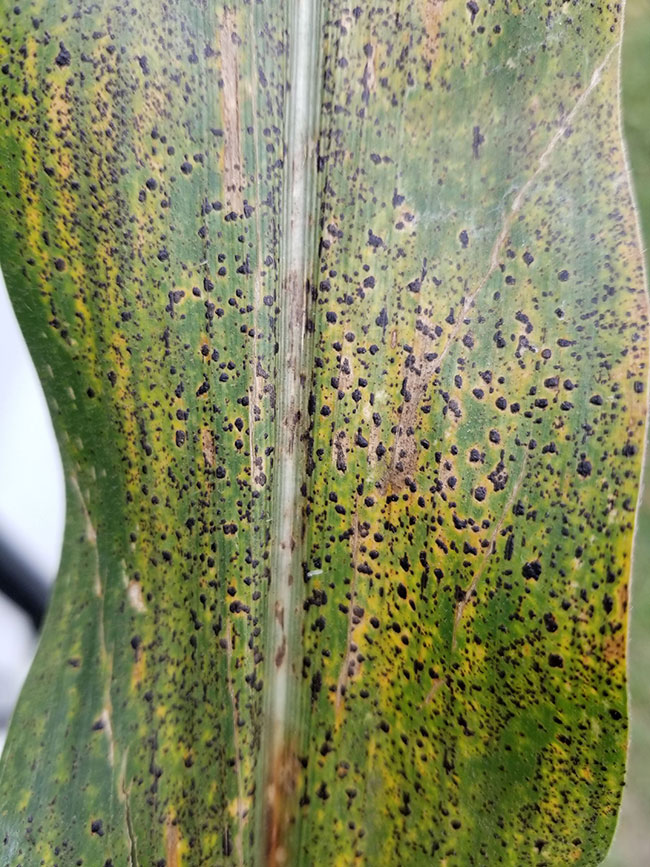 Tar spot in corn is an emerging disease issue in Ontario. Albert Tenuta, field crop extension plant pathologist with the Ontario Ministry of Agriculture, Food and Rural Affairs (OMAFRA) at Ridgetown, Ont., provided an update on the disease at the Top Crop Summit, Feb 23-24, 2021.

Tar spot has been on the radar in the United States for decades because of its impact on yield loss. The yield losses can be minor, but can average 10 to 50 per cent in grain and silage corn.

Hybrid susceptibility is an important factor in tar spot development. All hybrids are either susceptible or have a partial tolerance.

Another important factor is environment. Favourable conditions for development include temperatures between 17 and 25 C, 75 per cent humidity, and leaf wetness of seven hours.

What has happened in the U.S. is causing a concern in Ontario. There has been an increase in the disease in the U.S. in 2018 and 2019. In the past year the spores have move up into Ontario. The pathogen overwinters in crop residue, so it will be in southwest Ontario in 2021.

The disease is easy to identify. It produces tar-like spots on the leaves. Rub the leaves and if it feels like sandpaper, it is probably tar spot.

Whether tar spot develops in Ontario in 2021 depends on the disease triangle: a susceptible hybrid, the right environmental conditions, and the presence of the pathogen – which is in Ontario.

Tar spot can develop quite rapidly and symptoms can appear two weeks after infection. The concern is that there can be more than one life cycle in one growing season. If infection happens early in the growing season, the disease can cycle several times resulting in a lot of infected tissue and early senescence. This causes grain yield loss and reduction in silage quality.

The disease was found in five counties in southwest Ontario in September 2020: Wellington, Essex, Lambton, Elgin and Middlesex. In some cases the disease was minor but some fields had 10 to 15 per cent leaf damage.

The biggest risk for Ontario in the next several years is what happens in the U.S., because the spores can blow in on the wind. A question is whether management practices will have to be adjusted. Field scouting will be important. If growers have been seeing white mould in their beans, that’s the same environmental conditions that favour tar spot.

There is a lack of understanding on hybrid susceptibility. Research is in the works to look at that. Ask your seed company if they have any information on tar spot resistance in their hybrids.

Fungicide application is another question, as well. OMAFRA is part of a Tar Spot Working Group in the U.S. and Ontario. Research is looking at the efficacy of foliar fungicides and application timing. Foliar application with multiple modes of action – two to three – is showing the best control, and also provides a larger window of protection as well.

Fungicide timing is also important. Generally timing targets the tasseling to silking stage. But in 2018 in the U.S., when the disease established early, a vegetative application was warranted. In 2020, the disease didn’t get started until R4 to R5 stages, and at those reproductive stages, there is very little impact from the disease.

Crop rotation may not provide a big advantage because the spores are airborne. Rotation might help to keep the spore load in a field lower.

We are working with the U.S. to develop a predictive model for tar spot development, similar to the white mould app, called the Tar Spotter app. The app will help increase awareness of the development of the disease, and help guide the decision for fungicide application.

There are still a lot of unknowns about the disease, but it is here and will likely continue to spread. Scout for the disease, pay attention to the weather, and manage accordingly. Be aware of the disease but don’t fear it.