Dry conditions were a concern for farmers in parts of Western Canada throughout seeding and into the start of the growing season. Precipitation at the start of the growing season was well below average, and although much of the Prairies have received some precipitation throughout May, lower-than-normal soil moisture continues to be a concern. Dry conditions did allow producers to begin planting early, with provincial reports indicating that seeding progressed at a relatively fast pace.

In Eastern Canada, at the time of seeding, soil moisture conditions were considered below normal in much of Ontario and southern Quebec, also due to lack of precipitation. 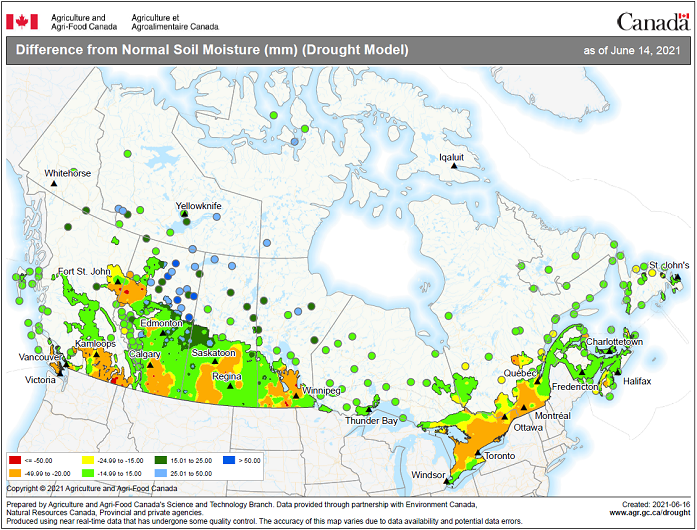 Difference from normal soil moisture (in millimetres) (drought model) as of June 14, 2021 (during the collection period), compared with annual average, by province. Map courtesy of AAFC.

Canadian farmers reported planting 23.4 million acres of wheat in 2021, down 6.5 per cent from the previous year. Spring wheat declined 8.1 per cent to 16.5 million acres. Global wheat production is anticipated to increase compared to last year. If realized, higher worldwide production could result in lower wheat prices for Canadian farmers, possibly influencing some to plant less wheat than the previous year.

Farmers in Manitoba reported that total wheat area was down 8.7 per cent to 2.9 million acres.

Canola planting rises across the Prairies

Nationally, farmers reported planting 22.5 million acres of canola in 2021, up 8.2 per cent from a year earlier. High global demand for oilseeds likely contributed to farmers’ decision to plant more canola. Increased demand has resulted in record high exports as of March 2021, resulting in lower canola stocks. High demand, coupled with decreasing supply, pushed prices to record highs in the first half of 2021; prices are anticipated to remain high for the coming year.

Saskatchewan farmers reported planting 12.1 million acres of canola, up 6.9 per cent from a year earlier.

Farmers in Manitoba reported that canola area was up 1.0 per cent to 3.4 million acres.

Manitoba led the increase in soybean area, up 14.5 per cent from a year earlier to 1.3 million acres in 2021 — the first soybean area increase in the province in four years. Strong prices stemming from high demand for oilseeds and higher yields in 2020 compared with the last three years may have encouraged some farmers to increase soybean acreage.

Barley planting up from a year earlier while oats decline

Nationally, farmers reported that corn for grain acreage was down 2.5 per cent from a year earlier to 3.5 million acres in 2021.

In Ontario, where more than 60 per cent of Canada’s corn is grown, seeded area fell 2.0 per cent to 2.1 million acres.

Canadian farmers reported planting 4.3 million acres of lentils in 2021, up 1.7 per cent from a year earlier.


Related
Principal field crop stocks as of March 31, 2020
StatsCan publishes field crop stock data for the end of 2019
Stocks of field crops down from 2017
Farmers expect to plant more wheat, corn and oats in 2020