Since 1975 the increase in herbicide-resistant weed cases has been fairly consistent, similar to global trends. In Western Canada, there have been about one and a half new, unique cases every year since 1975 when the ACCase or Group 1 Hoe-Grass herbicide came onto the market. In 2016, there are just over 60 cases, and Canada is number three globally in terms of the number of cases. (See Fig. 1.)

Breaking it down by province, the number of cases between Eastern Canada and Western Canada is quite similar. Ontario has 35 unique cases of herbicide resistance, Alberta 23, 20 in Saskatchewan and 22 in Manitoba. British Columbia has one and Quebec has three cases.

We’ve done herbicide-resistant surveys since the mid-1990s, and we were one of the first regional areas that conducted a regular systematic survey. Since the baseline survey that we did in the early 2000s, we documented that just under 50 per cent of all the cultivated land on the Prairies had resistant biotypes. The 2007 through 2009 survey estimated 24.4 million affected acres (see Table 1).

Agriculture and Agri-Food Canada (AAFC) is currently conducting a new round of surveys. Saskatchewan is completed and we’re planning to do Manitoba in 2016. I would expect the numbers will be around 38 million acres of weed infestation with resistance. The estimated cost is about $1.1 to $1.5 billion a year in terms of increased herbicide use and decreased yield.

A breakdown of the types of resistant biotypes shows 75 per cent of resistance is in wild oat, which is our most important weed species. There are also a number of Group 2 (ALS) resistant broadleaves. We expect those numbers to be quite a bit higher when the latest round of weed surveys are completed.

Group 1 resistance in wild oat is everywhere. From 2007 to 2011, there were 600 cases; but just over the last three crop years, we’ve had about 360 more cases. Growers are now submitting samples to find out which Group 1 herbicide still works on a field. They are at the stage that some of the Group 1 chemistries have failed, and they want to know if there is a chemistry in the Group that may still be effective. (See Fig. 2.)

Becoming more problematic is Group 1 and Group 2 resistance. We estimated about 20 per cent of land across the Prairies has this multiple resistant biotype. This really reduces herbicide options. In 2012 through 2014 there were 89 new cases reported.

Back in the 1990s we had a population from Manitoba with multiple resistances to Groups 1, 2, 8 and 25 – ACCase, ALS, triallate (Avadex) and flamprop (Mataven). We determined that it was metabolic resistance.

Our most problematic broadleaf weed is cleavers, but it could be tied with kochia. Based on submission of samples, 38 new cases of Group 2 resistant cleavers were reported in the last three crop years, similar to 2007 to 2011. It is all across the Prairies.

In Western Canada, kochia is the only weed confirmed with glyphosate resistance (Group 9). Today, we estimate just over 100 cases in Western Canada, but again this is based on 2012-2013 surveys. It will be interesting to see how fast it spreads from the original areas. It has been found in lentil and canola fields in addition to chemfallow.

We did a study at the AAFC research farm at Scott, Sask., with the help of Eric Johnson, and also at Lethbridge, Alta., with Bob Blackshaw. At each site, 12 kochia tumbleweeds were fitted with GPS collars and let loose in the wind. Seed drop and distance travelled were measured. The amount of seed drop increased as the distance increased up to one kilometre. At the maximum distance, there was about 80 to 90 per cent seed dropped. That is about 100,000 seeds dropped by each tumbleweed. As the speed of the tumbleweed increased, more seeds were dropped as well.

Kochia is also an out-crossing weed, so its resistance can move with pollen. In a pollen movement study in Saskatoon, we found a sharp drop-off in pollen movement with distance. There was about 7.5 per cent out-crossing on average, very close to the glyphosate resistant kochia, but out-crossing still occurred at 96 metres. If we had measured out to 200 or 300 meters, I think we would have picked up some level of out-crossing at a low frequency. There was a strong directional influence that was well correlated with the wind direction.

Herbicide-resistant canola crops with Roundup Ready and Liberty Link systems have become a basis for weed management in Western Canada to manage Group 1 and Group 2 resistance in grass and broadleaf weeds. Today, varieties with glyphosate and glufosinate stacked traits are now available. Generally, I’m in favour of stacked trait crops because it gives growers another tool to manage their weeds. Of course, the devil’s in the details in terms of stewardship, but we have to give growers all the tools they need to manage resistance.

The Roundup Ready2 Xtend soybean system with glyphosate and dicamba (Group 4) stacked traits is now available in Western Canada. There is also the Enlist soybean system with glyphosate and 2,4-D (Group 4) but it’s not yet commercialized. These stacked systems are relying on the Group 4 synthetic auxins to a large extent to control resistant weeds.

Looking at Ian Heap’s weedscience.org website, out of the 32 biotypes with Group 4 resistance, there are 27 broadleaf weed resistance cases and five grass species resistant to quinclorac. The aster and mustard families account for 40 per cent of the broadleaf weed cases. They seem to be predisposed in terms of herbicide resistance. Inheritance is usually by a single dominant gene, which is the risk factor for rapid resistance evolution. We have various classes of synthetic auxins and cross-resistance among the classes is generally unpredictable, so we almost have to test every class for resistance.

Our latest confirmed case of resistance was found in late 2015 in southern Saskatchewan. The wheat field had Group 2 ALS and Group 4 synthetic auxin resistant kochia. The field had kochia everywhere. This population wasn’t only resistant to dicamba but also fluroxypyr, which is a key active used in various crops. We didn’t suspect glyphosate resistance but there is glyphosate resistance in kochia very close by; so given what we know of kochia gene dispersal, we will soon find three-way or four-way kochia resistance. This Group 2+4 biotype has been found in the northern United States for a number of years so it really shouldn’t be a surprise that we found it.

I can’t say enough about monitoring. We really have to keep our eyes open, and I also appreciate growers and industry submitting samples for testing because the field surveys miss a lot of the early cases. Certainly wild oat, cleavers and green foxtail are at risk of glyphosate resistance, so again that’s where monitoring and early detection comes into play. 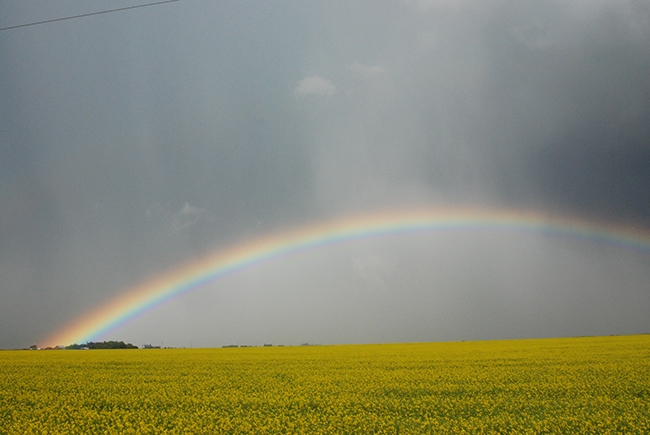 There isn’t a magic bullet coming to help deal with herbicide resistance. Since 1975 the increase in herbicide-resistant weed cases has been fairly consistent