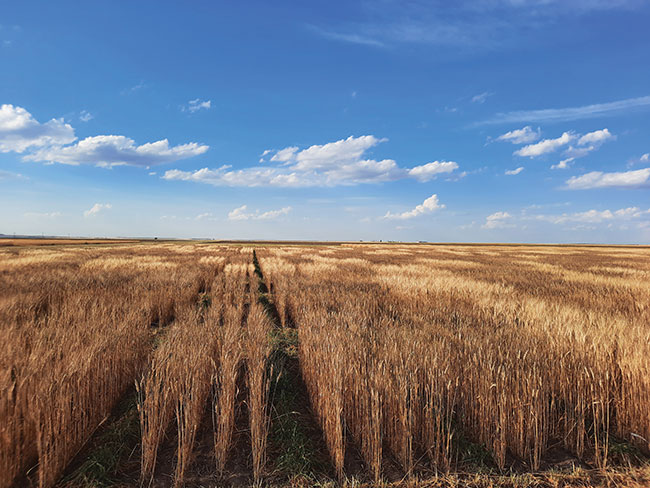 Ruan’s project is measuring how different durum lines perform in terms of yield and protein level to help in identifying genes favoured for high protein when yield increases. Photo courtesy of Yuefeng Ruan.

High-protein grain is key to end-users of durum wheat, and high grain yield is key to durum growers. So breeders want to increase both of these multi-gene traits in their varieties. But progress on this dual goal is slow with conventional crossbreeding methods, especially given that offspring of any cross are the chance recombinations of the genes of the two parents.

Ruan’s three-year project, which started in 2021, involves using genomic and genetic approaches to overcome these difficulties.

Right now, Ruan and his research group are working on the project’s first objective, which is to identify genes that are favoured for high protein when grain yield increases.

To do that, the researchers are ‘phenotyping’ two durum populations – measuring how the plants actually perform in terms of grain yield and protein concentration, when grown at different locations and in different years. As well, they are using molecular tools to ‘genotype’ these populations – determining their genetic makeup.

Next, using the genotype and phenotype data, Ruan’s team will conduct a deeper genomic analysis to identify the favoured genes.

Then, the researchers will tackle the project’s second objective, which is to a develop a breeder-friendly marker for each of these favoured genes.

Such markers allow breeders to screen the DNA of different lines to identify the lines that have the target genes. Using markers is much more efficient and reliable than having to take months to grow the seeds into mature plants and then evaluate the resulting grain for yield and protein.

Ruan notes that the results from this project have the potential to provide both economic and environmental benefits.

“First of all, durum grown in Canada has a reputation for high quality, enabling Canada to be a leading exporter of durum. Through this study, we want to increase yield while keeping the same high level of protein as you find in the best high protein durum varieties. So durum growers will get more yield and more returns from their investment when they grow durum, and international markets will continue to import Canadian durum, which will also indirectly benefit growers,” he explains.

“Another thing is that when grain yield is increased while keeping a high level of protein that means the crop’s nitrogen-use efficiency is higher. The producer gets more yield at the same or higher level of protein for the same amount of nitrogen fertilizer applied to the field.”

This project is funded by the Saskatchewan Wheat Development Commission and the Alberta Wheat Commission. 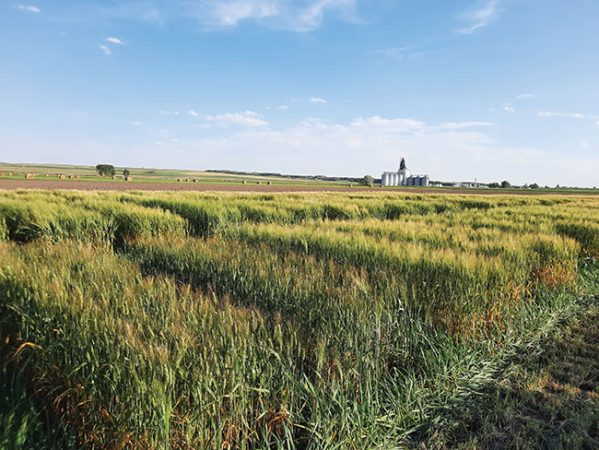 Along with high yield and high protein, Ruan’s durum breeding program has several other key objectives such as drought and heat tolerance and FHB resistance.
Photo courtesy of Yuefeng Ruan.

And of course, the program’s elite lines include many other valuable traits to meet the needs of growers and buyers. Examples include: good standability, resistance to various other important diseases, low cadmium concentration, higher yellow pigment concentration, good milling properties, and so on.

Over the past decade, about 16 lines from Ruan’s program have become commercial varieties – an impressive achievement.

He highlights three of the program’s latest varieties, which are currently in seed production or just newly available to commercial growers.

“AAC Schrader has very good FHB resistance; FHB is the most important disease issue in durum.” He notes that other durum varieties are rated as susceptible or moderately susceptible to FHB, a fungal disease that can produce toxins that limit the end-uses of the grain. AAC Schrader (licensed to FP Genetics in 2021) is the first durum variety in Canada and globally to have intermediate FHB resistance.

As well, AAC Schrader is a high-yielding, high-protein variety with good packages for resistance to other diseases, and good straw strength.

“AAC GoldNet has high yield and high protein content, so it has high nitrogen-use efficiency.” Other features of AAC GoldNet (licensed to SeedNet) include good standability and a good disease resistance package.

“What I really like about my job is to see the new varieties from the breeding program growing in farmers’ fields,” Ruan says. He explains that these varieties represent the fruit of many years of targeted efforts to tackle the priority breeding issues identified by stakeholders.

“In my program, I focus on breeding new durum varieties as well as doing research to generate new knowledge, to develop new approaches through genomics and phenomics [the study of phenotypes] that assist with variety development.”

He adds, “Another thing I like about my job is that it gives me the opportunity to engage with stakeholders and work with other scientists and other breeders toward the shared objective of developing new varieties to benefit the Canadian durum industry.”

He emphasizes, “Industry support is critical for breeding. Without their support we couldn’t be successful. In return, our breeding program is able to deal with the big issues that are impacting the industry.”