Working out the details for effective, efficient and safe drone application of herbicides 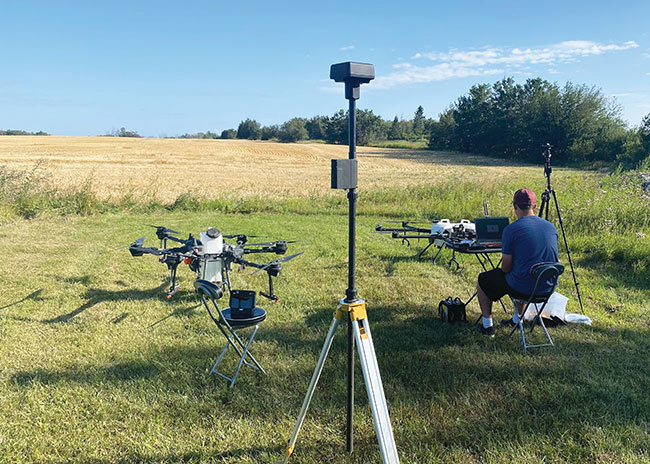 “One benefit of drone application for any patchy weed is that, if you can apply just to those areas where the herbicide is needed, then you are spraying fewer acres,” says Markus Weber, president of LandView Drones Inc. He is leading a research project on drone spraying of Canada thistle patches.

“The other benefit is that potentially you can time the application better for some weeds where the standard herbicide timing may not be ideal. Canada thistle is one of those weeds; it makes some sense to hit Canada thistle a little later than the rest of the weed profile.”

Along with developing practices and procedures for Canada thistle control by drone applications, Weber is hoping that the research data from this project could contribute more generally towards enabling this pesticide application method, which is not yet allowed in Canada.

“Interest is high amongst growers in using drones for herbicide applications, so there is a need for evidence that it is safe and effective,” Weber says.

In addition to the research work, the project is delivering information and training to Alberta farmers and to several Lakeland College summer students, who are assisting with the project’s drone operations.

Alberta’s Results Driven Agriculture Research is the project’s main funder. The project has various collaborators that are providing expertise, in-kind support and/or funding, such as Precision AI, Parks Canada, Corteva and Lakeland College, along with the project’s farmer co-operators Weyga Farming and Timik Farms, who are allowing the drones to operate in some of their fields.

The bigger picture
Drone application of pesticides represents a new application method for Health Canada’s Pest Management Regulatory Agency (PMRA). Both the PMRA and Transport Canada consider drones to be aircraft, yet current pesticide product labels that include aerial application are for applications by manned aircraft, not drones. The Health Canada website states: ‘Parties interested in using this new method of application need to work with [product] registrants who must submit label amendment applications to PMRA, along with sufficient data to characterize the hazards/risks associated with this use.’

“To date, no label amendment applications for the use of drones for pesticide application have been submitted for approval in Canada. As such, no pesticides, including herbicides, can be applied via drone under usual label uses. However, there have been a number of Research Authorizations granted for experimentation with drones,” notes André Gagnon, a media relations advisor for Health Canada.

He adds, “Health Canada has received many inquiries from applicators, grower associations, manufacturers, and registrants regarding the potential for applying pesticides, including herbicides, by drone in Canada. We are actively involved with many working groups, such as the Organisation for Economic Co-operation and Development (OECD) Subgroup on Drones and the North American, industry-led Remotely Piloted Aerial Application Systems (RPAAS) working group, to determine appropriate data requirements for government regulators to assess the value and risks, to humans and the environment, from applications via drone, and provide input and advice on data generation for these data requirements.”

Health Canada has drafted data requirements for this, but the requirements may change as more information becomes available on drone application technology.

Weber’s project has a Research Authorization for drone application of Lontrel XC to control Canada thistle in annual crops and in pasture. He says, “Our Research Authorization from PMRA requires that we give PMRA the evidence we collect. So we are doing the research and documenting our findings, and hopefully opening the path for drone application of other herbicides as well.”

Assessing two sprayer systems
In 2021, the project’s first year, Weber and his project team primarily focused on becoming familiar with using the sprayer technology. He notes, “We did a lot of upfront work like figuring out how to calibrate the width of a sprayer, looking at the spray patterns and getting the distribution accurate, looking at droplet sizes and different water volumes, and all those types of things.” 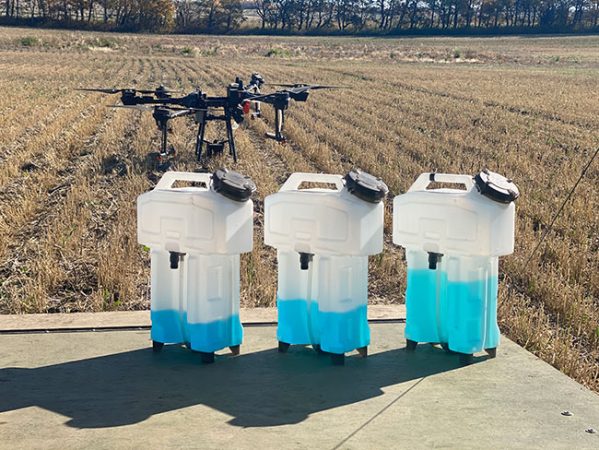 The project is evaluating the effects of various factors, such as different water volumes, on the efficacy of Lontrel.

The team made drone applications at two locations, one in an annual crop and the other in a pasture, and compared drone sprayers from DJI and Hylio.

“We have DJI’s Agras line. DJI manufactures a T10, a T20 and a T30. That loosely refers to the tank size: the T10 is an eight-litre model, the T20 is a 20-litre model, and the T30 is 30-litre model. We don’t have the T30 yet, and as soon as you get above the T10, there are [Transport Canada] regulatory issues. So, much of our research will likely be using the smaller equipment,” he says.

“We also had the Hylio AG 122, which was contributed by one of our collaborators. It is very comparable to the Agras T20 in terms of its size.”

The DJI and Hylio systems turned out to be quite similar to each other. “They are both well-refined systems,” Weber says. “We were very pleasantly surprised with the accuracy of all of the flow meters on the equipment. And there are things like pulse width modulation already built in so you can get high flexibility in water volumes.”

According to Weber, both types of drone systems are used for spray applications in other countries. “In Canada, we are far behind in terms of adopting these technologies. Part of that is because our regulatory bodies are very careful, and of course that is a good thing for food safety as well as environmental and human safety. But other countries have adopted drone spraying technology much more rapidly. Some Asian countries have a decade of use of this type of equipment, whereas it’s just starting here. The United States is also considerably ahead of us.”

Weber was surprised at the relatively large spray widths achieved by the drones. “With the Agras T10 to T30, the spray widths are between five and nine metres per pass. Even though the equipment is only about 2.5 metres wide, you get about a seven-metre-wide pass. That is because you are spraying into very turbulent air,” he explains.

“All the models we have used so far have the nozzle underneath the propeller. Some other models have a boom attached either out front or out back of the drone. But either way, the air is very turbulent. These are about 25- to 75-kilogram machines and their propellers are creating a lot of vortexes. And that is both an opportunity and a barrier potentially.

“The opportunity is that the turbulent air is distributing the droplets and pushing the droplets into the crop canopy. So penetration and distribution are very good and wide.“The potential downside, especially with small droplet sizes and all that turbulent air, is the risk of spray drift. That is one area where we really need to do some work in 2022.”

LandView summer staffer Bianca Weber with the Agras 20, one of the drones used in the project.

Thistle mapping
The project team in 2021 also developed the workflow and algorithms for creating a prescription map for drone spraying – mapping fields, identifying Canada thistle patches, differentiating Canada thistle from other weeds, and so on.

First, they map the Canada thistle patches within a field using a lighter drone with a multispectral camera. This mapping work takes from 45 to 60 minutes for a quarter section, including the processing time. Then, they use a sprayer drone to apply the herbicide according to the prescription map. “You preprogram the area you want to fly. Then you hit start and watch the drone apply,” Weber says.

“You still need an operator there for two reasons. One is to refill the water and change the battery. The second is for safety reasons. Transport Canada requires that you have visual line of sight of the drone at all times so you have to be physically present when you are applying. That makes sense because there are other competing users of the air space, such as crop dusters, and you want to make sure they are safe. Aside from that, the drone is fully autonomous.”

He notes that, in the future, weed identification and spraying will not require two separate drone operations. “Various companies, including our collaborator Precision AI out of Saskatchewan, are working on true see-and-spray technology where there is a real-time decision on whether to turn an individual nozzle on or off. Although that technology is not far off, there isn’t the ability to do that right now. One of the reasons is simply putting the computing power on board of a small drone.” 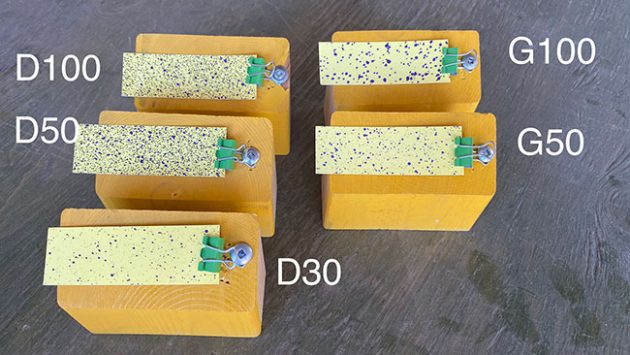 Coming up
In 2022, the project team will mainly work on evaluating the efficacy of the equipment, carrying out spray drift trials, and developing best practices for patch spraying by drones. They plan to conduct their field trials at about 15 locations, including pastures and a variety of annual crops.

“This year, we’ll also be hosting some drone sprayer clinics so farmers can learn how to calibrate these systems,” Weber notes. “Currently, they can’t use drones to commercially apply herbicides, or pesticides of any kind, but they can use drones for other applications like applying fertilizers or seeding cover crops.”

As well, he is encountering a lot of farmer interest in using drones for brush control in pastures, so he and his team hope to put together a project on that.

Looking into the future, Weber sees good potential for widespread use of drones for spray applications. “There is still one big technology limitation and that is the energy being used. The drones currently are all being powered by batteries. Those require frequent changes and that also limits your payload ability; that’s why we only have 10-, 20- or 30-litre models as opposed to 200-litre models. But those are hurdles that can be overcome.”