Fababean has received increasing attention – and research dollars – over the last five years. Two new studies in Saskatchewan, working in tandem with the University of Saskatchewan’s breeding program, aim to develop best practices for the crop, and the timing couldn’t be better.

In 2015, more than 100,000 acres were planted to fababean in the province. A string of disappointing years have left pea growers looking for a replacement rotational pulse, and fababean is a good fit. But it’s also a booming business in its own right.

“Les Henry once told me, ‘Fababean is the only crop that will stand up and look you in the eye at harvest,’” says Bert Vandenberg, professor and Natural Sciences and Engineering Research Council (NSERC) Industrial Research Chair at the University of Saskatchewan.

“Peas have had tough times in the rough years, but fababean can take a lot of moisture and doesn’t get root rot,” he says. “And fababean stands up at harvest. Farmers love that. You can combine more fababeans per hour than peas. It’s a farmer-friendly crop.”

In addition, fababean has higher nitrogen fixation and higher protein than pea and lentil.

Vandenberg is the head of the fababean breeding program at the University of Saskatchewan. Since he took over the fababean portfolio more than a dozen years ago, investment in the crop has slowly begun to ramp up with the increase in acreage.

Breeding objectives have shifted over the years based on resources, but the first priority of the program was to develop small-seeded varieties that won’t plug up farmers’ air drills or require special equipment. Most breeding projects also seek to develop varieties with high yield and good seed quality.

“What we need to work on is disease resistance for chocolate spot. That’s a high priority right now,” Vandenberg says.

Over the next few years, Prairie growers will start to see the products of the breeding program – zero-tannin varieties, which work well as feed, are already being released. In a few years, low vicine varieties will follow.

“We’re probably behind where we should be, but now the investment is going to come,” Vandenberg says.

One study, led by Garry Hnatowich, a research director at the Irrigation Crop Diversification Corporation (ICDC), aims to determine the effects of two inoculation formulations: a peat-based inoculant and granular treatment at differing rates, and in combination with one another, on fababean growth.

A secondary focus of the study will look at whether tannins, which are naturally found in most fababean varieties and have some antibiotic properties, diminish the effectiveness of inoculants.

“Of the pulse crops, fababeans are far and away greater fixers of atmospheric nitrogen than any of the other pulse crops, so more of their nitrogen requirements can be met through fixation, as opposed to relying on soil or fertilizer nitrogen,” Hnatowich explains. “Fababeans will fix about 90 per cent of their nitrogen requirements, as opposed to 70 to 80 per cent in pea crops. We want to know the best way of getting to that number.”

The three-year study, which began in 2015, will take place on eight participating sites across all of Saskatchewan’s climatic regions. The study is funded by the Saskatchewan Pulse Growers Association.

“Because the interest in fababean was low historically, there’s been relatively little agronomy,” says Hnatowich. “The hope is that agronomic services will leap up to meet this demand.”

Another study, led by University of Saskatchewan professor Steve Shirtliffe, aims to analyze seeding rates and fungicide efficacy. This study, which will also run for three years, began in 2015, so no results have been released as yet.

“There have been trials over a period of 30-odd years looking at seeding rates in Saskatchewan. But they conflict,” says Hnatowich, who is collaborating with Shirtliffe on the study. “None of the trials really came up with an answer on seeding rate, and this may have been due to the short-term nature of the trials, or limited locations.”

In Shirtliffe’s study, 20, 40, 60, 80 and 100 seeds will be planted per metre in each plot over a wide range of locations, at up to six sites in Saskatchewan. The second part of the study will analyze the efficacy of four different foliar fungicide treatments – Bravo, Priaxor, ProPulse and Vertisan – in tandem with seeding rate. “Fababeans are prone to some foliar diseases: chocolate spot (botrytis) is a problem in the province not infrequently, as is ascochyta. And these two diseases are often problematic under irrigated conditions,” Hnatowich says.

The ability of fababean to cope well in high moisture conditions makes it unique, and desirable, especially as pea acreage continues to decrease in Saskatchewan.

“Farmers are interested in fababean because it’s a pulse crop that fits back into their rotational strategy,” he says. 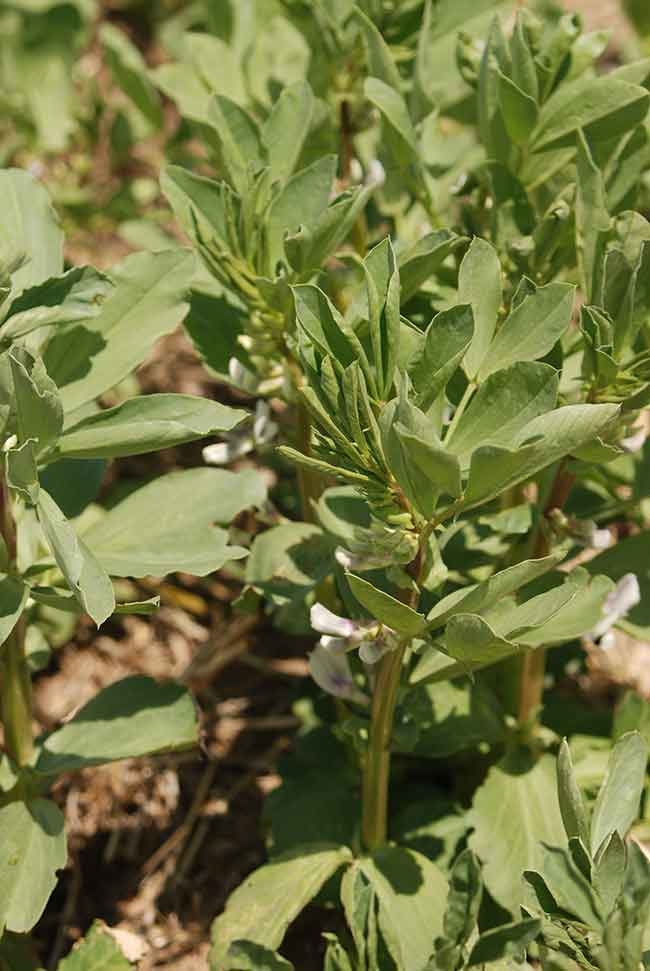