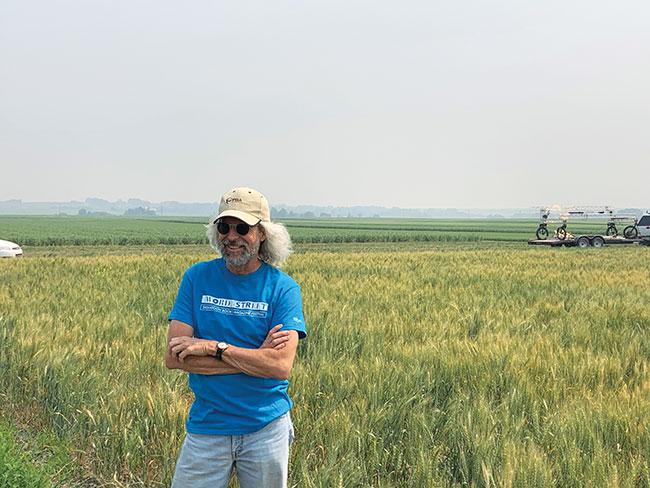 University of Saskatchewan’s Randy Kutcher and his team have developed a new toxin testing platform for identifying mycotoxins in cereals. Photo courtesy of Lipu Wang.

Fusarium is a major economic threat for wheat and other cereal grains, not only because of the significant losses caused by infection, but also because of the production of harmful mycotoxins that can limit the end-use of harvested grain. Deoxynivalenol (DON), a mycotoxin, can cause significant harm to both animals and humans and has strict regulatory limits for sale into food and feed markets. Breeding for low-DON concentration in cereal crops is an important control measure for the disease, and researchers have developed new innovations to speed up screening and detection.

“In our research program, Fusarium in wheat and other cereals is a major priority,” says Randy Kutcher, plant pathologist and strategic research chair in cereal and flax pathology at the University of Saskatchewan. “Our efforts are focused on facilitating the cereal breeding program at the Crop Development Centre (CDC) in the development of Fusarium-resistant and low-DON accumulation varieties, and the use of integrated pest management (IPM) best practices to manage the disease. Our lab has recently developed a new toxin testing platform that is faster and more accurate than assay methods currently in use, and should prove to be a significant advantage for our plant breeding programs and plant pathology activities.”

This new high-throughput DON-testing method is simple, fast, efficient and less expensive than existing LC-MS/MS-based mycotoxin detection methods. Instead of running three samples per hour, this new method is capable of running a sample every two minutes, increasing the efficiency of screen large numbers of samples. Customized for wheat breeding programs, this method should significantly speed up the screening process for DON, reducing time and costs.

Wang adds they have achieved speed and efficiency while maintaining high accuracy and high sensitivity, following strict validation methods for every step. This new method is more accurate and more sensitive compared to existing measures that are currently being used, and can detect very low concentrations of mycotoxins in grain samples. The method is being expanded to other cereal crops, such as barley, oat and canaryseed.

“We currently have collaborations with about 10 labs across Western Canada, including various universities, provincial and federal government labs,” Wang says. “We are working with several wheat and cereal breeding programs, but also food science and soil science labs. Along with grain sample testing, the protocols and assays we developed have a wide application and can be used to test mycotoxin levels in any contaminated samples, including soil, food and feed. We are in discussions with some startups and commercial companies interested in potential collaboration opportunities.”

Building on this successful method launched in 2019, Wang has developed a secondary platform to detect and quantify multiple mycotoxins simultaneously. “Fusarium produces several other mycotoxins besides DON that are important considerations in disease management,” Wang says. “We have developed a second multiple-mycotoxin quantification assay that can detect multiple mycotoxins in one sample test and analysis. So far the assay includes seven different mycotoxins in wheat, and we are continuing to expand the mycotoxin diagnostic library. This assay is very useful to plant pathologists for monitoring mycotoxin types in Western Canada and the mechanisms of pathogen infection.”

For example, in Western Canada plant pathologists are seeing a significant shift from one type of mycotoxin to another, with the dominant chemotype 15-ADON shifting to the more virulent and aggressive 3-ADON chemotype. By understanding the shifts and trends in mycotoxin types, plant pathologists can help growers and industry understand the dominant chemotypes of the pathogen. This multiple-mycotoxin test will help plant breeders and industry respond more quickly to changing and emerging disease threats.

“We are working with several research colleagues who are using the method and continue to validate the system for accuracy,” Kutcher adds. “We have submitted a paper for publication that will make the method generally available to anyone who wants to use it. The LC-MS/MS equipment is standard, although expensive, but anyone with access to the equipment can use our new method for screening DON or multiple mycotoxin analysis.”

The new methods are also providing the foundation of an innovative machine learning collaborative project underway at the University of Saskatchewan. The DON and multiple-mycotoxin assays are being used to help develop and validate a new machine learning and artificial intelligence prototype to assist with screening Fusarium damaged kernels (FDKs). “We are leading the project in collaboration with the Computer Science and Mechanical Engineering departments at the university,” Wang says. “The goal is, through artificial intelligence and machine learning, to develop a software-enabled machine that is able to automatically recognize, sort and screen FDK infected kernels. Our lab and methods are making sure the system is consistent and accurate, and ultimately a useful tool for cereal researchers, industry and growers.”