Top Crop Manager has been keeping an eye on soybean rust ever since the pathogen’s spores first blew into Ontario in 2007. Those spores were captured at monitoring sites in one of the largest crop disease monitoring efforts in North America to date. This soybean rust monitoring system has helped researchers, crop advisors and growers to get a better handle on the disease.

So far, soybean rust has not caused problems in Canada, in part because monitoring has contributed to more effective control measures in the United States. On top of that, the monitoring program has laid the foundation for developing a Canadian system that could monitor the full range of airborne fungal spores and bacteria, as an early warning system for diverse pathogen concerns.

“When soybean rust was first detected in late 2004 in the southern U.S., it was really of great concern,” Sarah Hambleton of Agriculture and Agri-Food Canada (AAFC) in Ottawa says. She explains the pathogen was already known to be both invasive and aggressive. Since its discovery in Japan in the early 1900s, the pathogen had spread to other Asian countries and then to Australia, Africa and South America, and had shown its ability to cause devastating yield losses when conditions favour the disease.

“Also, we understood a lot about how rusts can be disseminated; the spores can be carried in air currents over very long distances and remain viable. And we knew soybean rust was well established in South America. So we knew there was a potential for the pathogen to come to North America and cause a lot of yield loss if the environmental conditions were suitable.”

When soybean rust was found in the U.S. in 2004, plant pathologist Albert Tenuta with the Ontario Ministry of Agriculture, Food and Rural Affairs (OMAFRA) was ready. In OMAFRA’s regular weekly scouting to monitor for crop diseases, watching for soybean rust became a high priority, and Tenuta started providing soybean rust information and updates to growers.

In addition, he asked Hambleton if she wanted to get involved in doing molecular diagnostic testing for the pathogen. So, in a collaborative effort with support from the Grain Farmers of Ontario, OMAFRA, AAFC’s Pest Management Centre and others, Hambleton set up automated equipment to collect air and rain samples at OMAFRA scouting sites and other locations. On a weekly basis, the crop scouts or collaborators on site collected the samples and sent them to Hambleton’s lab. Such samples contain airborne organisms, so her lab extracted the DNA from the samples and used a very specific real-time PCR test to quickly determine if soybean rust spores were arriving at the monitoring sites. She says, “In 2006, we ran trials with the collectors, and in 2007 we were operating.”

The Canadian monitoring effort came together with efforts in the U.S. and Mexico to form the North American Soybean Rust Monitoring Network. This international initiative involves field scouting, spore trapping, DNA-based screening, predictive modelling and extension to soybean growers. The field scouting includes sentinel plots (soybean plots planted earlier than the local commercial soybean fields), commercial fields and patches of kudzu (an invasive legume that can be a winter host for the pathogen in areas with very mild winters). The network’s public website (sbr.ipmpipe.org) provides near real-time maps of the monitoring results, as well as information about managing the disease.

In Canada, the monitoring work involved nine sites in Ontario, including one on the roof of the University of Toronto’s Earth Sciences Centre, two in Quebec with support from the Quebec Ministry of Agriculture, and one each in Manitoba, Saskatchewan and Alberta, sited at AAFC research stations. Fundamental to the success of the program was the weekly commitment for many years by all collaborators to oversee the sites and collect samples.

“The first time we detected the DNA of the soybean rust spores was in July 2007,” she notes. “Then in October, the team in southwestern Ontario found a few diseased soybean leaves. At that time of year the crop is quite senescent [so the disease did not affect soybean yields]. But it demonstrated to us that the disease could happen here.”

As it turned out, that 2007 detection has been the only time that rust-infected soybean plants have been found in Canada so far, although the spores were detected over the next few years mostly at the Ontario sites.

“However, OMAFRA’s regular field scouting continues, and I maintain readiness here – we would be able to use our specific assays to test and identify any suspicious samples that might be found in the field.”

The monitoring and modelling work has enabled researchers and specialists to get a much greater understanding of the disease, its yield impacts and its spread under North American conditions.

The web-based reporting of monitoring results has provided vital information for extension agents, crop consultants and growers. Hambleton notes, “The website allows people to check and see which areas have been scouted and whether the disease was there.” That information is key for timely fungicide applications – if growers wait to spray until they see the disease in their own fields, then the fungicide application may not be as effective. So the monitoring results have allowed U.S. soybean growers to better control soybean rust. And that, in turn, has helped limit the spore load carried northward toward Canada.

“The disease is established in the southern U.S. and they have [infected] fields every year, but the soybean growers are aware of the disease, and they know how to find it and control it,” she explains.

Just as important, when the monitoring results show that an area is currently free of the disease, then the local growers can avoid unnecessary spraying, which reduces their input costs and helps the environment.

Hambleton adds, “In the early days when everybody in Ontario was very concerned about soybean rust, we were able to say, ‘We’re monitoring and we don’t find it on the ground so you don’t need to be concerned right now about the threat from this disease.’”

She notes that, for the pathogen to cause problems in Canadian soybean crops, we now know that several conditions have to happen at the same time: a heavy spore load in the southern U.S.; big storms that can carry viable spores into Canada; Canadian weather conditions favouring the pathogen’s germination, infection and growth; and Canadian soybean crops in the reproductive stages. Those factors came together in 2007, except the infection occurred very late in Ontario’s growing season. Changing weather patterns could increase the risk of the disease, but the disease would impact Canadian soybean yields only if all the other factors were also present.

From monitoring one, to monitoring many
The monitoring work has also sparked an initiative by a team of Canadian researchers, led by AAFC’s André Lévesque, to develop a system that uses the same type of spore trapping equipment and DNA-based screening for much, much broader monitoring of airborne microbes.

“I work closely with André Lévesque, and we really feel there is a lot of value to this approach,” Hambleton says. “We think we can use DNA extracts from the air and rain samples to look for not just one disease but all the organisms that we can detect if we have the molecular markers to do that. And we are constantly building our databases for reference DNA sequences of different organisms, especially those of importance to agriculture. So I think there is a huge potential.” This approach would be especially valuable for early warnings of airborne fungi and bacteria that are spreading into new regions.

A pilot project on this approach was completed in 2013. Now, Hambleton is a collaborator on a new project that will be using this approach to monitor for wheat rusts and several other airborne diseases in Alberta. “So we will be starting up again, and we’re looking for partners to do more of this kind of work.” 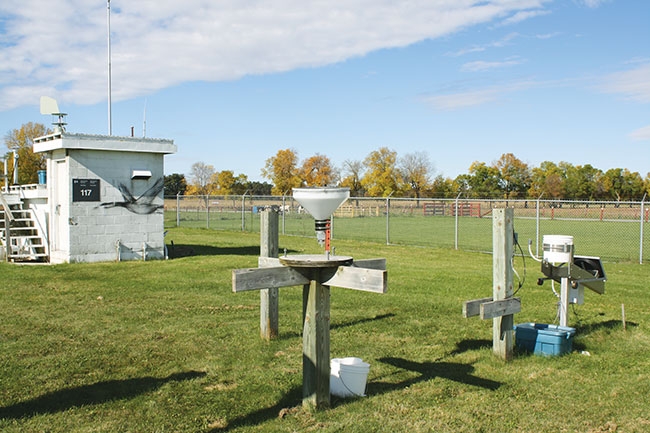 Weekly rain and air samples collected by active and passive collectors were screened for soybean rust DNA. Top Crop Manager has been keeping an eye on soybean rust ever since the pathogen’s spores first blew into Ontario in 2007.
Print this page