Known as the ‘silent yield robber’, soybean cyst nematode (SCN) has challenged Ontario soybean producers since its detection in 1987 in southwestern Ontario and the battle continues today. 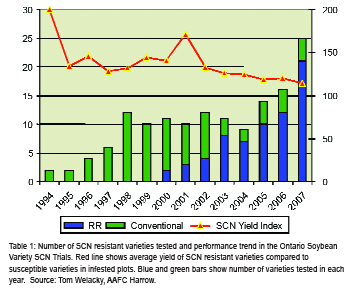 Known as the ‘silent yield robber’, soybean cyst nematode (SCN) has challenged Ontario soybean producers since its detection in 1987 in southwestern Ontario and the battle continues today. Significant achievements have been made during the past decade as researchers and growers alike have been arming themselves against the harmful effects of SCN.

One of the most significant developments in the past 10 years, is how SCN has spread not only into new areas of the province but continues to build and adapt (creating new races) in established areas of southwestern Ontario. Growers and researchers continue to find SCN in new areas of Ontario, such as Bruce and Huron counties and most recently into the Trenton area in 2007, the first time the disease has been confirmed east of Toronto.

“In another 10 years we expect to see the movement of SCN into new areas, likely the majority of Ontario soybean acres will be affected to some degree,” says Albert Tenuta, OMAFRA field crop plant pathologist. Tenuta emphasizes, “Awareness and detection is the first line of defense against SCN and if we can limit SCN build-up in these newly detected areas, SCN economic losses will be kept to a minimum thus maintaining profitability for these producers.”

“Growers today have learned the hard way to respect the potential damage that SCN can inflict on their soybeans and their knowledge is one of our best weapons against SCN yield losses and the continual spread of the disease,” says Tenuta.  Tom Welacky, SCN nematologist for Agriculture and Agri-Food Canada, credits crop rotation methods and SCN resistant varieties as the cornerstone management strategies against the disease, but notes that a new challenge has evolved from this disease as the nematodes themselves have begun to change. “Changes in the races and types of nematodes have resulted in a new direction of SCN research as researchers focus on changing nematode varieties,” says Welacky.

“SCN continues to top the list of grower concerns and research priorities year after year,” says Crosby Devitt, Ontario Soybean Growers (OSG) research manager. In the last decade, OSG has invested more than four million dollars into SCN research. “The ongoing research has aided in the
prevention and reduction of the impact of the disease and we continue to learn more about the disease every year. We are seeing a continued increase in the number of SCN resistant varieties
available to Ontario growers. This can be attributed to breeding advances by both private company and public sector variety development and research,” says Devitt.

In recent years, most of the new SCN resistant varieties also contain the Roundup Ready (RR) gene and “as a result, we have seen fewer new SCN resistant conventional varieties (see Table 1). For example, only four out of the 25 varieties in the 2007 Ontario Soybean Variety SCN tests were conventional, while 21 were Roundup Ready,” Devitt notes. As SCN expands its range of impact throughout Ontario, it will be important to have SCN resistance available in both RR and
conventional varieties in each maturity zone. Significant research efforts are currently underway to develop the next generation of soybean varieties that have built-in SCN resistance. Ontario Soybean Growers is investing in research at OMAFRA, the University of Guelph and Agriculture and Agri-Food Canada to make sure farmers have access to the best tools available.

In Canada, SCN has only been found in Ontario to-date, but efforts continue to survey and monitor the movement in Ontario, Quebec and Manitoba for the spread of the disease throughout the soybean growing regions of Canada. The information we have learned about SCN during the past 10 years in Ontario could be applied to other soybean production areas in Canada. n