Tractors delivered participants to more than 10 sites at the 23rd annual Southwest Crop Diagnostic Day. The event, which took place July 5 and 6, saw agronomists, producers and industry professionals visiting stations across the University of Guelph’s Ridgetown campus to learn about new research and the implications for crops in Ontario.

Here’s a sampling of some of the topics covered.

Peter Sikkema and Darren Robinson (both from UGR) tested participants on herbicide injury in both corn and soybean, respectively. Producers saw first-hand the symptoms caused by new and common herbicides. 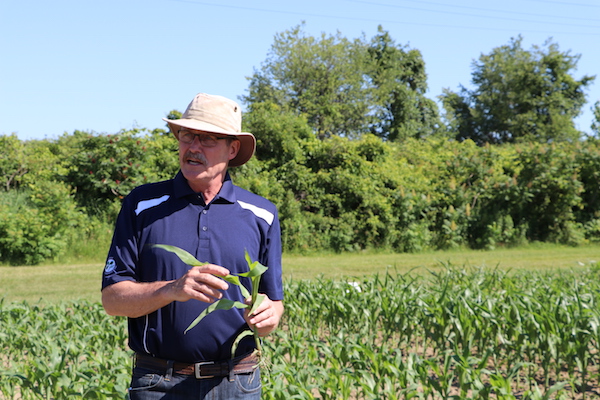 Joanna Follings and Anne Verhallen (both from OMAFRA) talked cover crop seeding rates and options for growers. They highlighted research that indicates underseeding red clover into winter wheat leads to an increase of 10 bushels per acre (bu/ac) for corn and five bu/ac in soybean. 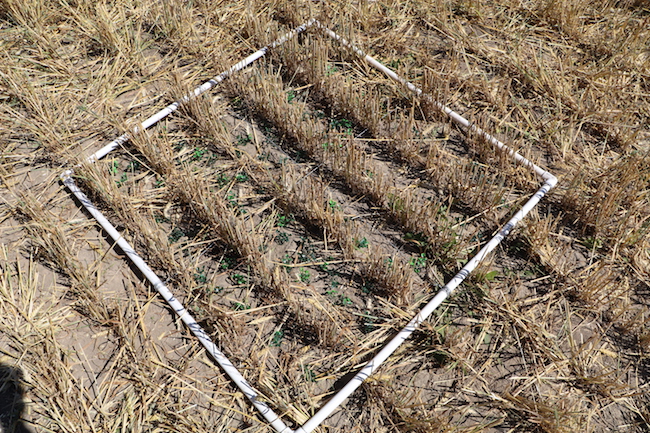 One of the plots of red clover planted at UGR.

There’s also a nitrogen credit of 85 pounds per acre. Follings offered tips for seeding, since the biggest challenge with red clover is establishment. (A uniform stand of three to four plants per square foot is the minimum number to be considered a good stand.) 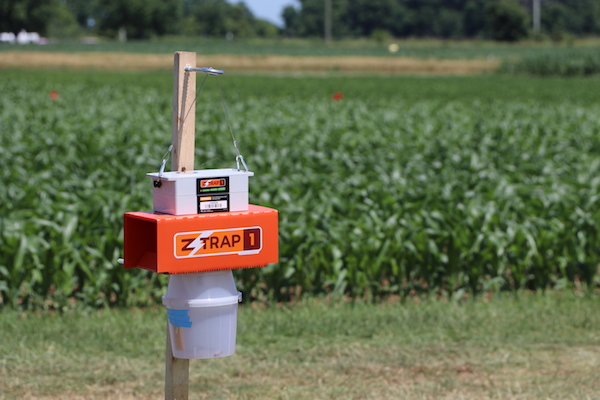 The Z Trap is one of the newest Western bean cutworm traps on the market.

When scouting, DiFonzo says to look at 100 plants (10 plants in 10 different areas, or 20 plants in five areas) every five days when crop is in the pre- to full tassel stages. The threshold to spray is an accumulation of five per cent of plants with Western bean cutworm egg masses or small larvae over a two to three week period.

Dave Bilyea (UGR) covered some lesser-known but potentially problematic weeds for Ontario agriculture. Some of the weeds highlighted include annual bluegrass (which competes with young plants and is tolerant to glyphosate) and dog strangling vine. There aren’t many reports of this vine yet, but it’s very competitive and is toxic to insects and animals, affecting ecology. Another weed to watch is wild parsnip, which makes skin UV-sensitive and results in burns similar to those caused by giant hogweed. With scouring rush (also known as snakegrass), part of the challenge is that the plant has no leaves for contact with any herbicides producers might spray. 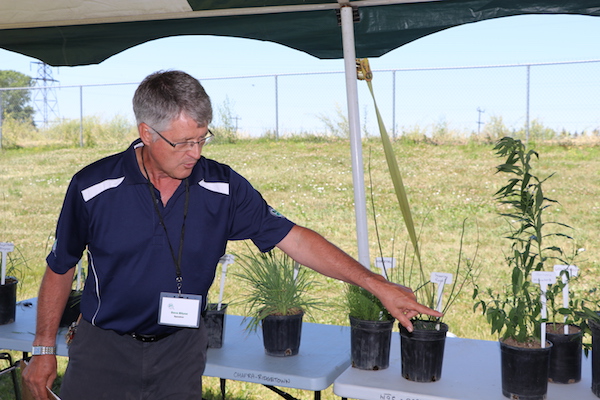 Dave Bilyea explains the similarities between Northern willowherb and goldenrod.

Bilyea reminded growers that they can send in weeds for herbicide-resistance testing free of charge.

Ben Rosser (OMAFRA) and Peter Johnson from Real Agriculture had participants digging up corn plants from a variety of plots to discuss the effects of planting dates, depth and staging. 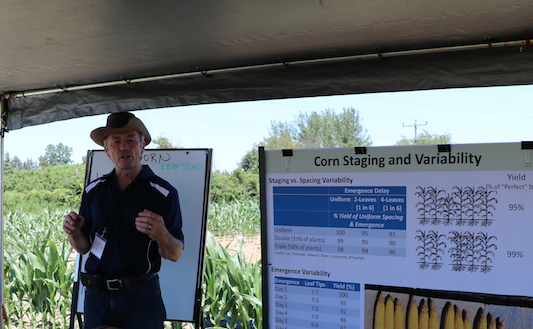 Hail damage in corn was also discussed using the example of a corn plant damaged just a couple of weeks ago. Although the farmer growing the corn in question thought he should plant something else, there was still new growth in the corn and so he was advised to leave the crop; he would likely only suffer a five per cent yield loss from the hail damage.

Jason Deveau and Mike Cowbrough (both of OMAFRA) highlighted the importance of sprayer clean out and compared two different systems: triple rinsing and continuous rinsing. 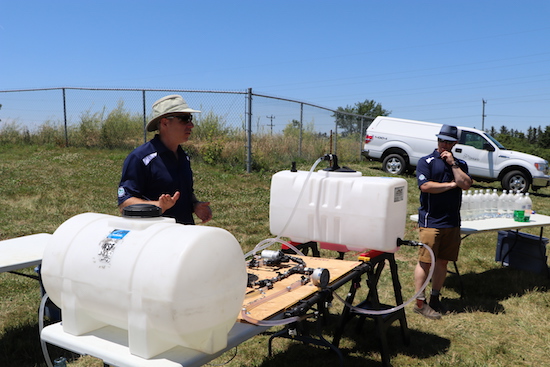 Deveau and Cowbrough explaining how a continuous rinse system works.

Growers walked through soybean and tomato plots and saw the level of injury caused when equipment isn’t properly rinsed between spray applications. Although triple rinsing is effective, it takes three times longer to do; the continuous rinse system is not only faster, but also limits operator exposure. The current challenge is adding the pump on the sprayer equipment due to challenges with the computer operating systems.

Don’t miss out on any research that could help you become a better producer! Sign up to our newsletters to get the latest on enhancing canola growth and yields, the best form of sulphur fertilizer and precision weather forecasting. 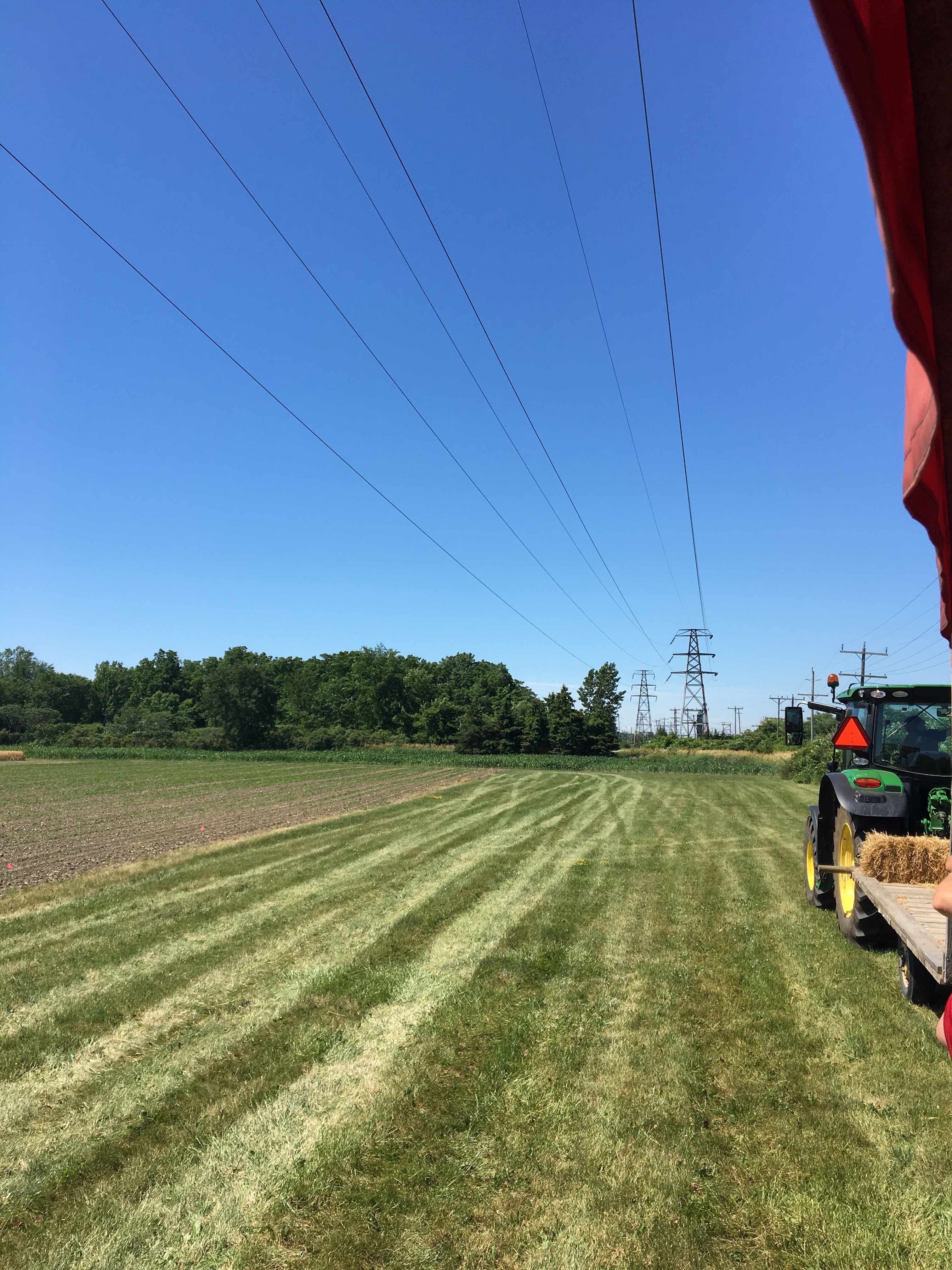