Features Agronomy
Something old, something new

A  comparison of heirloom and modern dry bean varieties is revealing that some heirloom varieties could be good candidates for breeding dry beans with greater nitrogen-fixing capacity. 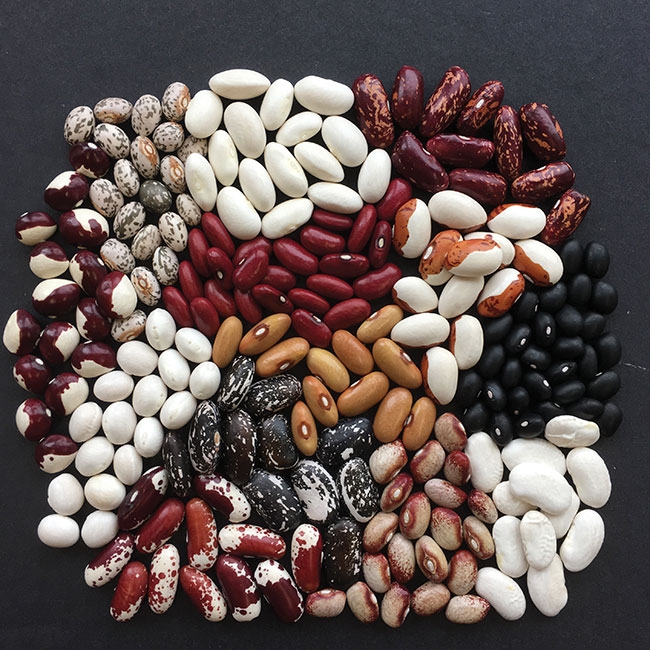 Some of the diversity in seed coat colour and seed size found among the heirloom varieties in Wilker’s study. A comparison of heirloom and modern dry bean varieties

“Dry beans are commonly thought to be poor nitrogen fixers. Other forage and grain legume species can get over 80 or 90 per cent of their nitrogen from symbiosis with rhizobia bacteria. But beans usually fix less than half of their nitrogen,” says Jennifer Wilker, a PhD student in plant agriculture at the University of Guelph.

“So, to obtain a good bean yield every year, producers actually apply nitrogen fertilizer, instead of relying on symbiosis. If we could improve the nitrogen-fixing capacity in beans, then producers could reduce that fertilizer input and reduce those costs, and also reduce the risk of nitrogen losses to the environment.”

Wilker conducted the heirloom/modern comparison as one part of her PhD studies. “The overall goal of my PhD research is to explore the diversity for nitrogen fixation in dry beans, to determine the genes involved with the trait, and to identify genotypes that might be useful for breeding higher nitrogen-fixing varieties.” In the other part of her PhD research, Wilker is using a diverse set of 280 genotypes to investigate the genetics and genomics of nitrogen fixation in dry bean. She is conducting her PhD research with guidance from associate professor Alireza Navabi and professor Peter Pauls.

For the heirloom/modern study, the working hypothesis was that heirloom dry bean varieties might have higher nitrogen-fixing capacities than conventionally bred varieties.

Wilker explains, “The symbiotic relationship between beans and rhizobia is metabolically expensive for the host plant, and the symbiosis is really sensitive to external sources of nitrogen. So, if nitrogen is available in the soil, the symbiosis is reduced in favour of using that readily available soil nitrogen.

“In modern breeding programs, beans are maintained throughout the growing season in just the same way as producers grow their crops, which includes applying nitrogen fertilizer. So, it may be that years and years of selection in breeding programs for performance under this adequate nitrogen environment, where symbiosis would be down-regulated, may have led to selection of bean genotypes that don’t have higher nitrogen-fixing capacities.

“Heirloom genotypes, on the other hand, have been maintained throughout the years, often by backyard enthusiasts or small seed companies, and they often encourage the use of rhizobia inoculants, which would encourage symbiosis. Beans under that production system would benefit from the ability to fix nitrogen from the atmosphere [through symbiosis], and perhaps would continue to carry on that trait from generation to generation.

“So, if beans had good nitrogen-fixing capacity historically, then that trait might have been maintained in heirloom varieties and selected against in modern varieties.”

To carry out the study, Wilker acquired 28 heirloom varieties, encompassing various market classes, from Canadian heirloom seed distributers. And, from the University of Guelph’s seed collection, she obtained 20 standard varieties that had been commercially released between the 1960s and 2015 and represented modern market classes.

Because the study’s heirloom group and modern group both included smaller- and larger-seeded types, Wilker was also able to make comparisons of the nitrogen-fixing capacities of these two size types. She explains that dry bean genotypes are classified into two major gene pools linked to seed size. Genotypes that were domesticated in South America are in the Andean gene pool and are larger-seeded. Genotypes domesticated in Central America or Mexico are in the Middle American gene pool and are smaller-seeded.

In addition to the 48 varieties, the study also included a mutant bean that doesn’t fix nitrogen because it doesn’t form root
nodules with rhizobia bacteria. She says, “We used that mutant as our baseline for the nitrogen levels in the seed and compared all of the other varieties to it.”

The study, which started in 2014, was carried out over two field seasons at two Ontario field locations with low soil nitrogen levels: the Elora Research Station, and a farmer’s field near Belwood. The study team inoculated the beans with a rhizobial inoculant and didn’t add any nitrogen to the plots. They measured various agronomic characteristics such as days to flowering, days to maturity, 100-seed weight, and yield. They used isotope analysis to determine the nitrogen and carbon levels in the seeds, and they calculated the percentage of fixed
nitrogen in the seeds. They also genotyped all the bean varieties and used that data to determine how closely the heirloom varieties were related to the modern ones.

Wilker is currently completing her PhD thesis and she has some interesting results from the heirloom/modern study. From the genetic analysis, she determined that the genotypes in this study are evenly represented between the larger-seeded Andean genotypes and the smaller-seeded Middle American genotypes. She also discovered that the heirloom varieties do not all cluster together as a group of genotypes; instead, some are more closely related to modern varieties than others.

From the analysis of the field data, Wilker found that the amount of fixed nitrogen was positively correlated to days to flowering but not to yield. She suspects the lack of correlation to yield might be because the soil nitrogen level was so low in this particular study that the fixed nitrogen didn’t give enough of a boost to make a significant yield difference.

Looking at the nitrogen-fixing capacity of individual genotypes, she saw some variation in performance from year to year and environment to environment, as would be expected. “But, when we generate the rankings for individual genotypes [averaged across the study’s years and sites], we find that four of the top five genotypes are heirloom varieties. Also, four of the top five came from the Middle American gene pool,” she says.

So, individually, heirloom genotypes dominate the top results for nitrogen-fixation capacity, which is in line with the study’s hypothesis. Wilker adds, “The highest heirloom nitrogen fixer was Coco Sophie, a round navy bean-like variety. The highest standard genotype was Hi N Line, a matte black bean, followed by OAC Inferno, a recently developed light red kidney released by the University of Guelph.”

Some of the diversity in seed coat colour and seed size found among the heirloom varieties in Wilker’s study.

For the standard group, this finding suggests that the nitrogen-fixing trait is not being either selected for or selected against in modern breeding programs. Wilker speculates, “Perhaps the nitrogen-fixing trait is just being carried along [in each generation of plants]. And it may not be an either/or situation – perhaps the fact that the plants perform well with added nitrogen fertilizer doesn’t mean that they can’t also perform well with rhizobia.”

In addition, Wilker’s analysis showed that the smaller-seeded Middle American genotypes had higher nitrogen-fixing capacities than the larger-seeded Andean genotypes. She suspects there may be several reasons for this result; in particular, she notes that the Middle American gene pool has a much broader genetic background than the Andean gene pool, and the narrow Andean pool may not actually contain any particularly good nitrogen fixers.

In the other study for her PhD, Wilker found significant variation in nitrogen-fixing capacity among the 280 genotypes and identified some superior nitrogen fixers. She also identified regions of the bean genome associated with nitrogen fixation.

What do the results from her two studies mean for dry bean breeding? Wilker notes, “Varieties like Coco Sophie, Hi N Line, and OAC Inferno show promise for use in breeding programs to improve nitrogen-fixing capacity in dry bean varieties.”

More than that, she believes gaining a better understanding of nitrogen fixation from a genetic and genomic perspective will provide a valuable foundation for future efforts to improve this trait in dry bean. “Nitrogen fixation is controlled by many, many different genes. And each of the regions in the genome associated with nitrogen fixation might be contributing a small part of the plant’s nitrogen-fixation capacity. However, once the genes are identified and genetic markers are developed for them, breeders could screen their breeding materials for multiple markers at once. And that could result in a positive shift in nitrogen fixation in dry bean.”